Tallinn, Estonia: Belarus on Tuesday held a state funeral for its foreign minister who died suddenly at age 64, triggering speculation about possible foul play in his death after he leaned toward Western countries.

Belarusian authorities didn’t give the cause of Vladimir Makei’s death on Saturday. He wasn’t known to suffer from any chronic illness. 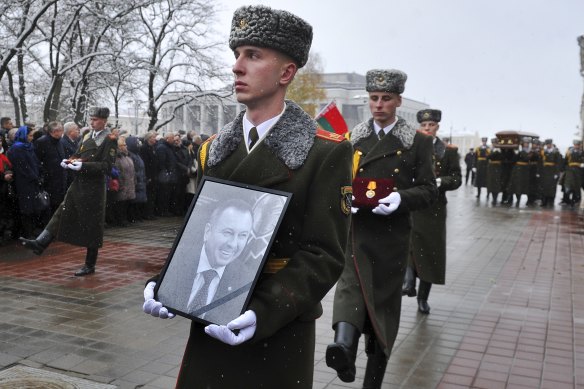 Members of the Honour Guard carry a portrait, awards and the coffin with the body of Belarusian Foreign Minister Vladimir Makei during his farewell ceremony at the Central House of Officers in Minsk, Belarus.Credit:AP

Some media and observers alleged without offering evidence that Makei could have been poisoned by security agencies of Belarus’ main ally Russia, which has warily watched Makei’s efforts to negotiate a rapprochement with the West.

Makei has been a top associate of Belarusian President Alexander Lukashenko for more than two decades. Many analysts saw his diplomatic maneuvering as part of Lukashenko’s efforts to improve ties with the West, which were frozen after a brutal crackdown on protests that followed his 2020 re-election that the opposition and the West deemed rigged. 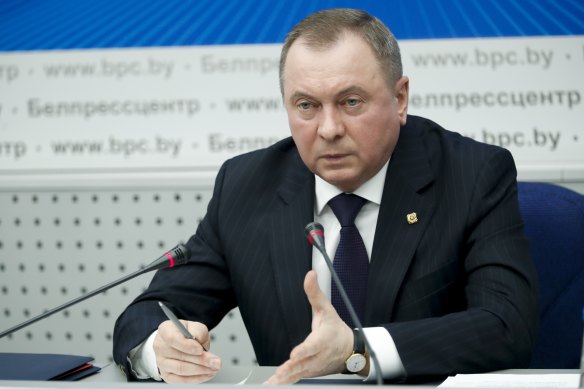 Belarus’ relations with the West were further strained after the country hosted Russian troops that invaded Ukraine on February 24.

While Makei has remained steadfastly loyal to Lukashenko amid the crackdown on the opposition, he has been seen as more liberal compared to the Belarusian leader and other members of his entourage.

A day before his death, Makei met in Minsk with the Vatican’s envoy, Apostolic Nuncio, Archbishop Ante Jozic, in what some saw as part of Belarus’ maneuvering to mend ties with the West.

Next month, he was scheduled to travel to Poland to attend a meeting of the Organization for Security and Cooperation in Europe, a trans-Atlantic security grouping.

“Makei was holding open the window of opportunity for establishing a dialogue with the West, giving Lukashenko some room for manoeuvre and bargaining with the Kremlin,” said Artyom Shraibman, an independent political analyst.

“Makei has earned a reputation as the main pro-Western voice in the Belarusian government, so it’s not surprising that his death has fuelled numerous conspiracy theories.”