A shade of shame at a monument to rosé wines

Once a relative niche, the pink drink has become astronomically popular here in recent years. 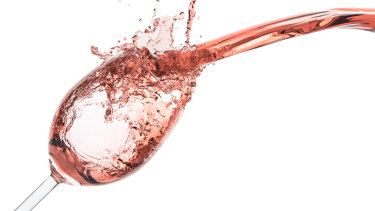 Rosé is the talk of New York.Credit:Shutterstock

The trend started in the Hamptons, the seaside community to where many wealthy New Yorkers retreat during the warmer months.

Bottle shops in the area had to implement rationing a few years ago, limiting customers to four bottles each so stock didn't run out.

The vast majority of New Yorkers can't afford a home in the Hamptons, but for under $15 they can buy a crisp, refreshing bottle of rosé. It's an aspirational drink – redolent with associations of opulence and hedonism without being that expensive.

Full disclosure: since moving here I have become a prolific rosé drinker – at times with mortifying results. A cinema attendant recently caught me trying to smuggle several cans into a movie screening and confiscated them. 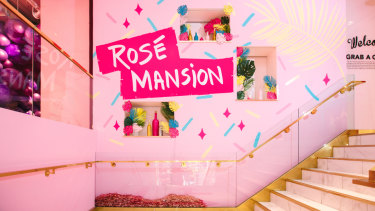 The Rosé Mansion in mid-town Manhattan

In search of a more elevated experience, a friend and I visited the Rosé Mansion, a privately-owned self-described "wine bar, amusement park and museum of science for wine" in mid-town Manhattan.

The pop-up attraction made its debut last northern summer and most sessions quickly sold out. This year it moved to a much bigger 3000-square-metre space near Pennsylvania Station.

The crucial thing to know about the Mansion is that – despite the marketing spiel – the point is not to drink rosé. Or learn about rosé. 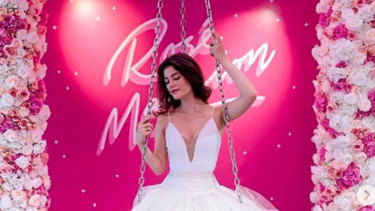 People dress up especialy for photographs at the pop up attraction in New York.Credit:Instagram

Depending when you visit, the 1½-hour "interactive experience" costs $US35 ($52) or $US45. In exchange, you receive eight 30-millilitre samples of wine: a glass-and-a-half in total.

You come here for one reason alone: to take pictures in front of a variety of colourful backdrops and upload them to social media.

Our group of participants was almost entirely comprised of women in their 20s to 40s. Most came prepared for a professional photo shoot, in full make-up and glamorous outfits.

One had recently broken up with her boyfriend and was on a mission to show her social media followers how much she was enjoying single life.

The experience involves moving through a dozen themed rooms, each of which has at least a tenuous connection to rosé.

One of the first exhibits looks like the set of a low-budget movie about ancient Egypt. There are hieroglyphics on the walls, stone lions and bunches of plastic grapes. You are served a thimble-sized sample of Brachetto, a sweet sparkling red wine that was apparently a favourite of Cleopatra. It's not technically a rosé, but this is not a place for pedantry.

In the 1960s-themed Acid Room – where garish rainbow swirls cover the walls – you sample an especially acidic variety of rosé. In a room painted to look like the Hamptons, you drink a wine from the Hamptons. You get the idea.

Along the way you can also lounge in a bathtub filled with fake petals, jump out of a plastic birthday cake and prance about in a Moulin Rouge-style headress.

For an experience that's supposed to be carefree, I found it surprisingly discombobulating. It was hard to tell if people were performing having a good time, or actually having one.

It seems I'm not alone in feeling a little unsettled by the experience.

According to The Atlantic‘s Taylor Lorenz, an astute observer of internet culture, the social media pendulum is swinging away from the brightly-coloured and artificial aesthetic of the attraction. The latest generation of Instagram influencers strives for a messier, more authentic vibe and even edit their photos to make them look less polished.

As for rosé itself, it could well become a victim of its own success. The wine has become so popular that it is rapidly losing its decadent sheen.

"At this point you have to wonder, ‘Would rosé even drink rosé?’" broadcaster Gennaro Pecchia told The New York Post last year.

For now though, the mansion is still drawing big crowds. And while it may be the epitome of everything that's wrong with our modern social media age, it can also provide moments of harmless escapism.

At the end of the tour, as I splashed around in a disco ball pit like a giant toddler, I felt my cynicism fade and my serotonin levels rise.

That night I opened up Instagram, uploaded a photo from the Acid Room and watched the likes start coming in.

I felt a twinge of shame, but not regret.