A Rochester police officer wrote ‘make him a suspect’ on an incident report about Daniel Prude’s death as city officials tried to delay the release of body camera footage, documents show 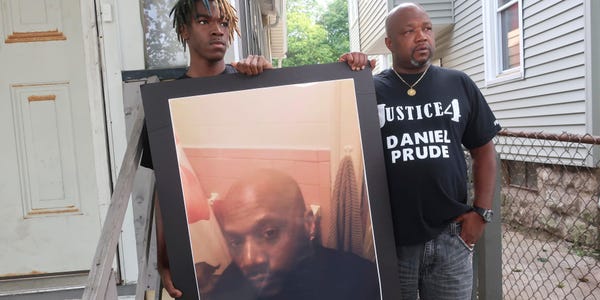 A Rochester police officer wrote "make him a suspect" on an incident report about the department's fatal encounter with Daniel Prude, and it was just one of many ways officials tried to keep information on what happened from going public, according to emails and documents released as part of the city's internal investigation into what happened.

Daniel Prude died in March, one week after police put him in a "spit hood" and held him down until he became unconscious. Prude's brother had called 911 saying Prude was experiencing a mental health crisis.

Rochester Mayor Lovely A. Warren fired the city's police chief on Monday, days after the chief said he had plans to retire. Several other police officers have been suspended.

The city's internal investigation report, also released on Monday, found city officials, including police officers, may have engaged in conduct that suppressed video footage of the encounter with Prude and attempted to mislead others about what happened.

"This initial look has shown what so many have suspected, that we have a pervasive problem in the Rochester Police Department," Warren said of the internal investigation. "One that views everything through the eyes of the badge and not the citizens we serve. It shows that Mr. Prude's death was not taken as seriously as it should have been by those who reviewed the case throughout City government at every level."

The report seen by Insider includes 325 pages of documents and emails in which officers discussed a concern of "blow back" in the community over Prude's death, as well as multiple attempts to control the narrative.

In one document, first flagged by The New York Times, a police officer circled Prude's name, and wrote the words: "Make him a suspect."

The comment was written after another officer had listed Prude as an "individual" in a document's "victim type." According to The Times, police believed Prude had broken a window at a store the night of the fatal encounter.

In other documents released as part of the investigation, city officials tried withholding body camera footage of the incident, attempted to influence Prude's autopsy, and failed to respond to requests made by the attorney representing Prude's family in a timely manner.

One email shows Deputy Police Chief Mark Simmons, who is now the city's acting police chief, telling then-Chief La'Ron Singletary in June: "We certainly do not want people to misinterpret the officers' actions and conflate this incident with any recent killings of unarmed Black men by law enforcement nationally. That would simply be a false narrative, and could create animosity and potentially violent blow back in this community as a result."

The documents were released amid ongoing Black Lives Matter protests in Rochester, in which demonstrators have accused local officials of misconduct in Prude's death.

In her report on the internal investigation, Mayor Warren said she was not aware of body camera footage of Prude's fatal encounter with police until August 4.

"It is hard to rationalize how anyone who saw the video of Mr. Prude's encounter with the RPD did not fully equate these events beyond a few mentions of bad publicity, politics, process or a 'false narrative,'" Warren said in her report.

"These incidents reveal that the culture of acceptance and insularity is more pervasive than we realized, which is why I am recommending the U.S. Department of Justice conduct its investigation."