A Cheesy Toast to Dream About

This riff on Welsh rarebit puts that wilting spinach in the fridge to use in a creamy, verdant lunch. 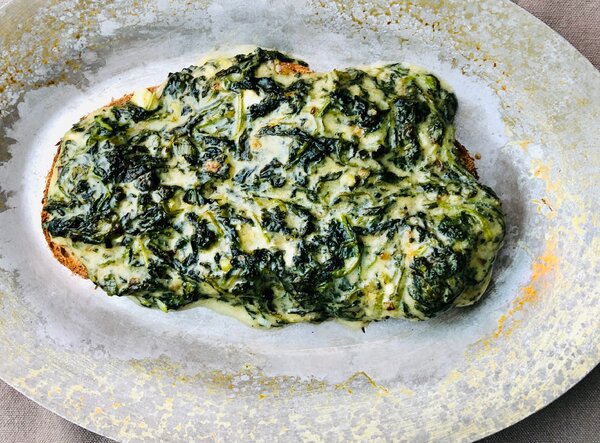 There’s a classic early 20th-century comic strip by Winsor McCay in which, after eating a Welsh rarebit close to bedtime, characters fall into wild, vivid dreams — often horrible, always bizarre — then wake up regretting their choice of dinner. Called “Dream of the Rarebit Fiend,” I think about it every time I make myself the cheese toast, and Tuesday was no exception.

A traditional rarebit recipe calls for melting Cheddar or a similar cheese, mustard and Worcestershire into a sauce thinned down with beer or milk. But, wanting to use up some droopy spinach at the back of the fridge, I decided to add it to the pan along with a little feta.

The spinach turned my cheese toast into a complete meal — both exceedingly creamy and full of healthful greens. And the feta rounded out the mellow Cheddar, adding a welcome tang.

To make one rather large rarebit, put 5 ounces of baby spinach in a colander in the sink. Bring a kettle of water to a boil and pour it over the spinach to wilt it. Let the spinach cool completely, then use your hands to squeeze it tight. You could pretend the ball of spinach is a stress reliever, and that tomorrow is your kid’s first day of sixth grade during a pandemic. My spinach dried right out. Now, chop the spinach coarsely.

Toast a thick slice of country bread, and put it on a broiler-safe pan. If you like, you can rub the cut side of a halved clove of garlic all over the toast, letting the garlic mash into the toast crumb. I did, and was glad I did, but it’s not traditional.

Chop up a couple of scallions or a small shallot, and sauté in a tablespoon of butter or olive oil until very soft, about 3 minutes. Add a heaping teaspoon of flour, and cook it for a minute so it toasts slightly, then stir in the spinach, a teaspoon Worcestershire sauce, ½ teaspoon dry mustard powder (or a teaspoon Dijon mustard), and a splash of beer, wine or milk. (I used the white wine from my glass, about 1 to 2 tablespoons.)

When the spinach is well distributed in the pan, add 1 cup shredded Cheddar and ⅓ cup crumbled feta, and stir the ingredients over low heat until it melts. Don’t worry if the feta doesn’t completely dissolve. A few white nuggets amid all the green will be fine.

Scrape the spinach mixture onto your toast, and broil it until the cheese bubbles and singes in spots, 1 to 3 minutes.

Serve immediately. Then put a notebook next to your bed for jotting down any vivid dreams, just in case.