The EU Commission President delivered a speech at the International WDR Europaforum on Thursday, ahead of a crucial health meeting of G20 leaders in Rome today. Ms von der Leyen used the address to take the opportunity to take a swipe at the UK and the US over vaccine exports, arguing the EU is “the only region in the world that has managed to provide for its own population while giving others their fair share”.

Gloating about the EU’s vaccine strategy, she said: “Initially, there was a great deal of criticism of the EU. But what counts in the end is that, day-after-day, the European Union is reliably supplying vaccine for its 450 million citizens. And we can say we did this together – as a community.

“Using that as a benchmark, our European vaccination campaign is a success. Let me quote a few up-to-date figures. By the end of this week, around 260 million doses of vaccine will have been delivered in Europe.

“That is already more than enough to vaccinate half of all adults in Europe.”

She continued: “Things are going well. The objective is that, by the end of July, 70 percent of all adults in Europe will have been offered a jab. Let me put that figure into context – 70 percent by July is almost the same goal that the USA has currently set. 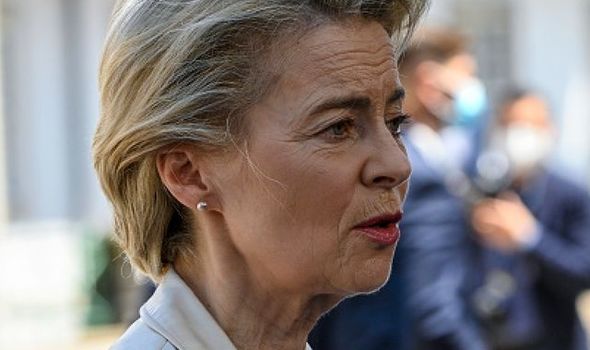 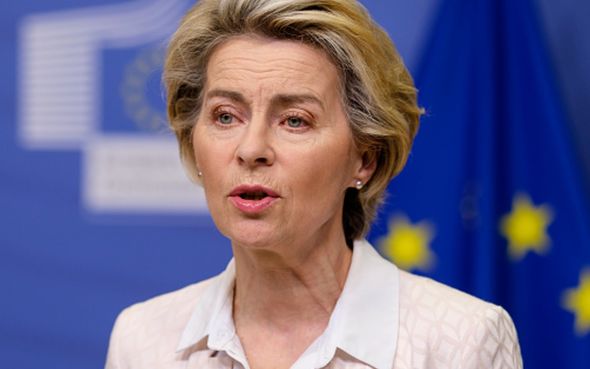 “This shows how much the pace of our vaccination campaigns has now converged. It is true that certain countries, such as the USA and the UK, were somewhat faster initially. But we have caught up since then.

“It is always worth looking at the big picture when making such comparisons. Other countries are keeping their entire vaccine production for themselves. Europe will reach its vaccination goals without cutting itself off.

“We are now the world’s biggest vaccine exporter.

“To date, we have exported more than 220 million doses to the rest of the world, about the same number of doses we have administered in Europe. Vaccines produced in the EU are being sent to close allies such as Canada and the UK.

“We are supplying our friends in Japan, Singapore, Mexico and Colombia, as well as the COVAX vaccine alliance set up to help poorer countries.

“We are the only region in the world that has managed to provide for its own population while giving others their fair share.

“We can all be proud of the fact that in this crisis Europe has set an example of fairness and openness.”

The speech comes ahead of the G20 health summit in Rome today were leaders of the world’s largest economies are expected to adopt a declaration recommending voluntary actions to boost COVID-19 vaccine production, snubbing a push from the United States and other nations on patent waivers, the final text shows.

DON’T MISS:
Naga Munchetty corrects herself over vaccine passport comments [VIDEO]
Who can book their Covid vaccine now? Booking extended again [INSIGHT]
Covid vaccine side effects: Will I still get side effects after dose 2 [DATA] 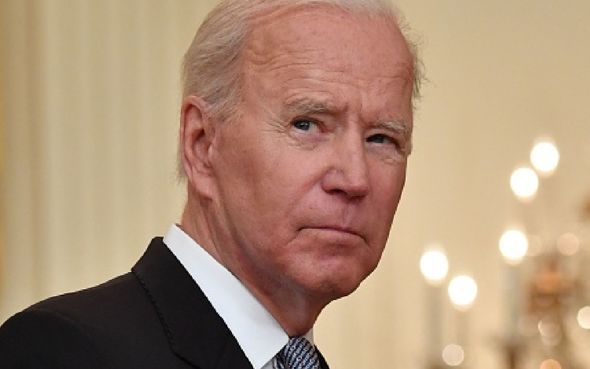 Several G20 leaders will speak at the summit, one of this year’s major events to coordinate global actions against the pandemic.

US President Joe Biden is not listed among the speakers, with Vice President Kamala Harris representing the United States at the meeting, an EU Commission spokesman said.

The EU executive, which co-hosts the summit with the Italian government, is set to announce it will set up three manufacturing hubs in Africa this year to boost long-term production of vaccines, one EU official told Reuters.

The official said drugmakers are also set to announce on Friday they will provide large supplies of at-cost COVID-19 vaccines to poor nations this year to try to redress a global imbalance.

Among the drugmakers expected to announce doses for poorer nations are vaccine partners Pfizer and BioNTech , the official said, adding that at least two other companies are expected to make announcements today.

It is not clear whether the announcements will concern new doses or vaccines already pledged. BioNTech declined to comment and Pfizer was not immediately available to comment.