On Dec. 29, 1890, along the Wounded Knee Creek on the Pine Ridge Reservation in the southwest corner of South Dakota, the U.S. Army killed hundreds of unarmed members of the Lakota Sioux tribe, including many women and children.

In the aftermath of one of the bloodiest acts of violence against Native Americans by federal forces, the government looked into the conduct of the troops of the Seventh Cavalry — and decided to award 20 Medals of Honor, the nation’s highest military commendation, to soldiers involved in the massacre.

Now members of the tribe are stepping up a long-running pressure campaign to have those medals rescinded, saying that the government should recognize the atrocity for what it was and take a step that could help heal the historical wounds of that day.

They recently won support from the State Senate in South Dakota, which passed a resolution in February urging Congress to investigate the award of the medals. On Capitol Hill, supporters of the effort, led by Senators Elizabeth Warren of Massachusetts and Jeff Merkley of Oregon, both Democrats, are hoping to make a new push on behalf of legislation they have sponsored, the “Remove the Stain” bill, that would rescind the medals.

“I believe on our reservation, we have a pervasive sadness that exists here because of what happened at Wounded Knee, the massacre, and it has never been resolved and there has never been closure,” said Marcella Lebeau, a citizen of the Two Kettle Band, Cheyenne River Sioux.

Ms. Lebeau, a 101-year-old veteran who served during World War II as a surgical nurse near the front at the 25th General Hospital in Liège, Belgium, and later worked for the Indian Health Service, is among those pushing for the medals to be rescinded. Ms. Lebeau said she was especially bothered by the fact the country’s most prestigious military decoration was awarded to men who slaughtered women and children.

Many of the award citations noted “gallant conduct in battle” and “distinguished” or “conspicuous” bravery, while documenting few details to justify those characterizations.

To date, the nation has awarded more than 3,500 Medals of Honor, including about 400 to soldiers who fought during campaigns against Native Americans. About 900 awards have been rescinded, according to the Congressional Medal of Honor Society, most for awards made during the Civil War, but no medals awarded for service in the Indian campaigns have been revoked.

Troy Heinert, a Democrat who serves in South Dakota’s State Senate, sponsored the resolution calling for a congressional inquiry. Mr. Heinert, a member of the Rosebud Sioux Tribe, said Congress and the Biden administration owed it to Native Americans to take a closer look at stripping the medals from soldiers involved in the massacre. The resolution passed unanimously in a deeply Republican state.

The medals for service in the U.S. Army’s Indian War campaigns are part of the country’s history of celebrating divisive figures as heroes, Mr. Heinert said. Many of the medals given out during this time were for violent acts against Native Americans by white settlers and the federal government as they sought to occupy more of the South and the West. 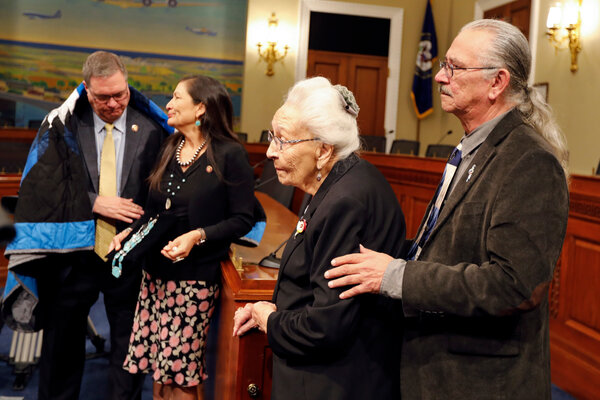 The decades-long push to rescind the medals gained new momentum last year amid a broader national wave of reckoning about historical and systemic racism, with Confederate monuments coming down, the military backing efforts to rename military bases in Southern states that now honor Confederate generals and demonstrators holding large protests against the killings of Black men and women by the police.

“The U.S. government did everything they could to exterminate and assimilate the Indigenous population in our country,” Mr. Heinert said. “Our ancestors fought and died to keep our language, keep our tradition and keep our ceremonies, and I think the climate has put us in a space and time that allows us to have a frank conversation about public policy and what it means to be Indigenous in this country.”

Kevin Killer, president of the Oglala Sioux Tribe, said the push to rescind the medals honored the wishes of elders whose calls went unheard for generations. Mr. Killer said it was important for future generations to know an injustice was addressed.

“It was one of the largest atrocities in the history of this country, where mostly women and children were massacred because they were trying to have peace,” Mr. Killer said. “History tries to retell it and say there was a misunderstanding, but it was an atrocity any way you look at it.”

Bernardo Rodriguez, a tribal council representative for the Wounded Knee District of the Oglala Sioux Tribe, said that the community was reminded every day about the tragedy by a memorial to it — and that action by the government to rescind the medals was more than 100 years overdue.

“We’ve been pushed, pulled, put aside and treated like second-class citizens since Day 1 and never given a chance,” Mr. Rodriguez said. “I want them to know and to understand that this would be the same as giving a Medal of Honor to the Nazis of Auschwitz.”

Despite some bipartisan support for rescinding the medals, it is not clear whether Congress or the Biden administration might act on the issue. The Medal of Honor is awarded by presidents, but it can be rescinded by Congress.

Representative Dusty Johnson, a South Dakota Republican, said in a statement that Congress understood that it was a mistake to award the medal to those who took part in the massacre. Mr. Johnson’s statement said he asked the Army in 2019 about starting a formal review but was told that only the president had the power to do so.

In 1990, the descendants of Native Americans killed and injured during the Wounded Knee massacre received an apology from Congress after lawmakers approved a resolution expressing “deep regret” for the Army’s actions.

The resolution did not provide reparations to the descendants or declare the remote site a national monument, as the Wounded Knee Survivors Association had requested.

“This was a sin of our nation and the United States Congress has issued a formal apology; that doesn’t make the massacre go away, but it’s those kinds of efforts toward reconciliation that I think can help mend hearts and minds and give it the opportunity to move forward,” Mr. Johnson said.

“Medal of Honor recipients of today are held to a tremendously higher standard,” he said. “It’s painfully clear from our history, the U.S. didn’t have these same standards in 1890.”

In 2019, Senator Mike Rounds, a South Dakota Republican, said that he believed Wounded Knee was a massacre rather than a battle, but also that he opposed going back to changing the recommendations to bestow the medals.

Ms. Warren’s office said the bill remained a priority for her, and she and an array of Democratic sponsors have reintroduced it into both the House and the Senate for the current Congress to consider.