WASHINGTON — Anti-abortion demonstrators descended on the National Mall in Washington on Friday for an annual rally a day after Republicans in the Senate were slowed in their efforts to advance a ban on federal abortion funds.

Organizers had pledged to go on with the event, called the March for Life, in a capital full of shuttered federal agencies because of a partial government shutdown.

While thousands of demonstrators marched and cheered on guest speakers, the climate in Washington this year was not the same as a year ago, when Mr. Trump hosted some of the marchers in the Rose Garden with enthusiasm after having just broadened religious freedom protections for health care providers who were opposed to performing abortions and gender reassignment surgery. 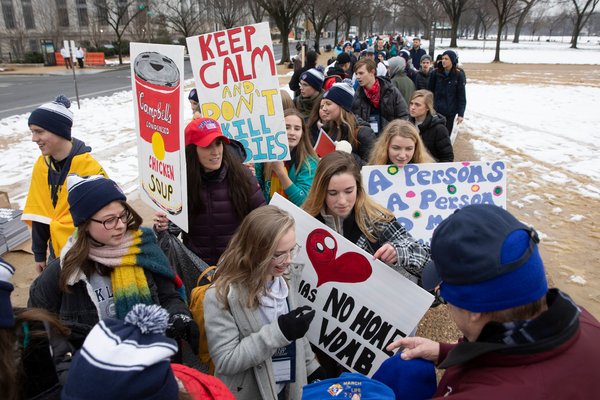 This year, Mr. Trump addressed the crowd in a prerecorded message and said he had sent a letter to Congress notifying lawmakers that he would veto any legislation that “weakens the protection of human life.” He also said he supported a Senate proposal that would have permanently prohibited government funding to be used for abortion. The bill failed to advance Thursday when Republicans lost a vote to proceed.

Vice President Mike Pence and his wife, Karen, made a surprise stop at the rally on Friday. Mr. Pence, who was scheduled to speak at the organization’s annual dinner that evening, told demonstrators to remain strong.

“And know that we will stand with you until that great day comes where we restore the sanctity of life to the center of American law,” Mr. Pence said.

With Mr. Trump’s appointment of two conservative Supreme Court justices, anti-abortion conservatives have been hopeful that the high court would, in the future, overturn the landmark 1973 decision that provided a constitutional right to abortion. Fearing this outcome, abortion rights groups have shifted their focus to states to lobby governments to keep the protections intact.