State of play: As election looms, Democratic candidates hold their tongues on Trump

BETHESDA, Md. (Reuters) – Beyond the vegan meatballs and “Medicare For All” T-shirts, there was something else notable at a Democratic rally last week in the Washington suburb of Bethesda, Maryland: direct, no-holds-barred condemnation of the president.

“We need somebody who can stand up to Trump!” one candidate for local office told the crowd. Another compared Donald Trump with Russian President Vladimir Putin. But they were just warmup acts for the main event, the blunt former presidential candidate Bernie Sanders, who while technically an independent is a champion of causes held dear by liberal progressive Democrats.

Trump, Sanders said, was “the most racist, sexist, homophobic, bigoted president in history,” adding later for good measure that Trump was a “pathological liar.”

The crowd thundered in approval.

Sanders, a U.S. senator from liberal Vermont, is expected to win re-election easily in Tuesday’s congressional elections, so he took little political risk in bashing the president. Still, his rhetoric on the stump made for a stark contrast with most Democratic candidates.

Democrats have largely resisted excoriating Trump on his words and actions, although he has denounced the party at his political rallies as an angry, dangerous “mob.”

As recently as last week, when Trump was accused of sowing division with his response to the synagogue shootings in Pittsburgh and harsh rhetoric on migrants traveling to the U.S. border from Central America, voters heard little about that from Democrats running for Congress.

Democratic candidates were much more likely to be talking about healthcare or economic inequality. That was by design. The party, early in this congressional election season, made a collective determination not to regularly confront the president, according to multiple party sources.

That has left many Democrats, particularly those from the party’s liberal progressive wing, frustrated. They accuse the party of being too timid, too afraid of alienating moderate voters. They argue that the party needs to find its critical voice during what they see as a national crisis – and that they risk not making a clear case to voters about the values for which the party stands.

Linda Sarsour, a party activist and an organizer of the nationwide Women’s March, which was fueled by anger over Trump’s 2016 victory, argued that Democrats must “unapologetically call out the president” while providing their own vision for the country.

“We have to have a very clear alternative,” she said. “We have to give America two choices here.”

By and large, however, Democratic candidates and party elders such as David Axelrod, the former top campaign aide to President Barack Obama, contend that sticking to “kitchen-table” issues is a better way to win over voters than being drawn into culture wars and the swirl of controversy that Trump regularly generates.

Independents and moderates, they say, want candidates who exhibit maturity and stability.

Besides, Trump certainly is never far from voters’ minds, they add.

“Trump is just so baked into the equation,” said one Democratic strategist working on House of Representatives campaigns, who asked to remain anonymous so he could freely discuss the party’s thinking. “Candidates have been remarkably disciplined about not being distracted by shiny objects.”

Frank Sharry, a longtime advocate for immigrant rights at the advocacy group America’s Voice, said candidates “are in a really tough spot. If you engage, you give Trump what he wants, a debate about a topic that he wants to be discussing.”

Even so, Sharry said he would like to see more Democrats address Trump’s “divisiveness and demagoguery.”

Two who have tried are Beto O’Rourke, a Democrat running for the U.S. Senate in Texas, and Andrew Gillum, the Democratic candidate for Florida governor, both of whom regularly criticize the president’s policies and tone.

Nevertheless, electoral projections support the restrained approach. Polls show Democrats on Tuesday should win the 23 seats they need to assume control of the House of Representatives and perhaps as many as 15 or 20 seats beyond that. Democrats are expected to fall short of the two seats they need to reach the majority in the Senate.

The party believes it has heeded a lesson from Hillary Clinton’s 2016 presidential campaign, which is now viewed by strategists as overly focused on finding fault with Trump rather than affirming Clinton’s own agenda.

The road map for this year’s strategy was drawn last year by Virginia Democratic gubernatorial candidate Ralph Northam, who handily defeated Republican Ed Gillespie by emphasizing economic issues while Gillespie stoked fear among voters over immigration and crime – much like Trump at his late-stage campaign events.

With Trump’s every provocative word seemingly splayed across cable news daily, the strategy has often led to a jarring juxtaposition outside of Washington. It has not been unusual for a Democratic campaign event to occur with no reference to the president.

The Wesleyan Media Project, which tracks campaign ads by subject matter, said in September that the president was mentioned negatively in less than 5 percent of TV ads to that point – rarer than in the previous three congressional midterm elections.

The small minority of ads that do attack Trump includes those by “Need to Impeach,” an advocacy group founded by California billionaire Tom Steyer. 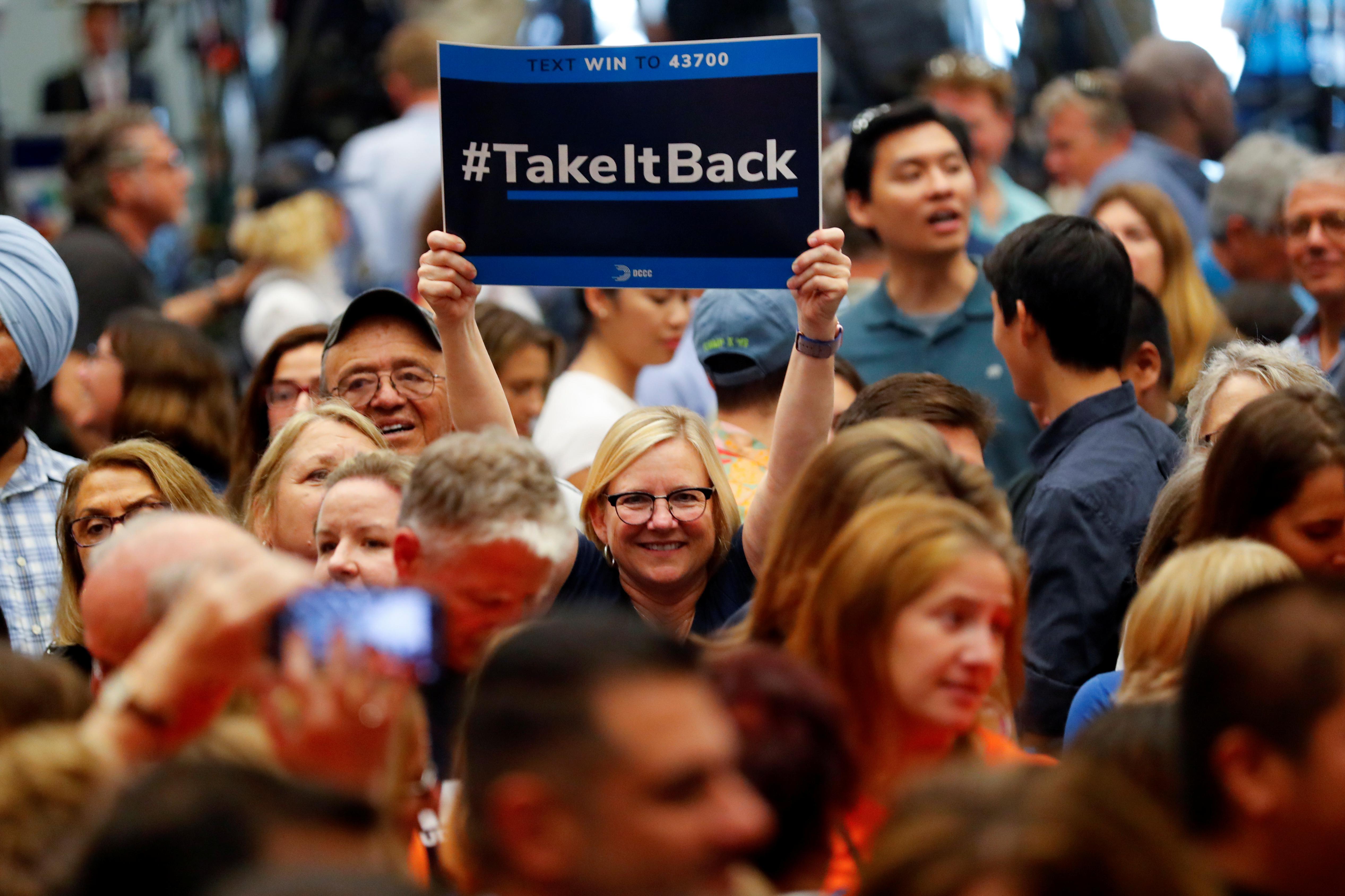 Kevin Mack, the lead strategist for the group, said voters it had surveyed were more motivated by antipathy for Trump than anything else, and that Democrats remained too “risk averse.”

If they fall short on Tuesday in any regard, he said, it will be because they held their tongue on Trump.

“You can hold the president accountable and say you’ll fix healthcare at the same time,” Mack said.