ALBERT LEA, Minn. — The Republican attack ads targeting George Soros and Colin Kaepernick were the first to arrive in southern Minnesota last month, so closely echoing President Trump that he could have written them himself.

Then came the caravan.

This latest ad — part of a multimillion-dollar blitz from Republican groups in this battleground House district — warns of “a caravan full of illegal immigrants marching on America,” bringing with it “gang members and criminals.” Grainy video shows Latin American men pumping fists in the air.

As Republicans scramble ahead of Tuesday’s election to try to save their majorities in the House and Senate, many party officials and candidates like Jim Hagedorn, the nominee here in Minnesota’s First District, have concluded that their best shot at victory is embracing the Trump political playbook of demonization.

The goal — through overt, frontal attacks on prominent liberals, minorities and immigrants — is to stoke an us vs. them narrative about the country’s security, culture and heritage, in hopes of getting conservatives to see the election as a battle to save the nation’s future.

Beyond rural Minnesota, in districts across Ohio and New York, Republicans believe the strategy is resonating, and may help them win some races Tuesday as their 23-seat majority comes under attack.

Mr. Hagedorn is making his fourth run for the seat, and was once widely regarded as a weak candidate because of a long record of sexist and insensitive remarks about a number of minority groups — the conservative Washington Examiner called him “the worst Republican candidate in America.” Yet polling indicates a tight race, giving the G.O.P. one of its few decent chances of flipping a Democratic-held seat this year.

Republicans are also defending dozens of other seats that the party now holds, but they are finding that in many places the Trump playbook can go only so far before it backfires.

In the affluent, educated suburbs where much of the political battleground is, Republicans are framing immigration less as a cultural issue with implications for the country’s identity and more as a question of security by drawing attention to sanctuary cities, which limit cooperation between local law enforcement and federal immigration officials, and MS-13, the violent transnational gang.

In the handful of more rural, conservative-leaning districts where the party has a better shot of winning, the message is blunter.

In Minnesota, ads from groups like the Congressional Leadership Fund and the National Republican Congressional Committee try to link Mr. Hagedorn’s opponent, Dan Feehan, to people and themes that conservatives have portrayed as a threat, like Mr. Soros, the liberal philanthropist who has been smeared with anti-Semitic attacks; Mr. Kaepernick, the black football player famous for kneeling during the national anthem; and now the migrant caravan.

In one, a doctored image appears to show Mr. Feehan, an Army veteran, saluting Mr. Kaepernick. Another shows Mr. Kaepernick alongside two other favorite villains of conservatives — Nancy Pelosi, the House Democratic leader, and Keith Ellison, the Minnesota congressman who is black and Muslim and is now facing abuse allegations as he runs for state attorney general. Mr. Feehan’s face appears on the screen, and the announcer intones, “He’s one of them.”

Ads like these have aired repeatedly across the district’s 12,000 square miles of farmland and small towns, making it what Republicans say is the most active political laboratory for the bald appeals to white racial and cultural anxieties that President Trump and many Republicans are using to drive conservatives to the polls.

The First District, which is 90 percent white, fits the demographic profile of many of the places where Mr. Trump has been confined to campaigning by Republicans who do not want him in more diverse districts. Given Mr. Trump’s self-described “nationalist” views, some Republicans believe their path to staying in power in the Trump era is increasingly narrow and heavily dependent on the parts of the country that are the most white and rural.

Jason Hulburt, a production line supervisor from Albert Lea, said he planned to vote for Mr. Hagedorn on Tuesday, a choice he made in part because of how important he thinks it is for Mr. Trump to have like-minded Republicans in Congress.

“Donald Trump knows what he wants, and the Democrats are afraid of the issues Trump talks about,” he said Friday night as he finished a brandy and water at Eddie’s, a local bar. “They’re afraid to offend certain people. Trump is not afraid.”

Republican strategists argued that such pinpoint tactics worked for Mr. Trump in 2016 and could work again.

“They are going to all the right places,” said Scott Reed, the chief political strategist for the United States Chamber of Commerce. “That’s what has me optimistic. The president’s energy level and where they land the plane could be the difference on Election Day.”

Mr. Trump’s playbook represents an extraordinary break with recent Republican presidents like the Bushes and nominees like Mitt Romney and John McCain. They sought to grow the party with appeals, however limited, to Hispanic voters, women and culturally conservative immigrants. 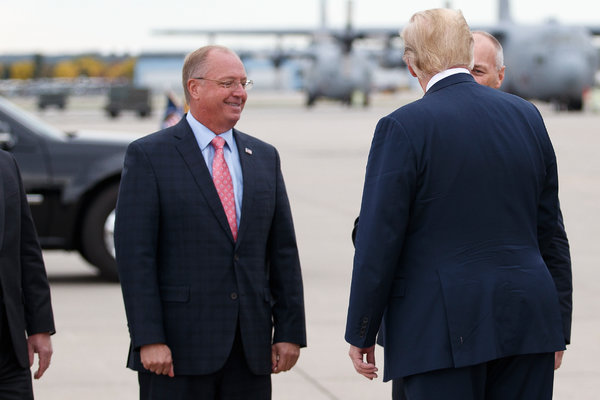 Mr. Trump, who promised after his victory in 2016 to be a president for “all Americans,” has been fixated this year on visiting states that were critical to his Electoral College win and doubling down on nurturing his homogeneous base in those places. Many Republicans privately worry that in terms of the future health of their party, the outreach and agenda they are pursuing feels a lot like the president’s travel footprint: provincial and small.

“No one has repealed the long-term demographic trends in the country,” said Whit Ayres, a prominent Republican pollster. “At some point, Republicans are going to have to reach out beyond the base if they hope to win a majority of the popular vote in the future.”

When Air Force One touched down in West Virginia on Friday, for instance, it was Mr. Trump’s eighth visit to the state that delivered him his largest share of the vote anywhere — 68 percent — and in a congressional district that is 93 percent white. The districts he plans to visit through Monday night have very similar compositions: Indiana’s Third District around Fort Wayne is 83 percent white, while Tennessee’s Third in Chattanooga is 82 percent white.

Even on his trips over the last few days to Florida, a state that is 45 percent nonwhite, Mr. Trump held his rally in a district near Fort Myers (70 percent white) and one encompassing Pensacola (73 percent).

The president visited Minnesota’s First last month to campaign for Mr. Hagedorn. Through a spokesman, Mr. Hagedorn declined to be interviewed.

At his rallies lately Mr. Trump has laid out a clear, if misleading, picture of what Democratic control of Congress would look like. It includes, in no particular order, “caravan after caravan”; crime; chaos; sanctuary cities; “birth tourism,” where immigrants can have children who are automatically citizens; and an empowered and emboldened Maxine Waters, the black Democratic congresswoman he has often insulted as “low I.Q.”

A vote for Republicans, by contrast, he said the other night at a rally in central Missouri, represents greatness; “standing up for our national anthem”; more jobs; and the promise “to win, win, win.”

The Battle for Congress Is Close. Here’s the State of the Race.

The math currently favors the Democrats in the House and the Republicans in the Senate.

In interviews, his supporters rejected any suggestion that Mr. Trump traffics in racist or divisive views, saying that the issues the president raised were merely matters of law and order and made good fiscal sense.

“We are a nation of immigrants, but we are a nation of laws, too,” said Stan Hale of Oakville, Mo., who drove two hours for the Trump rally in Columbia on Thursday night. “The other side is so fake when they talk about the little guy, the working class. They don’t care. They only care about votes.”

His wife, Melita, insisted: “Race has nothing to do with it. Race doesn’t even enter the mind.” For her the issue with immigrants was “vetting,” she said. “You don’t know who they are. You just don’t know.”

Mr. Trump’s narrower approach, compared with past Republican leaders, is especially evident in his travel schedule. During the final month before the midterm elections of 1990 and 2002, George H.W. Bush and George W. Bush traveled to far more states than Mr. Trump has, according to data compiled by Brendan Doherty, a political scientist at the United States Naval Academy.

“The big difference with his travel,” said Mr. Doherty, “is President Trump has been spending more time in states that he won quite comfortably.”

The elder Mr. Bush visited 20 states between Oct. 1 and Election Day in 1990; the younger Mr. Bush went to 29 states over the same period in his first term. Strategists familiar with Mr. Trump’s plans said that as of Monday, the president had visited 19 states since Labor Day, which was two months ago.

Mr. Trump’s appeal is already more limited than any other modern chief executive’s, a worrisome fact for Republicans who fear that he will leave the party in a woefully uncompetitive position whenever he leaves office. No president in the history of Gallup’s polling has averaged as low an approval rating as he has during the first two years in office. And he is the only president whose approval in Gallup’s surveys has never exceeded 50 percent at this point into the first term, even for a brief period of time.

Even one of the polling statistics Mr. Trump is proudest of — his approval rating among Republicans, which has been near 90 percent for months — is not quite what it seems.

Americans who identify as Republicans are the smallest part of the electorate, currently below 30 percent, public opinion surveys from Gallup, the Pew Research Center and others show.

“Having 90 percent of the smallest party ID in the country is not necessarily something to brag about,” said Elaine Kamarck, a senior fellow at the liberal-leaning Brookings Institution. “And any way you look at it,” she added, “Trump is not in control of a big piece of the electorate.”

Hey, I’m Alex Burns, a politics correspondent for The Times. Send me your questions using the NYT app. I’ll give you the latest intel from the campaign trail.

One thing the midterm elections will be a test of is whether the most vocal and active slice of Mr. Trump’s voters — a minority of a minority — can swing close elections after two years of a chaotic presidency. Mr. Hagedorn and his campaign staff hope that is the case.

Gregg Peppin, a consultant working for Mr. Hagedorn, recalled an exchange he witnessed Mr. Hagedorn have at a McDonald’s on Friday morning.

“Jim went up to a table of five guys and a woman,” Mr. Peppin said. “And the first words out of the guy’s mouth was, ‘What are you going to do about the caravan?’”