The new year has begun, and so has the nomination process for next year’s presidential election. But what do candidates actually do at this point, when the voting doesn’t start for another 13 months until the Iowa caucuses?

Democrats like Senator Elizabeth Warren, who just entered the race and plans to campaign in Iowa this weekend, will move quickly to try to build grass-roots support and raise money: two prerequisites for any candidates hoping to break out of what is likely to be a congested pack of contenders and position themselves well for big moments like the first Democratic candidates’ debate this June.

The Times talked to presidential campaign veterans, operatives and candidate surrogates about what the Democratic contenders will focus on in these early months. Few would offer predictions on which candidates would be successful, but they identified priorities that are critical in order to emerge as the party’s standard-bearer in 2020.

Like it or not, the first focus of a new presidential campaign tends to be money. So-called exploratory committees, like the one Ms. Warren created Monday, are a vehicle to raise it. Given that more than a dozen Democrats may jump into the 2020 race, candidates who don’t establish themselves as potential front-runners in the next few months can get drowned out, and raising a lot of money early is one way to show a candidacy is viable.

“Successful fund-raising is one of the messages that you want to have available to you as a candidate in Iowa, because it’s an indicator of the ability to sustain a campaign as long as is necessary,” said Jerry Crawford, who has led several Democrats’ Iowa operations.

[Make sense of the people, issues and ideas shaping American politics with our newsletter.]

The exact timing of Ms. Warren’s announcement — Dec. 31 — is significant. It means that in a few weeks, she will have to report her fund-raising totals for the fourth quarter of 2018, which will reveal how much she received on Day 1 in small-donor contributions — a key benchmark for popularity for Democrats in the nominating race.

Another benefit of a full calendar year of campaigning is that it provides candidates with ample opportunity to test, refine or popularize new messages. Some Democrats already have signature tagines: Ms. Warren’s “Nevertheless, we persist,” or the Ohio Senator Sherrod Brown’s “the dignity of work.” Other candidates will be less decided and may try different messages to see what works.

Laura Belin, a close Iowa caucus observer and author on the Bleeding Heartland blog, said it was important for candidates to make residents feel as if they are being courted and their concerns are being heard. This could mean tailoring a national message for a local audience, or being responsive to a particular moment that resonates with audiences.

“With a field like this, I think there will be a lot of late deciders,” Ms. Belin said. “You can’t predict other events: Some people might stumble along the way. But it’s important to really find your message and appeal to people.”

“We joke about how Iowa Democrats are like, ‘I can’t decide because I’ve only met this candidate twice,’ but there’s some truth to that and I feel like that myself. I think highly of a lot of people who are going to run,” she added.

Repeated trips to Iowa can allow long-shot candidates to become better known among voters there, but top-tier candidates can also benefit from a sharpened message. Ms. Warren, for example, did not travel to Iowa before making her campaign announcement and will have to introduce herself anew to voters in America’s heartland.

“She has a reputation of having a tremendous sense of humor, for example, but I don’t think that people in Iowa have seen that, and they need to,” Mr. Crawford said. “She needs to develop a sense of what Iowa is, what the people care about and are concerned about. I think she could do herself well to do some of those quieter conversations, sit-downs with Iowans on her first couple of trips here,” rather than big rallies.

It takes a lot of people to get to the White House, and there are only so many who have experience running successful presidential campaigns. Nobody wants to start a campaign only to find that the best operatives are already committed to rival candidates. 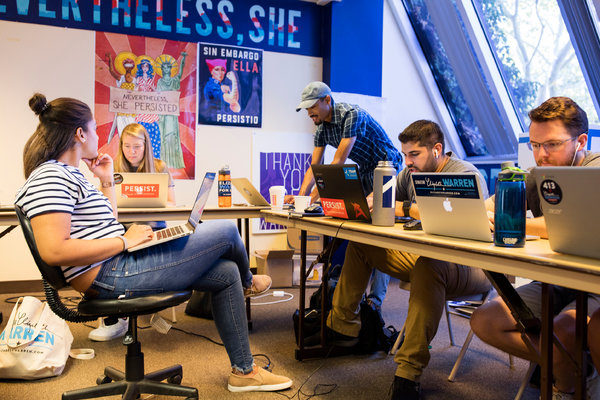 Especially in Iowa, where the caucuses demand intense on-the-ground mobilization, campaigns need a slew of organizers. John Delaney, a departing congressman from Maryland who has been running for the Democratic nomination since 2017, has about 20 paid staff members in Iowa and said he expected that to increase to 25, spread across eight field offices, by the end of January. He also has three staff members in New Hampshire and 15 to 20 at his new campaign headquarters in Maryland.

Ms. Warren will undoubtedly be spending a lot of her time in the coming weeks building a staff at least that extensive, as will any other candidate who decides to enter the race early.

Candidates must also use the coming year to introduce and differentiate themselves on policy grounds, experts said. Retail politics and interpersonal relationships can generate buzz, but in a crowded field, substance will count for just as much as style. Some candidates have already released baseline plans around issues such as tax policy or housing affordability, but 2019 is a time for details.

“In a crowded field, what will be important is the clarity of your vision and your pathway that you show people,” Mr. Delaney said in an interview. “ I think what will differentiate the candidates is the person who can really convince people that they should have faith that my leadership can actually make this happen.”

On a primary debate stage and in rooms with voters, a policy vision gives candidates an air of seriousness. Politically, it can also help a candidate shore up support among voters in more skeptical demographic groups. Ms. Warren, for example, drew praise for her focus on housing affordability, which she targeted at black voters, a key constituency in the Democratic primary. Other Democrats said they were looking to candidates like Senator Kamala Harris of California or Senator Cory Booker of New Jersey, to see if their policies will tap into more populist, anti-Wall Street themes.

“Beyond Trump, every Democratic candidate will need to prove that they have a policy vision to address the deep inequalities of power and opportunity in America,” said Heather McGhee, the former president of Demos, the progressive political group.

She said Ms. Warren had, to this point, led the pack on progressive policy.

“Elizabeth Warren is the Democrat who has released the most comprehensive ideas about restructuring the corporate sector to reduce inequality,” she said.

Every candidate has some sort of weakness or liability he or she needs to address, and those who enter the race early, like Ms. Warren, will want to try to get out ahead of it.

Ms. Warren’s biggest liability, at this point, may be the DNA test she took in an effort to prove her claims of Native American ancestry. Her decision to release the test results angered many Native Americans, as well as progressive Democrats in her base, and some of her own advisers believe she needs a plan to repair the damage. So far, she has refused to apologize publicly, and she shrugged off a reporter’s question this week about the DNA test by saying she had “put it all out there” and people could see the information for themselves.

Mr. Crawford of Iowa said, “If they’ve got challenging issues, like that one is for Senator Warren, I think first of all they need to be prepared to discuss it.”

“They need to be very straightforward about it,” he added.

Virtually all of the expected Democratic candidates have some issue, small or large, that they will have to confront if they run. For Joseph R. Biden Jr., it could be his actions during the Anita Hill hearings; for Senator Kirsten Gillibrand, her role in pushing Al Franken to resign from the Senate in response to sexual misconduct allegations; for Mr. Booker, his ties to Wall Street; for Ms. Harris, elements of her prosecutorial record in California.

The coming weeks, before the campaign really gets underway, will be a good time to identify and even address those potential liabilities.