Ashley Lunkenheimer’s campaign for the Democratic nomination in Pennsylvania’s Fifth Congressional District in May was trailed by whispers from some in her own party: It was fine that she was a lesbian, they said, but were voters ready for that?

Gina Ortiz Jones, a Democratic candidate in the 23rd Congressional District in Texas, faced a similar question, but for her it happened out in the open. An opponent in the primary asked her onstage during a candidate forum to make it clear to voters that she was a lesbian so it would not be “revealed later” in a Republican attack.

Catholic voters in the heavily Hispanic district “may still vote for you, but let’s get it out there,” said the opponent, Angie Villescaz.

“She made it seem like I was hiding who I was from voters, as if maybe I was supposed to mention that in every single sentence,” said Ms. Jones, an Air Force veteran who served under “don’t ask, don’t tell,” a law, now repealed, that banned openly gay men, lesbians and bisexuals from military service. “Her implication obviously was if voters knew, then they wouldn’t be voting for me.”

It was a bump in the road for Ms. Jones, who won the nomination. “The voters proved her wrong,” Ms. Jones said of Ms. Villescaz. Ms. Jones will face Will Hurd, a Republican incumbent, on Tuesday.

But the episode is indicative of the challenges faced by lesbian, gay, bisexual and transgender candidates in the midterm elections, when a record number — at least 244, all Democrats — are running for elected office at all levels of government, including 21 for Congress and four for governor. 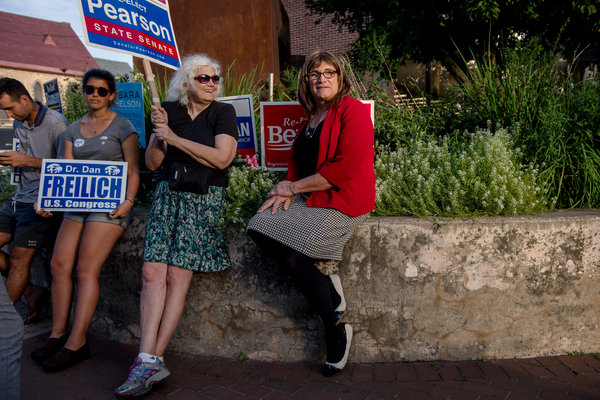 Advocacy groups describe that surge as a “rainbow wave” powered by liberal enthusiasm and increasing social acceptance, but it comes at a time when the L.G.B.T. community faces a hostile White House and an escalating number of bias incidents, particularly against transgender people and people of color. Campaign attacks may be the electoral expression of that.

“As we in the L.G.B.T.Q. community achieve more visibility and acceptance, those who are deeply opposed to the community are alarmed and they strike out,” said Annise Parker, the president of the L.G.B.T.Q. Victory Fund, a nonpartisan group. “Sometimes the attacks take the form of overt anti-gay messages or they are dog whistles or sideways references based on stereotypes.”

For candidates like Ms. Jones and Ms. Lunkenheimer, who lost her primary race, that has meant barbs not just from ideological opponents but from fellow Democrats who express doubt that an L.G.B.T. person can win. Others have weathered death threats, mockery or attacks that blend homophobia or transphobia with sexism and racism.

“Politics is a blood sport and an opponent who is either desperate or tone deaf or who actually believes negative stereotypes will be willing to throw them at you,” Ms. Parker said. “And then to combine them — if one works then why not more?”

In Kansas, a local Republican official resigned after calling Sharice Davids, a Native American lesbian running for the House of Representatives, a “radical socialist kickboxing lesbian Indian” who should be “sent back packing to the reservation.” Rick Neal, a white gay House candidate in Ohio, found white supremacist material outside the home he shares with his husband and black children.

In New Hampshire, a primary opponent accused congressional candidate Chris Pappas of being a weakling — a common trope used against gay men — and in Maryland, State Senator Richard Madaleno, who ran unsuccessfully in the Democratic primary for governor, was mocked by an opponent as someone who “prances around Annapolis.”

In Vermont, Christine Hallquist, the first transgender person nominated for governor by a major party, stopped publicizing her campaign schedule and started traveling everywhere with an aide after she received a dozen or more death threats.

Josh Boschee, a candidate for secretary of state in North Dakota, was derided as a sinner by a radio host who defended Will Gardner, a Republican who dropped out of the race after it came to light that he had a criminal record related to an accusation that he peeped into a window at a women’s dormitory.

“He tried to flip it back on me: ‘Josh’s lifestyle is a sin. If Will Gardner has to resign for this, maybe Josh should too,’” Mr. Boschee said. “It was comparing his criminality to my sexual orientation.”

Attacks on the L.G.B.T. community have piled up since Donald Trump became president. The administration has issued “religious liberty” guidelines to federal agencies and contractors; argued in a 2017 federal lawsuit that the Civil Rights Act of 1964 does not protect gay people; and appointed judges, including the Supreme Court Justices Neil M. Gorsuch and Brett M. Kavanaugh, whose records deeply trouble L.G.B.T. groups.

In the latest attack, The New York Times reported last month that the administration is weighing a change to the legal definition of gender that could render transgender people legally nonexistent.

“Practically from Day 1 the administration has been seeking to undermine our nation’s progress on equality and to embolden some of the darkest undercurrents of our society,” said Sarah McBride, a spokeswoman for the Human Rights Campaign, an L.G.B.T. advocacy group.

Homophobic or innuendo-laden attacks on lesbian, gay, bisexual or transgender candidates are not a new development. Brian Sims, who was the first openly gay state legislator in Pennsylvania when he was elected in 2012, has been receiving threats for years.

He said he had received as many as 20 death threats since July that were “more than just harassment” and 50 to 60 others that were less serious. Over the years, the threats compelled him to swap his first-floor office for one on the 10th and then to move his desk away from the window.

He said many of the attacks might have more to do with his liberal politics than with his sexuality. He often receives hate mail about his support for gun control that is riddled with homophobic slurs, he said.

“Were I a woman or a person of color or Jewish or Muslim, I think many of the attacks against me would involve slurs against those groups,” he said. “Instead, because I am gay and I take positions that infuriate fundamentalist conservatives, they use my status as an openly gay man.”