In a stark display of the nation’s divide, the lower and upper chamber of every legislature but one — Minnesota — will be controlled by the same party following Tuesday’s midterm elections. It will be the first time in 104 years that only one state will have a divided legislature.

That emerging political dynamic has potentially serious policy implications. Without a divided government, these single-party state houses are in a position to enact legislation at a time when Washington faces a new round of gridlock after Democrats captured the House and Republicans expanded their control of the Senate.

The political lineup of the legislatures came into focus as the Democrats captured control of seven statehouse chambers on Tuesday, a relatively weak showing that left Republicans dominant in an overwhelming majority of state governments. By contrast, Republicans seized more than 20 statehouse chambers from Democrats in the critical 2010 midterm elections, according to the National Conference of State Legislatures.

The modest Democratic gains were offset by the party’s victories in governor races. Democrats won seven Republican-held seats, including in two presidential battlegrounds — Michigan and Wisconsin — the G.O.P. stronghold of Kansas and the emerging blue state of Nevada. Republicans held off Democratic challenges in Florida, Ohio and Iowa, among other states.

The district maps drawn by Republicans who took power in state legislatures in 2010 — a midterm election under President Barack Obama that saw steep losses for his party across the board — was one of the reasons for the modest Democratic gains, analysts said.

“These were not big numbers relative to history,” Mr. Storey said Wednesday.

With the election results, the Republican Party will control both houses in 30 states, while Democrats will hold complete control in 18 states. 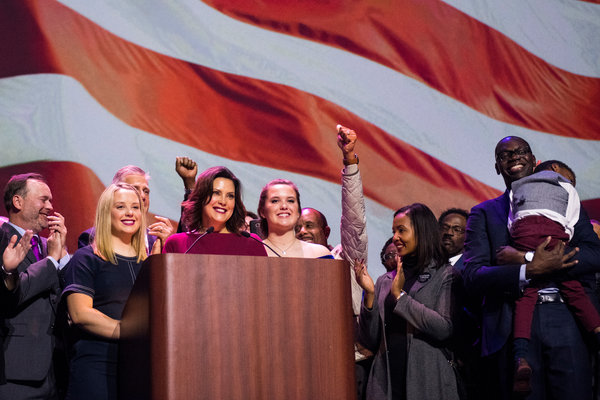 The Democrats picked up the Maine Senate, the New Hampshire Senate and House, the Colorado Senate and the Minnesota House. The Connecticut Senate, which had been tied, went to Democrats as well.

In New York, Democrats gained effective control of the State Senate, upending an arrangement between a handful of Democrats and Republican senators that had given Republicans control of that body, even though Democrats controlled a majority of seats there.

Thirty-six governor’s races were on the ballot on Tuesday in elections that could prove critical as redistricting begins. With their gains on Tuesday night, Democrats will control 23 governorships, compared with 26 for Republicans. One contest — in Georgia, between Brian Kemp, a Republican, and Stacey Abrams, a Democrat — has not been called.

Twelve states will have a governor of one party and a legislature representing the other party.

Democrats said they were pleased with the results, while acknowledging it would take several more election cycles before the party is at parity with Republicans.

“It’s a solid net for us,” said Jessica Post, the executive director of the Democratic Legislative Campaign Committee, which focuses on electing Democrats to statehouses. She said the group spent $35 million this election cycle, more than doubling what it spent in 2016.

“I think we’ll see a ton of progress in these states that we flipped,” she said.

Republicans dismissed the Democratic gains in the statehouses, noting how modest they were and that Republicans held onto legislative majorities in crucial states like Florida, Michigan and Wisconsin.

“We see this as a significantly fumbled opportunity by the Democrats to make gains,” said Matt Walter, the president of the Republican State Leadership Committee, adding that the states where Democrats flipped chambers on Tuesday were all states Ms. Clinton won in 2016. For Democrats, he said, it was a “disappointing night given all the spending and hype.”

Democrats did not succeed in flipping statehouse chambers in key Midwestern states where Mr. Trump triumphed in 2016. Indeed, Republicans held or extended their majorities in some of those states, including in the Wisconsin Senate and the Iowa Senate.

In Ohio, where Mr. Trump won by eight points, Democrats fell short of winning the governor seat. While Democrats picked up a handful of seats in the House chamber, they appeared to have lost a seat in the Senate. And even though Republicans lost seats in the state House, the party will retain a three-fifths supermajority in both legislative chambers, giving them the ability to override gubernatorial vetoes.

In New Hampshire, Democrats flipped both chambers and took control of the Executive Council, which effectively functions as an additional branch of government. Although the re-election of Gov. Chris Sununu, a Republican, was a bright spot for the party in the state, the fact that he will have to deal with a Democratic legislature and Executive Council could make it difficult for him to implement policy.

“I suspect that we’re going to see some roadblocks” from Democrats, said Jennifer Horn, the former chairwoman of the New Hampshire Republican Party.

Mr. Sununu seemed aware of the challenges he would face.

“The next two years are going to be a little bit different but that’s OK,” Mr. Sununu said during his victory speech.

The vote on Tuesday represented the first stage of elections that will set the parameters for reapportionment after the 2020 census is conducted. About 800 of the lawmakers elected Tuesday will have a voice in that realignment — for the most part, state senators whose terms are longer than two years. Another 5,000 will be elected in 2020.

At the same time, Colorado and Michigan passed initiatives that would give the power of redistricting to some sort of independent commission, joining a number of other states where congressional district lines are drawn under that process.

There are 7,383 state house and Senate seats in the nation, of which 6,069 were in contention on Tuesday, according to the National Conference of State Legislatures.

The Democrats flipped roughly 320 seats on Tuesday night, according to the Democratic Legislative Campaign Committee, but final results were still being tallied Wednesday. In states like Texas, where Democrats gained seats, they increased their power even if they remained in the minority.

“The Democrats had more candidates than they have had in three decades,” Mr. Storey said. “They were as well funded as they have ever been. Probably the biggest challenge for the Dems is the Republicans-controlled redistricting from eight years ago.”

“It was a good election for Democrats — but not a fireworks-light-up-the-sky election,” he said.