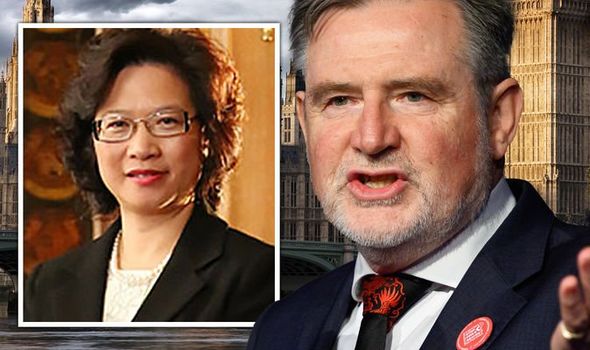 The Speaker of the House of Commons has written to all MPs warning them a solicitor whose firm donated hundreds of thousands of pounds to parliamentarians is feared to have been working for the Chinese Government.

The Security Services have issued an alert and a picture of a Christine Lee who is thought to have been attempting to influence MPs.

She has been a close contact of Barry Gardiner, a member of the shadow cabinet when Jeremy Corbyn was in charge.

The suspected spy paid the wages of two of Mr Gardiner’s aides — one of whom was her son.

There is no suggestion the Labour MP did anything wrong.

In an email to MPs the Speaker said: “I am writing now to draw your attention to the attached Interference Alert issued by the Security Services, MI5, about the activities of an individual, Christine Lee, who has been engaged in political interference activities on behalf of the Chinese Communist Party, engaging with Members here at Parliament and associated political entities, including the former APPG: Chinese in Britain.

“I should highlight the fact that Lee has facilitated financial donations to serving and aspiring parliamentarians on behalf of foreign nationals based in Hong Kong and China.

“This facilitation was done covertly to mask the origins of the payments.

“This is clearly unacceptable behaviour and steps are being taken to ensure it ceases.”

Mr Gardiner said he had been liaising with the security services about Lee for “a number of years”.

He added: “They have always known and been made fully aware by me of her engagement with my office and the donations she made to fund researchers in my office in the past.

“Steps were taken to ensure Christine Lee had no role in the appointment or management of those researchers.

“They are also aware I have not benefitted personally from those donations in any way.

“She ceased funding any workers in my office in June 2020.”

Former Conservative leader Sir Iain Duncan Smith, who has been a vocal critic of the Chinese government, described the developments as of “grave concern”.

He said in the Commons: “Will this now lead to a serious overhaul of the accreditation procedures here in the House of Commons because it’s clearly too slack that these people get in – either in APPGs (all-party parliamentary groups) or with individuals.

“Is it possible we’ll have a statement from the Speaker from the chair about the risks?”

Sir Iain said he has done much to help Hong Kong-Chinese people flee the communist regime, noting: “We have names and numbers of people, and that leaves me worrying that some of these have been accessed by such an individual.

“These will be their lives and families at risk and I am deeply concerned about this because my activities therefore may well have therefore been traced, as those as well from my colleagues and friends.

“I understand that the latest news I hear is that this individual is not to be deported and no further action to be taken.

“How can it be that an agent of a foreign despotic and despicable power that is hellbent on reducing many of those people into penury it seems, how can they put somebody into Parliament – this mother of Parliaments – and then that individual have nothing done to them other than they’re not allowed in Parliament.

“This is surely not good enough.”