At Trump Rallies, Women See a Hero Protecting a Way of Life

COLUMBIA, Mo. — Standing in an airplane hangar in the mid-autumn chill awaiting the arrival of President Trump, Joan Philpott said she was angry and scared. Only Mr. Trump, she said, can solve the problems she worries most about.

Ms. Philpott was one of thousands of women who braved a drizzle for hours to have the chance to cheer Mr. Trump at a rally here on Thursday. While political strategists and public opinion experts agree that Mr. Trump’s greatest electoral weakness is among female voters, here in Columbia and places like it, the president enjoys a herolike status among women who say he is fighting to preserve a way of life threatened by an increasingly liberal Democratic Party.

“He understands why we’re angry,” Ms. Philpott said, “and he wants to fix it.”

As Republican candidates battle to keep their congressional majorities in the midterm elections on Tuesday, Mr. Trump is crisscrossing the country to deliver a closing argument meant to acknowledge — and in many cases stoke — women’s anxieties. At rally after rally, he has said that women “want security,” warning of encroaching immigrants, rising crime and a looming economic downturn if Democrats gain power.

Some of Mr. Trump’s female backers initially supported him only reluctantly or do so now in spite of reservations about his bawdy language and erratic behavior. But they shared in his victory after the bitter and partisan battle over the confirmation of Justice Brett M. Kavanaugh. And many believe the president when he reminds them during each of his hourlong pep rallies that the world they know — largely Christian, conservative and white — is at stake on Tuesday. 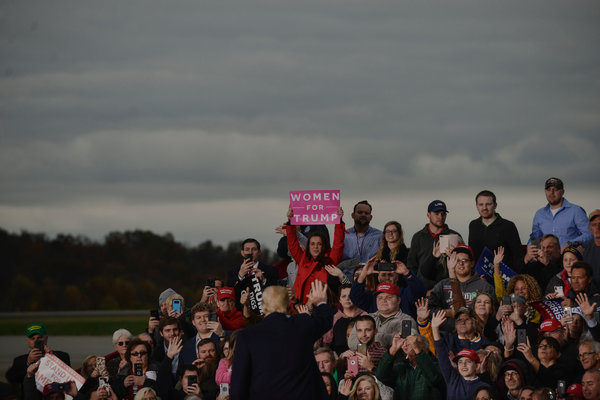 “Honestly, I’m nervous about it,” Amy Kremer, a Tea Party activist and the co-founder of the Women for Trump PAC, said of the election, which is widely viewed as a referendum on Mr. Trump. “I’ve never seen this energy and momentum for a midterm, but also the polls weren’t correct in 2016.”

Ms. Kremer said she and the other women in her Atlanta-area social circle “love” Mr. Trump, adding, “We like when somebody promises to do something and they follow through on it.”

But that warmth toward the president is decidedly a minority view among women around the country, and Republican officials fret privately that Mr. Trump’s harder-edged messages will alienate the women the party needs to preserve vital seats.

Women disproportionately opposed Mr. Trump’s election two years ago, and have turned against him in even greater numbers since, an ominous sign for members of his party.

Anna Greenberg, a managing partner of the Democratic polling firm Greenberg Quinlan Rosner, said that Mr. Trump’s dark view of immigration, articulated in a racist video posted to his Twitter account and several fiery speeches, was likely to repel suburban and educated women.

“I don’t see any reason to believe we aren’t going to have an enormous gender gap, particularly driven by suburban women,” Ms. Greenberg said in an interview.

Yet days before the midterm elections, women are streaming into the president’s campaign events wearing bedazzled hats and T-shirts proclaiming Mr. Trump’s greatness. In between the selections from the musical “Cats,” the Celine Dion ballads and the Elton John classics that fill out the president’s campaign soundtrack, they hoist hot-pink “Women for Trump” signs as they balance babies on their hips. And they scoff at the suggestion that Mr. Trump — who has been accused of sexual assault and boasted graphically that he could do “anything” with women — has a problem with them.

“I get a kick out of it,” said Misty Spencer-Sauer, 40, a stay-at-home mother from Blackwater, Mo., who drove more than an hour to attend the Columbia rally with her father and fiancé. “I just sit and yell at my TV, because they twist around what he says and it’s, like, everybody’s so sensitive all the time. He may be blunt, but I can take it.”

Like Ms. Philpott, many of the women expressed a vague anxiety about an economic downturn if Republicans lose. But it is their visceral fear of immigrants and raw anger about changes in cultural mores — encapsulated by what they called Democrats’ rush to believe uncorroborated allegations of sexual assault by Justice Kavanaugh — that appear to be driving the intensity of their support for the president.

Ms. Bass, who attended Mr. Trump’s rally Friday afternoon in Huntington, W.Va., said she believed the president’s claims that the migrant caravan heading toward the United States from Central America was being funded by American liberals — probably, she said, by George Soros, the Jewish billionaire who has been the target of conspiracy theorists for weeks.

Women like Ms. Bass, who was decked out in Trump memorabilia at the rally, are the people the president has in mind when he boasts about how popular he is with female voters. “They keep saying I’m not doing well with women — they said it before the last election,” Mr. Trump said here on Thursday. “Then, when the election was over, they said: ‘You know what? He did great with women.’”

The president did not, in fact, do great with women. While he often claims that 52 percent of women supported him, that was the proportion of white women who did so; over all, 41 percent of women backed him in the presidential election. Since 2016, women have grown only more skeptical of him. A recent NBC/Wall Street Journal poll found that 38 percent of women approved of the job he was doing, substantially below the 47 percent it recorded over all, and 58 percent of women disapproved.

But Mr. Trump has not tempered his tone, instead betting that his fear-based appeals will resonate with women. “Border security is very much a woman’s issue,” Mr. Trump said on Saturday afternoon in Belgrade, Mont. “Women want security. They don’t want that caravan.”

That is certainly the case for Kristin Sellers, 48, of Pace, Fla., who said she was “anxious as hell” about the migrants, and trusted Mr. Trump to keep them out.

“It doesn’t mean I agree with everything that comes out of his mouth, because like his wife, I’d like to take his phone from him, but I just felt that we needed someone with a business sense to get our country back on track, and that’s what Trump has done,” Ms. Sellers said as she waited for Mr. Trump in an airplane hangar in Pensacola, Fla., on Saturday.

Some of the women who are backing him were not sure two years ago that they wanted him to be president.

Ms. Spencer-Sauer said she “struggled” briefly to decide whether to support Hillary Clinton, reflecting on the history-making milestone her election would set. But when Mr. Trump won the Republican primary, her doubts were erased.

Her love of Mr. Trump has created a rift with her 20-year-old daughter, who bawled on election night in 2016, Ms. Spencer-Sauer said, grinning as she recalled the suck-it-up response she offered: “Well, I don’t know what to tell you, dear, but he won.”

Meifang Wang, 54, a cardiovascular researcher at the University of Missouri, also sparred with her children about her support for Mr. Trump, an argument that they won in 2016, when they persuaded her on Election Day to stay home rather than vote for him.

“I regret it,” she said, calling Mr. Trump “like a father for this country.”

Ms. Wang, who immigrated from China in 1990 and voted for President Barack Obama twice, said Mr. Trump’s harsh tone and policies toward immigrants did not bother her.

“You guys think it’s not very humanitarian, but he’s doing the right thing,” she said. “We work hard and pay our taxes, and they’re living life as freeloaders — I call them freeloaders.”

Ms. Wang was one of many women interviewed over the past week who spoke of Mr. Trump as a paternal, benevolent figure. They smiled and shook their heads as if dismissing the antics of a beloved uncle when asked about Mr. Trump’s callous remarks and erratic behavior.

“I didn’t vote for him for his character,” said Charlene Brown, 57, a real estate agent from Indianapolis who attended the president’s rally there on Friday. “I voted for him for his positions.”

Rachell Marks, 59, who works in car sales in Billings, Mont., said she would continue to support Mr. Trump because she believed he told the truth.

“I have an infatuation and a love for this man that’s not normal,” Ms. Marks said. “I give the highest respect when people are telling the truth and giving their political power. If anything, I have a deeper respect now.”

Of Mr. Trump’s previous visit to Montana, when in the wake of a Saudi journalist’s killing he praised a congressman for body-slamming a reporter, Ms. Marks said with a shrug: “People tend to get on people’s nerves.”