Ms Foster has been in charge of the largest party in the Northern Ireland Assembly for five years. It is thought as many as 75 percent of DUP representatives have called for her resignation.

A number of the party’s MPs in Westminster and peers in the Lords are also understood to have signed the letter.

It is the first time the DUP has faced a leadership challenge, with an emergency meeting of party officials called to set out the terms of a contest.

Amid rumours swirling around her future, Ms Foster shrugged off threats of a leadership challenge earlier today.

“Stories on leadership come up from time to time, and it’s one of those times,” she said. 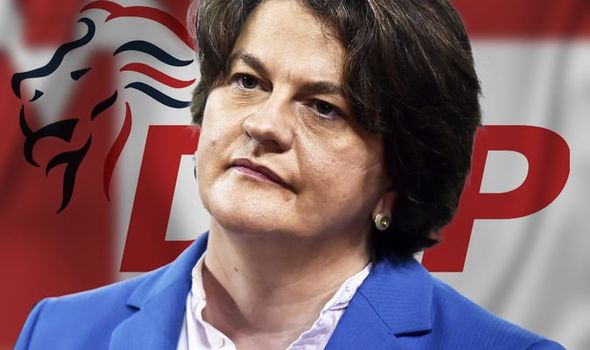 “So we’ll just deal with it and move on because I’ve bigger things to do, including getting us through this Covid pandemic, including listening to the concerns of working-class communities.

“These stories come up from time to time. This is no different.

“I haven’t received any letters from constituency associations so I’m not going to get into a running commentary on these issues, they come up from time to time.

“I think it’s important to note that there is the big job of work to do. We have a year left of this mandate.

“It’s important that we lift our eyes and continue the work of rolling out of the restrictions, deal with the Northern Ireland Protocol.”

Ms Foster’s time at the helm has been turbulent. In 2017 she was caught up in a scandal surrounding Northern Ireland’s Renewable Heat Incentive.

The scheme cost the taxpayer hundreds of millions of pounds with republican party Sinn Fein demanding her resignation.

Her failure to do so led to the collapse of the power-sharing executive, with the Assembly only reinstated last year.

Ms Foster also oversaw the introduction of a confidence and supply agreement to prop up Theresa May’s Government in Westminster after the 2017 election.

The deal led to extra funding for Northern Ireland and gave the party significant influence over Brexit negotiations.

However, the eventual withdrawal agreement trade deal brokered with Boris Johnson as Prime Minister has angered the DUP, with the unionist party accusing the deal of not treating Northern Ireland in the same way as other parts of the UK.