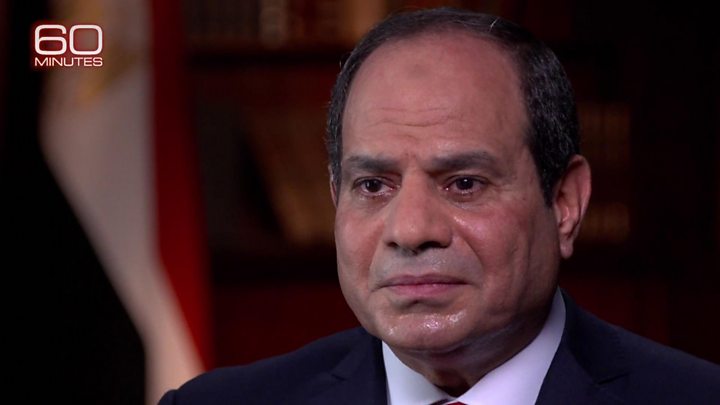 The CBS television network says it has rejected a request by Egypt’s envoy to the US not to broadcast an interview with President Abdul Fattah al-Sisi.

The 60 Minutes programme cited Mr Sisi as confirming the Egyptian military was working with Israel to combat jihadist militants in the Sinai peninsula.

He also denied Egypt was detaining any political prisoners and defended a deadly crackdown on protesters in 2013.

CBS says it was asked not to air the interview soon after it was recorded.

There was no immediate response to the report from the Egyptian government.

What did the president say?

CBS not provide a full transcript of the interview, but it said the retired field marshal was questioned about the crackdown launched after he led the military’s overthrow of the democratically elected President Mohammed Morsi in July 2013.

More than 900 people – most of them supporters of Morsi’s now-banned Islamist movement, the Muslim Brotherhood – were killed as security forces cleared Rabaa al-Adawiya Square and Nahda Square in Cairo on 14 August 2013. Another 120 people died at Ramses Square two days later.

Mr Sisi, who was serving defence minister at the time, was asked by CBS if he had given the order to fire on the protesters in Rabaa al-Adawiya Square. He replied: “There were thousands of armed people in the sit-in for more than 40 days. We tried every peaceful means to disperse them.”

Human Rights Watch has said few people were armed, and that the systematic nature of the killings suggested they were part of a policy to use lethal force, making them probably crimes against humanity.

The president was also asked about reports by human rights activists that as many as 60,000 political opponents have probably been detained since 2013.

“I don’t know where they got that figure. I said there are no political prisoners in Egypt. Whenever there is a minority trying to impose their extremist ideology we have to intervene regardless of their numbers,” Mr Sisi said.

CBS said the president also “confirmed his military was working with Israel against terrorists in North Sinai”, where attacks by an affiliate of the jihadist group Islamic State has left hundreds of security personnel and civilians dead.

Why would Egypt want the interview pulled?

The 60 Minutes team was contacted by the Egyptian ambassador shortly after the interview was recorded and told it could not be aired, according to CBS. But the network refused and plans to broadcast the interview on Sunday night.

CBS did not quote the ambassador, but it did say the questions about the crackdown on dissent “were not the kind of news [Mr Sisi’s] government wanted broadcast”.

Mr Sisi’s reported confirmation of military co-operation with Israel over North Sinai might also be controversial in Egypt. The two countries fought four wars before signing a peace treaty in 1979.

In February, the New York Times reported that the president had approved a covert Israeli air campaign in North Sinai that had resulted in more than 100 strikes by unmarked drones, helicopters and jets.

However, Egypt’s military insisted at the time that only Egyptian security forces were confronting militants in the region and warned local media not to report “unreliable information”.

When asked about Mr Sisi’s interview with CBS on Friday, an Israeli military spokesperson told the BBC: “We do not comment on foreign reports.”