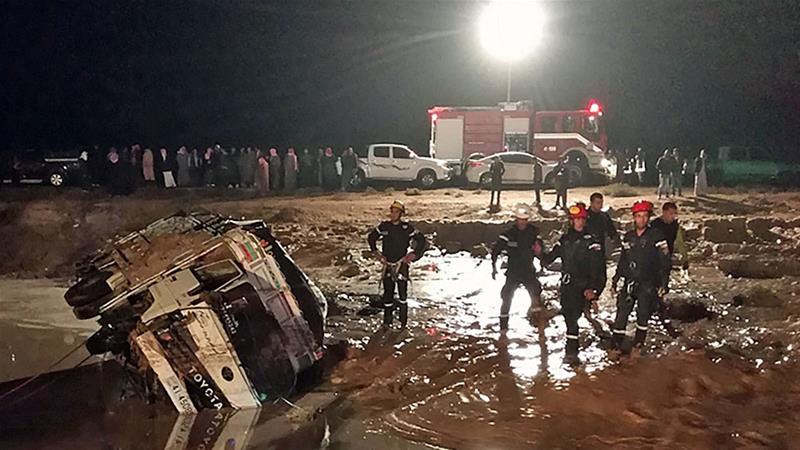 Heavy rains and flooding killed at least 11 people in Jordan and forced authorities to evacuate more than 3,700 tourists from the ancient city of Petra on Friday, officials said.

In an earlier statement, Ghunaimat said two women and a girl were killed in Madaba province when their vehicle was swept away, adding that nine people were admitted to hospital, including some in critical condition.

Torrential rains and flooding began Friday afternoon. In Wadi Musa, the town next to Petra in southern Jordan, water surged from nearby mountains into a dry riverbed running through the community.

Ahmed Shamaseen, 29, owner of the Petra Harmony guest house, told The Associated Press news agency he heard a thunderous sound, ran outside and saw water carrying tree stumps, rocks and debris rushing through the riverbed towards Petra. He said several shops near the Petra visitors’ centre were badly damaged by flooding.

Shamaseen said a couple from the Netherlands and their one-year-old child were touring Petra when the flooding began. He says the couple told him after their return to the guesthouse that they had to climb to higher ground to evade the water.

Authorities declared a state of emergency in the Red Sea port city of Aqaba further south as downpours started in the afternoon.

A major highway that links Amman with the south was also closed. The government announced the closure of universities and schools on Saturday and mosques were opened to shelter civilians in areas hit by the floods.

Two weeks ago, 21 people, mainly children, died after they were swept away in flash floods on a school outing in the Dead Sea region, in one of the country’s worst natural disasters in decades.

Politicians and members of the public criticised the emergency services at the time, saying crews had been unprepared, and two ministers were forced to resign after a parliamentary committee found negligence.