Inside Libyan detention 'hell' where refugee burned himself alive

Desperate detainees say they spend their days in the dark in overcrowded halls, amid an unchecked tuberculosis outbreak. 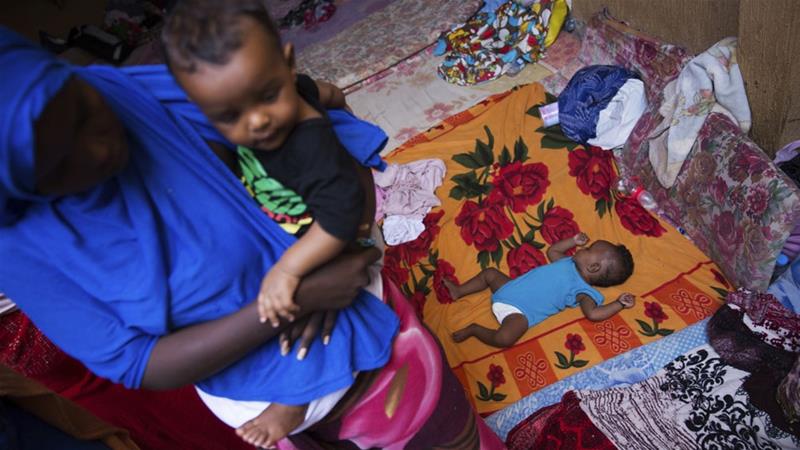 It’s been nearly three weeks since Abdulaziz, a 28-year-old Somali, doused himself in petrol before burning himself to death in Triq al Sikka migrant detention centre in Libyan capital, Tripoli.

Other detainees, who witnessed what happened, said he killed himself shortly after a visit from the United Nations Refugee Agency (UNHCR), claiming officials had told him he had no chance of being evacuated from Libya.

Abdulaziz had been in the detention centre for nine months, and felt completely hopeless, they said.

“First he started in secret, then he was shouting, people were running, then it was already over,” said one detainee about the suicide, adding that others tried to save him, but it was too late.

The UNHCR says the Somali’s death had nothing to do with their visit, and Abdulaziz was scheduled for evacuation to Niger next month, though it’s not clear why he hadn’t been told about it.

In the following days, refugees collected small amounts of money, sent from their families, to buy coffee, biscuits, and candles, and celebrate his life.

However, their thoughts quickly turned to who might die next.

Thousands of refugees and migrants are currently being held in indefinite detention by Libya’s Department for Combatting Illegal Migration (DCIM). Many were deported back to Libya after the boats they were on, en route to Italy, were intercepted by the EU-funded Libyan coastguard.

Among them are people from Somalia, Eritrea, or Sudan; countries at war or dictatorships where gross human rights abuses are taking place.

They say they can’t go home, and should be evacuated to a safe country.

Of the centres in Libya’s capital, Tripoli, Triq al Sikka, which holds more than 400 people, is regularly described by refugees and migrants as one of the worst, because of the levels of neglect and abuse.

“It’s just like hell,” one former detainee said. “An abomination.”

‘Day and night is the same for us’

Al Jazeera has spoken to six current and former detainees in Triq al Sikka. Some say they’ve stayed as long as a year, while others escaped during recent clashes in the city. Calls to DCIM went unanswered.

Detainees described spending every day in the dark, with guards who won’t go near them, for fear of contracting disease. “Day and night is the same for us,” one man said.

In the past few months, the situation has reached a crisis point. For three weeks, detainees say those infected with tuberculosis have been given no medication, after staff from the International Rescue Committee (IRC), which has provided medical care there since early September, became worried they were contracting the disease.

Now, they fear every male has it. One detainee described a man coughing blood beside him. “May God help him. Yesterday they took him to the front door but the guards said there is no doctor. So the number (of sick people) could increase, unless there is a solution. We are living by the power of God.”

“We had been working with the National Centre for Disease Control to document and diagnose cases of TB, and we are trying to do that but the conditions in the centre are just not adequate, that’s the problem.”

He said IRC has diagnosed 25 cases of TB in Sikka, and those who were deemed contagious were removed and isolated, but this process was suspended last week after staff tested positive for TB. They’re aware the disease may now be spreading.

“The problem is not unmanageable, but Libya can’t or won’t handle it, and we need other countries, on a humanitarian basis, to provide help and provide asylum if needed, or at least to work with the Libyan authorities so that we can have more humane treatment of these people.”

The layout of the centre means more than 200 men and older teenage boys are all crammed into one dark hall, with almost 230 women and children in another, more open, area. Sick people are kept with everyone else.

Detainees are mainly Eritreans and Somalis, thought there are also Ethiopians, Sudanese, Yemenis, Syrians and South Sudanese, they say.

Among them are roughly 30 married couples. Husbands and wives can meet and speak for about ten minutes a week, according to detainees. “At that moment, the guards (stand) about one metre from you,” one commented. “You get afraid to touch each other because they don’t love. The police don’t like it.”

Abdulaziz, the Somali man who killed himself, was married, and his wife remains in the centre. There are also children there, including newborn babies.

Others locked up are pining lost loves; one man told Al Jazeera of his girlfriend who died in the Sahara desert on the way to Libya.

Detainees said that, as well as TB, people regularly suffer from fevers, kidney problems, and various other diseases.

Some are disabled from injuries received earlier on the migration route.

“If I spend time more here it means I am waiting to die, because the situation is very bad,” one man said.

Current and former detainees say there have been anywhere between seven to twenty deaths in Triq al Sikka this year.  Al Jazeera was unable to confirm these deaths with any organisation working there.

“When they die, (the guards) just take the body and that’s it,” said one man, adding if migrants didn’t hold their own remembrances or try to inform families, “no one would do anything”.

As evidence of the tight hold on information coming from the centre, phones are strictly forbidden. Three former detainees said they’d never ask guards to contact the family of someone who died, for fear of being brought to a small room and beaten with metals or sticks, or deprived of food.

When foreign visitors come to Sikka, detainees said injured or tortured people are hidden at the back of the hall, put sitting between buses, or locked in the guards’ toilets. Three former detainees said that UN staff always call before they arrive, and guards warn detainees “if you say something negative about us we will torture you”.

A foreign journalist who visited Triq al Sikka last year confirmed he witnessed beatings there, and that it “seemed to be a punishment”.

“Libyan guards do not care about these people at all. That was clear to me across every place I visited. They really did seem to consider these people like animals,” he said.

In late August, heavy fighting broke out in Tripoli, as rival militias vied for control of the capital. During the clashes, a missile fell close to Sikka, and in the chaos some detainees escaped. But others, including those with wives and children, thought it was better to stay where they were rather than risk being on the streets, where they could be killed or kidnapped.

Though a ceasefire was reached, detainees say they still hear occasional fighting. “Everyone has guns and all the time we’re hearing the sounds of guns,” one man said.

During the fighting, medical teams tracking TB cases lost track of some of those infected, according to IRC’s Garofalo. The sounds of warfare also added to the trauma suffered by people who have already been through torture by smugglers, extortion and abuse along the route to Libya and the disappointment of being returned from the Mediterranean after they tried to escape.

Trauma means some detainees have begun to talk to themselves, sleep in the toilet, get angry, or “play with dirty things,” one detainee told Al Jazeera.

“You know prison is very sensitive for the mind. When you stay a long time without anything in prison you have to become crazy or die. This prison is very, very hard for human beings.”

When asked what was the worst thing they saw in Sikka, former detainees were unanimous. They said it was when guards sell detainees to smugglers.

“These Libyans only think of you as an industry,” one said.

Accused of working with smugglers

Human rights groups, including Amnesty International, have previously accused the Libyan authorities of working with smugglers.

Other detainees say they feel their only hope is to return to illegal routes, though figures from September show only one in ten migrants who attempt to cross the Mediterranean from Libya are making it to Europe.

“I don’t have hope to evacuate by UNHCR,” an Eritrean said. “I only know that I will pay money and try again to the sea.”

All detainees Al Jazeera spoke to said they realise that spending all day in cramped quarters, with little nutrition and poor sanitation, may have health implications that could stay with them for life.

One man said he feels his face and body now look ten years older than his actual age, because of all he’s been through.

“This prison gets very dirty inside, there’s no place to walk, so for 24 hours we are sitting,” he said.

“Because of the shortage of food, clean water, no medication and not enough sleeping space, it’s very dirty with a bad smell. We stayed a long time without fresh air, sunlight and no communication with our families and others,” he added.

“I miss outside so much.”