WHO: Coronavirus 'accelerating' in some Latin American countries

Last week, Brazil saw the highest number of new coronavirus cases in a seven-day period since its outbreak began. 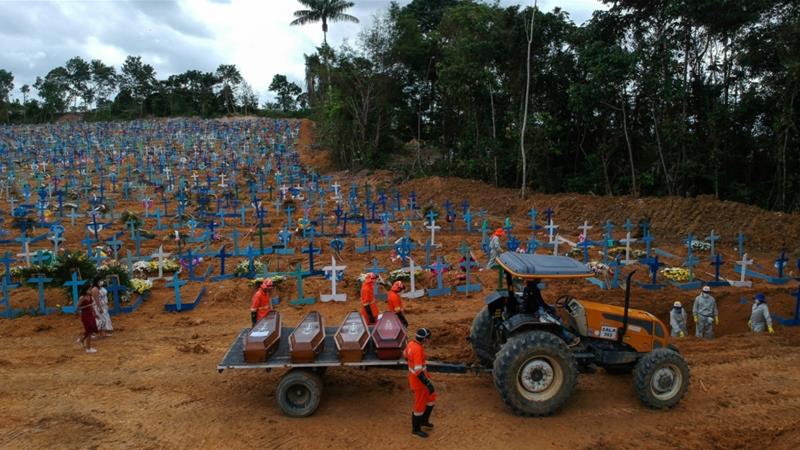 The WHO’s regional Latin American health authority has warned that the new coronavirus is “still accelerating” in Brazil, Peru, Chile, El Salvador, Guatemala and Nicaragua, as the Americas become the new epicentre of the global pandemic.

Carissa Etienne, WHO director for the Americas and head of the Pan American Health Organization, said that Brazil last week reported its highest new number of coronavirus cases for a seven-day period since the outbreak first reached the country of over 209 million.

To date, Brazil has confirmed nearly 375,000 cases, second only to the United States. At least 23,473 people had died from COVID-19, the disease caused by the virus, as of Tuesday, according to a Johns Hopkins University tally. President Jair Bolsonaro has been openly hostile towards coronavirus restrictions.

Brazil’s daily death rate became the world’s highest on Monday and a University of Washington study has warned that the country’s total death toll could climb five-fold to 125,000 by early August.

“Our region has become the epicentre of the COVID-19 pandemic,” Etienne said, as other PAHO directors warned there are “very tough” weeks ahead for the region and Brazil has a long way to go before it sees the pandemic end.

The Americas have registered more than 2.4 million cases of the new coronavirus and more than 143,000 deaths from the resulting COVID-19 respiratory disease. Latin America has passed Europe and the United States in daily infections, she said.

“Both Peru and Chile are also reporting a high incidence, a sign that transmission is still accelerating in these countries,” Etienne said at a virtual weekly briefing on Tuesday.

Etienne’s statements come as some of the hardest-hit countries across the world have begun to ease movement restrictions designed to contain the virus, and resistance towards the measures has grown in Latin America.

Bolsonaro has criticised governors who have imposed coronavirus lockdowns across the country, while protesters in the Chilean capital Santiago took to the streets on May 18 calling for more government support amid a strict lockdown in the city.

Peru last week extended its nationwide lockdown until the end of June.

“Now is not the time for countries to ease restrictions,” Etienne warned.

The WHO on Tuesday also said it expected a safety review of hydroxychloroquine to be completed by mid-June. The malaria drug was being trialled as part of the body’s global “Solidarity” initiative, which is exploring possible COVID-19 treatments.

The trial was paused after studies brought its safety into question, including one published on Friday that suggested the drug may actually increase the chance of death for those suffering from COVID-19.

US President Donald Trump, despite warnings from health officials, has repeatedly touted hydroxychloroquine as a preventive measure against coronavirus, revealing last week that he had taken a course of the drug.

On Monday, Brazil’s health ministry said it would continue to recommend the drug for COVID-19.

“We’re remaining calm, and there will be no change,” health ministry official Mayra Pinheiro told a news conference.