Mexico’s war on drugs: Arrests fail to drive down violence 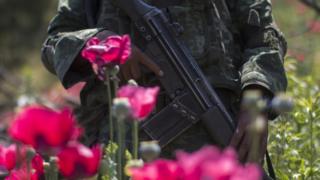 Mexico experienced its most violent year in 2017 with more than 25,000 murders, official figures suggest. It is the highest annual tally since modern records began. Organised crime accounted for nearly three-quarters of those murders.

While Mexican President Enrique Peña Nieto and his predecessor in office, Felipe Calderón, have both waged war against criminal gangs for more than a decade, it has shown little result.

A number of major cartel leaders have been arrested or killed but instead of driving homicide figures down, the crackdown on cartels has led to the fragmentation of existing cartels and the creation of new drug-trafficking gangs.

This timeline summarises the key events involving four major gangs – the Sinaloa, Juárez, Tijuana and Gulf cartels – from the beginning of Mr Calderón’s presidency to the present.

January: Mexico records 240 murders in the first eight days of the year alone.

18 January: The Mexican government says US President Donald Trump’s tweet suggesting that Mexico is the “most dangerous country in the world” is “openly false”. It adds that the “high demand for drugs in the United States” has a role in the violence Mexico experiences.

13 January: Carlos Domínguez Rodríguez is shot in his car, becoming the 131st journalist to be killed in Mexico since 2000.

Rights groups have said that Mexican journalists have been deliberately targeted because of their investigations into the activities of the cartels and other crime groups, as well as the cartels’ links with corrupt authorities and police. They say suspects in the killings are often hired cartel assassins or renegade police officers.

The Committee to Protect Journalists (CPJ) says Mexico is “the most dangerous country in the Western hemisphere for journalists”.

19 January: Joaquín “El Chapo” Guzmán, the head of the most powerful drug-trafficking group, the Sinaloa Cartel, is extradited to the United States.

This is “really when the drug kingpin begins to lose his true power… when the fight to see who will be the successor of ‘El Chapo’ Guzmán starts”, the news website Debate reports.

17 August: Guzmán’s two sons are kidnapped by a group which has become the Sinaloa cartel’s biggest rival, the Jalisco New Generation Cartel (CJNG).

Members of the CJNG used to be allied with the Sinaloa cartel, functioning as its armed wing. Since it split from its former ally, the CJNG has become one of Mexico’s most powerful and violent criminal organisations.

See also: Mexico’s most-wanted: A guide to the drug cartels

27 July: The National Mayors Association and Mexican Local Authorities Association report that 78 mayors have been killed since the war on drugs began in 2006. Most of them were executed by drug cartels.

8 January:Guzmán, having escaped from Altiplano federal penitentiary in July 2015, is recaptured and returned to the same prison.

4 March: The leader of Los Zetas, Omar Treviño Morales, also known as Z-42, is arrested by federal forces. The group is known for its violent tactics, such as beheadings.

Treviño is said to have led the group since the capture of his brother Miguel Angel Treviño Morales, better known as Z-40, in 2013.

9 March:Knights Templar leader Nazario Moreno is killed in a shootout with the military.

1 December: Enrique Peña Nieto becomes president and says he will focus on reducing high-impact crimes, such as homicide, kidnapping, and extortion instead of targeting cartel leaders.

20 September: Members of La Familia Michoacana split off from the cartel and found a new group called The Knights Templar.

12 September: The number two of the Beltran Leyva Cartel, Sergio Villarreal Barragán, aka El Grande (The Big One), is detained.

January: Los Zetas, armed wing of the Gulf Cartel, breaks away from the organisation.

The Jalisco New Generation Cartel (CJNG) also splinters from the Sinaloa Cartel. Nemesio Oseguera Ramos, “El Mencho”, is considered to be its leader.

21 January: Alfredo Beltrán Leyva, one of the founders of the Beltrán Leyva Cartel, which split from the Sinaloa Cartel, is arrested.

19 January: Gulf Cartel leader Osiel Cárdenas is extradited to the US.

11 December: President Calderón’s first operation against drug-related violence takes place in Michoacán state, where drug production and trafficking had expanded at an accelerated rate since the 1980s.