‘Living corpses’: Why Colombia’s national tree is at risk 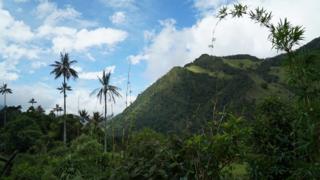 The ceroxylon quindiuense, a distinct species of palm tree which was declared the country’s national tree in 1985, is on the verge of extinction and most Colombians are not even aware of the problem.

That is because it takes decades for the palms to show signs of decay, even when they have already reached the end of their lifespan and scientifically they are dead, explains Mr Bernal.

He is one of the scientists who has been studying the trees over the past two decades and he is more than a little worried.

Thousands of tourists travel to the Cocora Valley in Colombia’s coffee region every year to marvel at the towering palms. But even in this area famous for its wax palms, the trees are few and far between.

“The trees live for up to 200 years and because of their long lifespan, their decay will only be seen by younger generations,” Mr Bernal told the BBC.

“This is why so many Colombians do not realise our national tree is dying out.”

Since 1989 the number of trees in the region has declined by 78% and there are now only about 2,000 palms left in the Cocora Valley, a group of scientists which has been monitoring the population says.

The wax palms are not only a tourist attraction but a key component in the region’s ecosystem. The fruits produced by the trees feed a large number of insects, birds and mammals.

But according to Mr Bernal, the palms in the Cocora Valley are at risk. Much of the valley’s once lush dense forest has been cut down to make way for cattle grazing.

This poses problems for the seeds of the wax palm. They either get burned in the sun or they get eaten by the cows.

Although the living trees are relatively healthy, when they start to decay naturally there are no young saplings to take their place.

The Quindío Wax Palm grows in very few areas in Colombia. Apart from the Cocora Valley they can be found in Tochecito, an area in Valle del Cauca province.

The little-known Tochecito is thought to hold the largest number of trees – an estimated 70% of the national total.

But the fact that parts of the area were occupied by the now largely disbanded Farc guerrilla group means that research there was almost impossible. Scientists hope the number of trees may actually be bigger.

Mr Bernal and his fellow scientists have turned their attention to Tochecito in the hope that they can preserve its wax palms before it is too late.

With the area now safer and more accessible following the 2016 peace deal with the Farc rebels, farmers are moving back and the scientists fear for the future of the national tree.

“We predict we could see half the wax palm population disappear in as little as 50 years’ time,” says Luis Santiago Castillo Martínez of the Humboldt Institute, an environmental research organisation.

“Tochecito is our best opportunity to protect the palms,” he says of the 42 sq km (16 sq mile) area.

The palm trees are legally protected under a law passed in 1985 which prevents their branches being cut off for use during religious celebrations such as Palm Sunday but there are few repercussions for those who completely fell the trees.

Tochecito currently belongs to 40 private landowners and Mr Bernal along with the Humboldt Institute has been asking the Colombian government to declare the area a national park, but so far with little success.

“The most we could achieve was to encourage the owners to declare their farms private reserves,” says Mr Bernal.

Unfortunately there is a loophole to that status, he adds.

“This just means your land is a protected area but it’s an empty status as you can use your land however you see fit. If these landowners decide they want to clear their land, they can.”

Mr Bernal and his fellow scientists have for years been urging the government to buy up the land – a move they estimate would cost $10m (£7.7m) – but so far no action has been taken.

“It’s not a huge amount. It’s cents for a nation like Colombia. The government has the authority to buy this land, and protect the trees, but refuses to do so. It is incredibly frustrating,” he says.

The BBC approached Colombia’s environment ministry ministry and the government body which oversees the management of Colombia’s national parks for comment but did not receive an answer.

Colombia’s 58 national parks are managed by the National Parks Systems and while the number of those designated as protected in Colombia has been growing, the budget has been cut, leaving it struggling for resources.

Mr Castillo says money is key: “The first step to protecting the palms will be to allocate the proper amount to the environmental sector.”

Mr Bernal and his fellow scientists have developed a management plan to save the species but the budget cuts mean their strategy is unlikely to be enacted.

“I’m so disappointed,” Mr Bernal says. “This tree is beloved by Colombian people, everyone knows it is our national tree, But nobody knows we are about to lose it.”