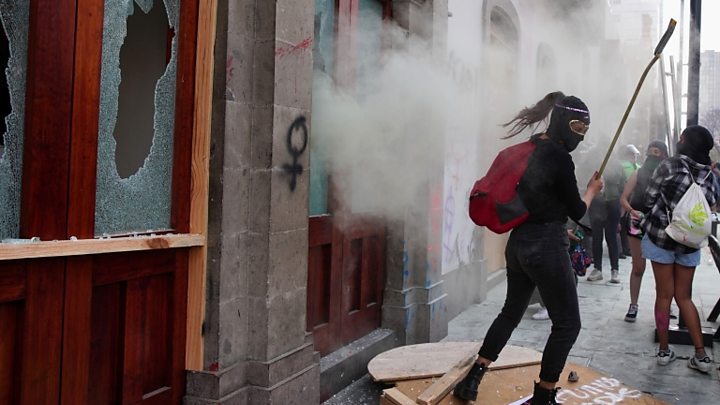 About 80,000 people took to the streets to highlight the country’s rising levels of violence against women.

The rally began peacefully, but police say some groups threw petrol bombs and officers responded with tear gas. More than 60 people were injured.

Tensions are high ahead of a strike in Mexico on Monday when women will strike in protest at gender-based violence.

An estimated 10 women are killed each day in the country and police are investigating more than 700 cases of “femicide”, the killing of women.

Last month, hundreds of women protested against the murder of 25-year-old Ingrid Escamilla, who was allegedly stabbed and mutilated by her partner.

What happened at the march?

Participants shouted “Alive they took them, Alive we want them” and wrote Ingrid Escamilla’s name on the walls of buildings.

“I came here to represent and march for my friends who are no longer here,” one woman told EFE news agency.

But some groups of people wearing masks threw petrol bombs and set fire to parts of the route, including a door to Mexico’s National Place and the president’s residence, city officials said.

Seven people were arrested for attacking a group of protestors. Most of those hurt suffered minor injuries, they said.

Thirteen people were taken to hospital.

Why are protestors angry?

The problem of violence against women in Mexico is getting worse and the government is being accused of inaction.

In one case in 2016, a 20-year-old student was murdered after a family birthday party and her body was found close to the workplace of the man she was last seen with.

Within a day, three men who had been with her in her final moments were released without charge and key evidence was lost.

There has been decades of indifference and widespread impunity in Mexico over such killings, says Maria de la Luz Estrada, President of the National Citizens’ Observatory on Femicide.

President López Obrador was criticised in February for suggesting that media were “manipulating” the problem. He later said his government was attentive to the issue.

Millions of women will take part in a one-day strike on Monday called “A Day Without Us” to call for more action and show how public life looks without them.

Women and men across the world staged marches on Sunday to mark International Women’s Day. 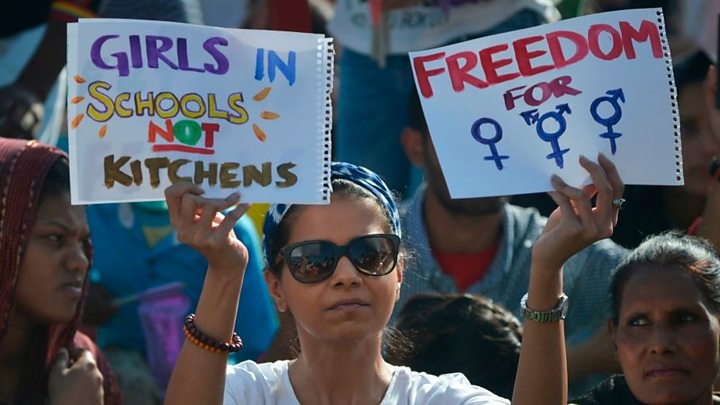 Events have taken place for more than a century and grew out of a trade union movement that demanded political and economic rights for women.

In the UK and the US women marched to campaign to close the gender pay gap and celebrated the Me Too movement.

Marches in several countries were marred by clashes. In Pakistan, Islamists threw stones and shoes at demonstrators.

In Kyrgyzstan protesters were attacked by masked men who tore up their banners, and in Istanbul Turkish police fired tear gas at a group of women.