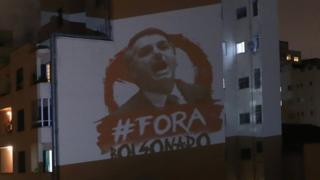 Brazilian President Jair Bolsonaro has accused the media of “fear-mongering” in a speech that downplayed the threat of coronavirus to the country.

In a televised address on Tuesday, he called on mayors and governors to roll back restrictions they have introduced to curb the spread of Covid-19.

“Our lives have to go on. Jobs must be kept… We must, yes, get back to normal,” Mr Bolsonaro said, in a speech that sparked protests across the country.

The president described restrictions on public transport, social-distancing measures, and closures of businesses and schools as “scorched-earth” policies.

He added that people aged over 60 were at risk, but that most people – including himself – had nothing to fear.

“With my history as an athlete, if I were infected with the virus I would have no reason to worry. I would feel nothing, or it would be at most just a little flu.”

Concerns have been raised about whether Mr Bolsonaro may possibly have already have had Covid-19. Over the last couple of weeks, 22 officials who joined him on a recent trip to the United States have tested positive.

Mr Bolsonaro has twice said that his test came back negative, but he has refused to provide proof.

“We consider grave the position expressed by the president today, on national networks, of attacking Covid-19 containment measures,” he added.

“The position runs against the actions adopted by other countries and suggested by the World Health Organization”.

Mr Alcolumbre himself has the coronavirus and is in isolation at home.

Mr Bolsonaro has also been criticised for coming out of reported self-isolation to mingle with thousands of supporters marching in protest at Brazil’s Congress and judiciary, despite the health ministry warning against attending large gatherings.