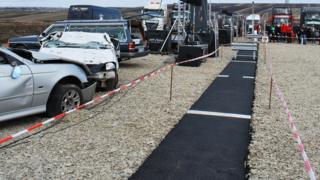 An entrepreneur has built a one-metre-long stretch of motorway in north-eastern Romania to protest about his country’s poor highway infrastructure.

Fed up with the sparse motorway network in his home region of Moldavia, Stefan Mandachi, a 33-year-old who owns a chain of fast-food restaurants, privately commissioned the tiny motorway at a personal cost of £3,800 (€4,400; $5,000).

The campaign lasted for weeks with the aim of causing a stir, and it came to a climax on Friday.

Romania has one of the shortest motorway networks in the European Union, with just 806km (500 miles) throughout the whole country. This despite having a land mass almost equal to that of the UK.

Sitting in the hotel he owns, just a few kilometres from the new road, Mr Mandachi explained his thinking.

“We want to unify the population, we have an ideal – to have motorways,” he told the BBC.

His motorway, situated on a plot of land he owns next to a busy main road, was symbolically built in Suceava, a city in a part of the country that has no stretches of motorway at all.

Lengths of motorway in Europe

Traffic on the adjacent road was almost gridlocked as several hundred supporters turned out for the so-called motorway inauguration.

A media scrum was on hand, along with ambulances and fire engines, while a small plane flew overhead with a banner demanding motorways.

“I feel that we are united,” shouted Mr Mandachi above a din of honking horns. “I’ve never lived through a moment of such solidarity amongst all Romanians.”

Crowds whooped and cheered as he cut the ribbon to open what people have come to call a “motorway monument”.

How mini-motorway struck a chord nationally

The entrepreneur ran an aggressive campaign called “Romania wants Motorways” and asked fellow citizens to protest with him by stopping work for 15 minutes on Friday as he opened his stretch of road.

The campaign has led to serious discussions across the country.

“Politicians come to power and say they’ll build 1,000km of motorways in five years. It’s not possible even with the best technical capacity from everybody involved,” he adds, suggesting that Mr Mandachi might need to wait as long as 25 years to see a “decent” motorway network in his home region.

According to Mr Ciurea, poor roads cost Romania’s economy billions every year. “We estimate that around 2% of Romania’s GDP is lost on road access,” he says. “That’s huge.”

Across the country, mayors, companies, and even footballers joined in Stefan Mandachi’s “Romania wants Roads” protest.

Danish furniture maker JYSK, which has 73 stores in Romania, closed its doors to customers at the allotted time.

“When all regions of the country are connected by motorways, our customers will get their products faster, with lower delivery costs,” said the firm’s country manager Alex Bratu.

Meanwhile, many projects over the years have been plagued by corruption scandals.

In 2016, a new motorway in southern Transylvania quickly earned the nickname the “highway of shame”. It was inaugurated twice because it need repair work almost immediately, and was then demolished a year later after a spate of safety concerns.

‘Patience has reached a limit’

Romania also has the EU’s highest rate of road deaths.

In 2017, Romania recorded 98 deaths per million inhabitants due to road accidents, double the EU average and more than three times that of the UK.

“More people die each year than those who died in the 1989 revolution,” says Mr Mandachi, who arranged a car crash scene next to his motorway, with an ambulance and a funeral car, highlighting Romania’s deadly roads.

Razvan Cuc, Romania’s minister of transport, has declared the Mandachi road illegal due to a lack of permits, but told local media that he understood Mr Mandachi’s concerns.

“Patience has reached a limit,” he said.

Mr Cuc’s understanding, however, has done little to placate the motorway entrepreneur.

“It’s not enough that he understands our frustration, he has to act, because we all know the problem – we need motorways,” says Mr Mandachi.

Shortly before the one-metre motorway was inaugurated, Romania’s ruling Social Democrat-led government announced that the transport minister had travelled to the nearby city of Bacau where work would begin on a Moldavian motorway.

Stefan Mandachi remains sceptical. “I don’t see anything, I don’t see a construction site,” he says.