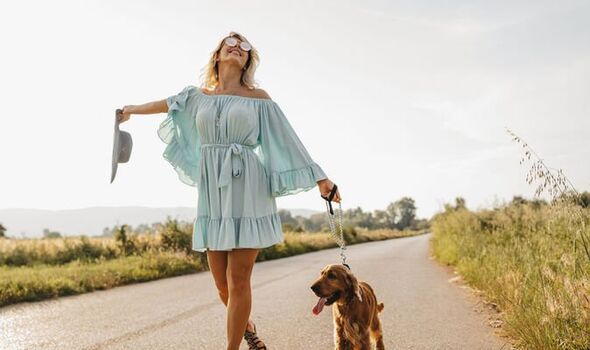 The woman said she had not bothered to change out of her pyjamas, which consisted of a “baggy shirt and PJ pants” combo with a jacket on top, when she popped to the park next to her apartment to walk her dog. She was later horrified when she received some unwelcome feedback, which she shared on Reddit.

The dog walker explained how she often bumps into her neighbour’s girlfriend early in the morning, but on this ocassion she “scowled” at her before heading back inside.

Unfortunately, this was not the end of the matter, reports The Mirror.

The poster wrote: “Well, this morning after I had done my usual routine with my pups, I got two texts from my landlord.

“It was a mass text stating that ‘Summer is coming, please dress in an appropriate fashion in the common areas’ and another just towards me claiming that someone reported me for ‘indecent exposure in the dog park’ and she wants to meet with me asap to get my side of the story.”

The perplexed poster is now wondering whether her outfit had indeed been inappropriate, having previously felt that it had been fine for a quick 10-minute nip to the park.

Fellow Reddit users have rushed to her defence, slamming the neighbour’s girlfriend for being so rude and interfering.

One person said: “You wore a shirt and pants. If this is acceptable for a man, it’s acceptable for a woman. And moreover, why the hell does it matter if you’re wearing a bra? It’s just a man-made boob prison that women are socially pressured to wear.

“The choice to wear a bra is between you and your boobs. Anyone who makes it theirs is a sad person in need of a life.”

But Louise said: “Anybody who thinks pyjama are a ‘perfectly fine’ outfit to leave the house in can’t really say anything!”

Another remarked that the whole debacle reeked of double standards, commenting: “That’s ridiculous. If you were small-breasted no one would’ve said anything. They don’t get to impose additional rules on you just because you have large breasts.”

Margaret MC wrote: “Sounds like the neighbours girlfriend is jealous/concerned her boyfriend will look at her… Just wait till she sunbathes in the garden.”

Vicky Pitt added on Facebook: “Not sure the landlord gets a say in what clothes you choose to wear just because you rent a property from them for one and second if she doesn’t want to wear a bra that is her choice and there are many reasons why someone might not.

“If they are wearing a see through top or something then yes it’s inappropriate I guess and personally I wouldn’t walk my dogs In my pjs but again that’s just my choice.”

And Paul Moore wrote: “I’d be more concerned with why he’s staring at her chest in the first place.”