Where Ukrainians Are Preparing for All-Out War With Russia

KALANCHAK, Ukraine — A makeshift dam of sand and clay, covered with patches of grass, blocks one of Europe’s great canals. Beyond it, swans drift in the trickle of water that remains. A duck slides into a wall of reeds below the bare, concrete banks.

This quiet spot just north of Crimea may not look like much. But some Ukrainians fear it could be the thing that ignites an all-out war with Russia.

“Putin could send his troops in here at any moment,” said Olha Lomonosova, 38, explaining why she had packed a getaway suitcase this year at her home upstream. “He needs water.”

President Vladimir V. Putin of Russia ordered some of the troops he had massed on Ukraine’s border this spring to pull back last month, but as many as 80,000 remain within striking distance, and many Ukrainians believe that the threat of a new invasion remains. A prime reason is the 250-mile-long Northern Crimean Canal linking Crimea with Ukraine’s Dnieper River: the main source of water for Crimea until Mr. Putin annexed it in 2014 and Ukraine, in a secret operation, hastily built the dam to block the canal’s flow.

Now, the fertile plain through which the canal runs in southern Ukraine’s Kherson Region has emerged as one of Europe’s main geopolitical flash points. The tensions over the canal spiked in recent months after a drought worsened Crimea’s water crisis, the risk of escalation rising along with the temperature of Mr. Putin’s showdown with the West. 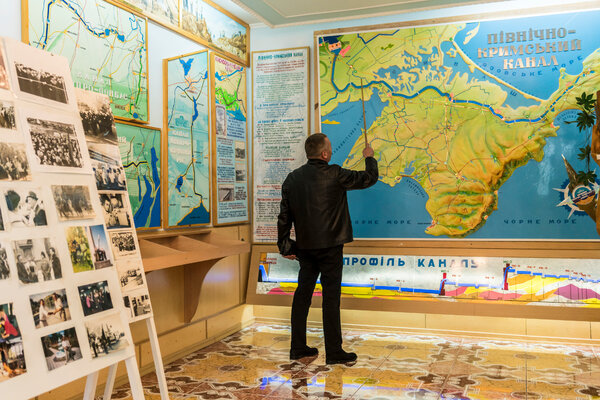 High-powered television transmitters have gone up just over the border in Crimea, beaming the Kremlin’s narrative into Ukrainian-controlled territory. At the canal’s source, huge Soviet-era letters announce “Northern Crimean Canal” in Russian, but they are now painted blue and yellow, the colors of the Ukrainian flag.

The canal is a concrete symbol of the ties that once bound Russia and Ukraine — and of Ukraine’s fundamental challenge of extricating itself from its Soviet past. Water continues to flow through the canal for 57 miles inside Ukraine before the dam cuts off the flow to Crimea, irrigating a land of melon fields and peach orchards where Russian is widely spoken even as a Ukrainian identity is being formed.

A shared Soviet past with Russia still evokes nostalgia among some older Ukrainians, and the Kremlin’s propaganda effort has not let up in the hope that pro-Russian attitudes will one day undo Kyiv’s pivot toward the West. But that nostalgia — along with lingering skepticism of the West’s motives and of the government in Kyiv — is not enough to allay the fears of many over a new war with Russia. 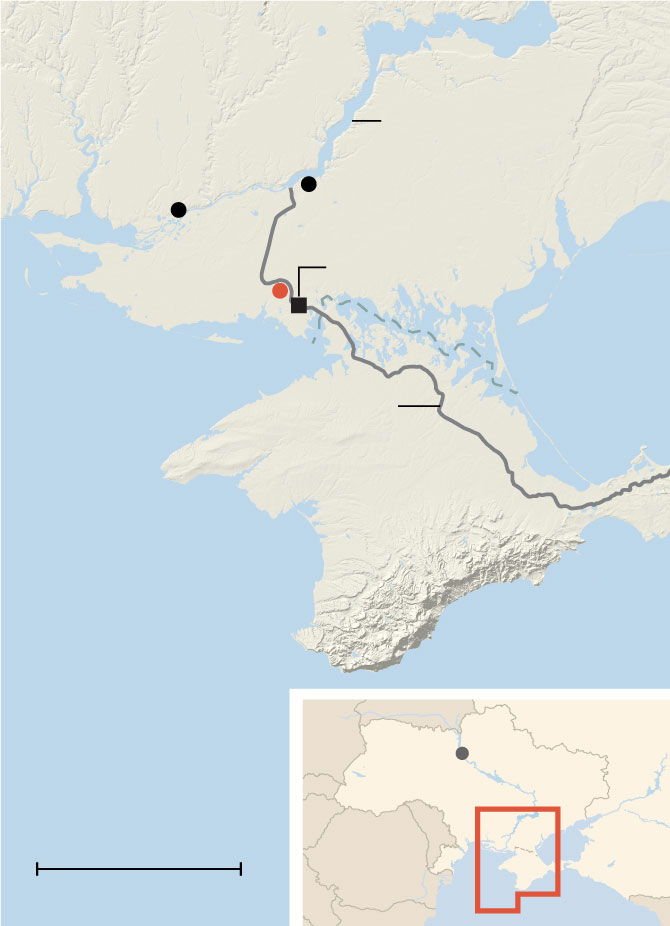 “There’s normal people over there,” Serhiy Pashchenko, 62, trimming pink-flowering peach trees, said of Russia, recalling that he was working on a construction project in Moscow when the conflict broke out in 2014. “But there’s a government over there that does not recognize us as a people.”

In Crimea, after a major drought last year, the water shortage has become so dire that Russian officials have started to evoke the specter of mass death — though warnings of humanitarian catastrophe are contradicted by Russian officials’ assurances that even tourists to Crimea will not go thirsty.

Blocking the canal, a senior official in the de facto Russian government controlling Crimea said in February, represented “an attempt to destroy us as a people, an attempt at mass murder and genocide.” Moscow has pledged to spend $670 million to address the water shortage, but this year reservoirs have been running dry and water is being rationed.

Ukrainian officials are unmoved. Under the Geneva Convention, they say, it is Russia’s responsibility as an occupying power to provide water, and they add that sufficient underground aquifers exist to provide for the population. The Kremlin says that Crimea willfully joined Russia in 2014, aided by Russian troops, after the pro-Western revolution in Kyiv; nearly every government in the world still considers Crimea to be part of Ukraine.

“No water for Crimea until de-occupation,” said Anton Korynevych, the representative for Crimea of President Volodymyr Zelensky of Ukraine, spelling out government policy. “Period.”

Mr. Zelensky checked Ukrainian troops’ readiness in a visit to the trenches at the Crimean border last month. Even though Russian troops are withdrawing, he warned, Ukraine must be prepared for them to return at “any moment.” In Washington, senior American officials believe that an incursion to secure the water supply remains a real threat, though the costs and difficulty of such a move appear to have been sufficient to dissuade Russia for now.

About 10,000 young people from across the Soviet Union helped build the canal, a marvel of engineering that drops about an inch in elevation every mile for the first 129 miles so that gravity keeps the water flowing. Sappers and archaeologists led the way, said the canal’s resident historian, Volodymyr Sklyarov; they cleared World War II ordnance and the occasional trove of ancient Scythian treasure.

The canal even has its own anthem, still framed on the wall of the canal’s headquarters. “We built the canal in peace, along with the whole great and powerful country,” the words go. “Keep it, as dear as your breath, for your children and grandchildren!”

But when Russia seized Crimea in 2014, a senior aide in the Ukrainian president’s office, Andriy Senchenko, organized the damming of the canal as a way to strike back. Before the canal’s annual springtime opening, he directed workers to pile up a pyramid of bags of sand and clay near the border with Crimea. And he had them put up a sign saying they were installing a flow-measurement mechanism, to put Russian intelligence on the wrong track.

He is convinced that blocking the canal was the right decision because it imposed costs on Moscow, much as military resistance would have.

“In order to cause as much damage to the Russian Federation as was caused by seven years of blocking the canal, tens of thousands would need to have died at the front,” Mr. Senchenko said.

The temporary dam is still what holds back the water about 10 miles upstream from the Crimean border. Ukraine is building a more permanent dam right at the border with hatches that could allow the water flow to be restored if the government decided to do so, said the canal’s head, Serhiy Shevchenko. But those hatches are not yet operational, making it physically impossible for now to resume water delivery to Crimea, Mr. Shevchenko said.

The canal is a divisive issue on the ground, where some residents are influenced by what they see on Russian television.

Natalia Lada, a 58-year-old cafeteria director in the Black Sea beachside town of Khorly near Crimea, says she watches Russian television, even though it is “only propaganda against us,” because she finds it most convenient to receive. She says she has learned that Russia seems “ready for war, ready to conquer us,” perhaps just to win control of the nearby canal.

“If the question becomes, ‘It’s either water or peace,’ then peace is of course better,” Ms. Lada said. “Let’s give them water — why do we need war?”

Ukrainian officials say the reach of Russian television, particularly in the country’s border regions, is a security risk that has gone insufficiently addressed in seven years of war.

They say Russia has been erecting ever more powerful television transmitters in Crimea and separatist-controlled eastern Ukraine that direct signals into government-controlled Ukraine. Kyiv has been trying to counter that by erecting its own new transmitters, but the Russian signals are more powerful, officials acknowledge — a losing game of Whac-a-Mole on the airwaves.

“Filling all these holes is very hard, because their resources are greater,” said Serhiy Movchan, an official overseeing radio and television broadcasting in the regional capital of Kherson.

To hear Russian officials tell it, Ukraine’s leaders since 2014 have forced Russian speakers in the country to “renounce their identity or to face violence or death.” The reality is different in Kherson, where many residents still value some common bonds with Russia, including language — but want no part of a further military intervention by Mr. Putin.

A hill outside the city of Kakhovka, near the canal’s beginning, bears another reminder of historical ties to Russia: a towering Soviet monument of Communist revolutionaries with a horse-drawn machine gun, marking the fierce battles here in the Russian Civil War a century ago. Kyiv in 2019 demanded that the monument be taken down, calling it “insult to the memory of the millions of victims of the Communist totalitarian regime.” The city refused, and the monument still stands, overlooking rusty, dismantled lampposts.

Tending her mother’s grave at an adjoining cemetery, Ms. Lomonosova, a gardener, and her father, Mikhail Lomonosov, 64, said they did not want the monument torn down.

They spoke Russian, described themselves as “little Russians,” and said they occasionally watched Russian television. But if Russian troops were to invade, Ms. Lomonosova was ready to flee, and Mr. Lomonosov was ready to fight against them.

“We may have a Russian last name, but we are proud to be Ukrainian,” Ms. Lomonosova said. “Everyone has their own territory, though all have a shared past.”