What does DNA stand for, where is it found and who discovered it? 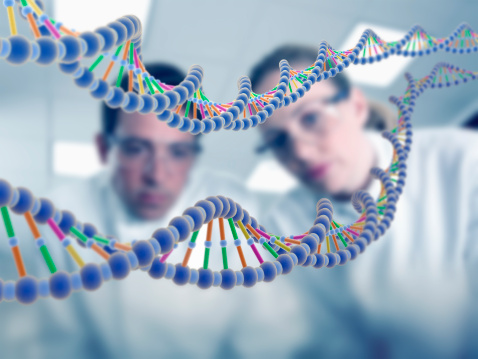 Every single living thing we know of is made up of DNA.

From that houseplant you’re desperately trying to keep alive to your nearest and dearest – every single one of you contains DNA.

Simply put, DNA is a long molecule containing the information organisms need to both develop and reproduce.

It can replicate itself and contains more data than some of the world’s most powerful supercomputers to make you, well, you.

But what exactly does DNA stand for, where can you find it, and who discovered it?

Here’s what we know.

What does DNA stand for?

We know it as DNA, but it actually stands for Deoxyribonucleic acid.

According to Mediline, it is the hereditary material in humans and almost all other organisms.

Nearly every cell in a person’s body has the same DNA.

DNA is a polymer composed of two polynucleotide chains that coil around each other to form a double helix – the twisting image we’re used to seeing when we think of DNA.

Why is it so important? Well, it carries genetic instructions for the development, functioning, growth, and reproduction of all known organisms and many viruses.

So, basically, everything about you and other living species stems from DNA.

Where is it found?

Most DNA in your body, and other living organisms, is found in the nucleus of a cell, known as nuclear DNA.

A small amount of DNA can also be found in the mitochondria, which is called mitochondrial DNA.

The information in DNA is stored in a sort of code made up of four bases:

Human DNA contains around 3 billion of these bases, the order of which determines the information needed to build an organism.

Basically, this code determines whether you exist as a human, a frog, a bird, or a banana.

DNA bases pair up – A with T and C with G – to form units called base pairs which, along with sugar and phosphate – make up nucleotides, or the ladder structure within the double helix.

You may think that American biologist James Watson and English physicist Francis Crick discovered DNA in the 1950s.

However, this is not true.

DNA was actually first discovered in the 1860s by Swiss chemist Friedrich Miescher.

The scientist was originally trying to study the composition of lymphoid cells, otherwise known as white blood cells.

Instead, by chance, he isolated a new molecule he called nuclein from a cell nucleus.

In 1881, Nobel Prize winner and German biochemist Albrecht Kossel identified nuclein as a nucleic acid and gave DNA its name.