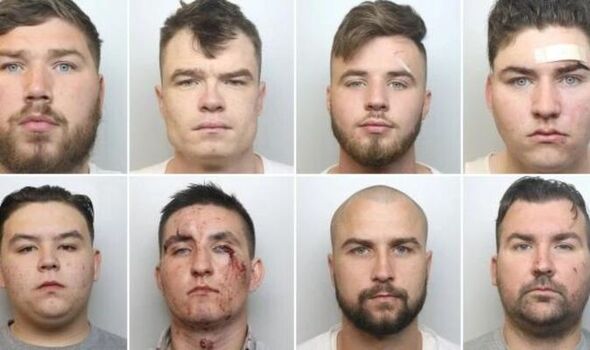 The wedding reception on June 26 at the Daresbury Park Hotel in Warrington, Cheshire, involved 50 people and caused “extensive damage”. The fight which saw chairs, tables, coat stands, and glasses thrown across the room and fire extinguishers used to attack people was observed by children.

Chester Crown Court heard the details of the event from a barman who was helping with the catering for the 150 wedding guests.

When he returned 15 minutes later from the main bar, the fight had developed into a mass brawl.

CCTV footage was shown to the court which featured glassware and chairs being thrown while a sweet cart was toppled, and displays were ripped down.

Despite local police being called to the scene, they retreated and called for backup after seeing the “mayhem” and feeling unable to deal with it alone.

To bring the situation under control, 30 police cars filled with dozens of police officers and a patrol of armed backup officers had to attend the scene.

Mugshots of those arrested showed one man with a bloody face and following the incident, Warrington Hospital declared a major incident though only three people went to hospital with minor injuries.

Judge Simon Berkson condemned the brawl saying it would have been “truly shocking” for the other guests.

He added: “The events of that day were truly shocking to anyone who saw them…For those present and innocent, one can only imagine the fear.

“What should have been a happy occasion, a wedding, turned into a bloodbath.

“The suite was set up for a celebration, with a DJ playing music, people dancing and enjoying themselves. This came to an end when violence broke out.”

The “extensive” damage caused by the fight saw the Stokes family pay over £16,000 to the hotel.

Alongside this, £300 of alcohol was stolen, the wedding planner’s belongings worth £2,400 were wrecked while glass was also stolen to use as a weapon.

Four defendants from the Stokes family were sentenced at Chester Crown Court on Monday November 14 while a further five were handed sentences on Wednesday.

Edward William Stokes, 28, was sentenced to 27 months in prison, Terry Stokes, 36, got 21 months, 40-year-old Thomas Stokes was sentenced to jail for 25 months, and Edward Stokes, 50, received a 16-week sentence suspended for 18 months with 100 hours of unpaid work.

She said: “The level of violence involved meant the officers who first attended to the hotel were unable to access the function room to bring the other guests who were understandably shaken by what was happening, to safety due to having items thrown directly at them.

“The full extent of what happened was captured on CCTV footage from inside the hotel enabling us to see the scale of the violence from start to finish and showed how much these men were intent on causing harm to each other as well as to others.”