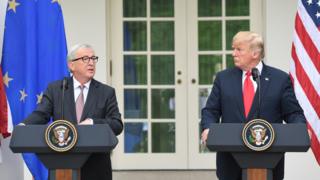 The EU says the US government has changed the bloc’s diplomatic status in Washington, in practice downgrading it.

The Trump administration did not notify the EU about the change. The EU has asked the US to explain the move, EU spokeswoman Maja Kocijancic says.

Previously it has been US practice to treat the EU delegation and ambassador “as a country would be”, an EU source told the BBC.

The US ranks the diplomatic status of international organisations lower.

The EU source, who declined to be named, said the US had changed the way the diplomatic list was implemented, but not the list itself, which describes the EU as an international organisation.

The US state department’s order of precedence says the head of an international organisation “should be considered equivalent to a chief of state or head of government, but should be listed in precedence order, after all official representatives of the sovereign nations present”.

The change comes amid heightened trade tensions, with the EU anxious to dissuade President Donald Trump from slapping a 20% tariff on all imported EU cars. Last year the US and EU imposed tit-for-tat tariffs on a range of goods.

Ms Kocijancic said: “We understand that there was a recent change in the way the diplomatic precedence list is implemented by the United States’ Protocol.

“We are discussing with the relevant services in the [US] administration possible implications for the EU delegation in Washington. We were not notified of any change. We expect the diplomatic practice established some years ago to be observed.”

She stressed that the EU and US “remain natural partners, natural friends”.

The status change was first reported by German broadcaster Deutsche Welle. An EU official told it that the EU’s Washington ambassador, David O’Sullivan, had not been invited to certain events last year.

At the state funeral for the late President George HW Bush, on 5 December, the EU’s ambassador was not called up in the usual chronological order, from the longest-serving to the newest ambassador, “but he was called up as the last person”, the EU official said.

The previous day, in Brussels, US Secretary of State Mike Pompeo had questioned the EU’s role, in a major policy speech.

“Brexit – if nothing else – was a political wake-up call. Is the EU ensuring that the interests of countries and their citizens are placed before those of bureaucrats here in Brussels?” he asked.

He took issue with the liberal consensus view of multilateral organisations, such as the EU, as guardians of peace and security. He did however praise the EU’s contribution to European prosperity.

Donald Trump strongly supports UK withdrawal from the EU and has hosted leaders of the Brexit campaign, including Nigel Farage.