Condemnation as video on social media shows laughing men burning a model of building in which 71 died in a blaze. 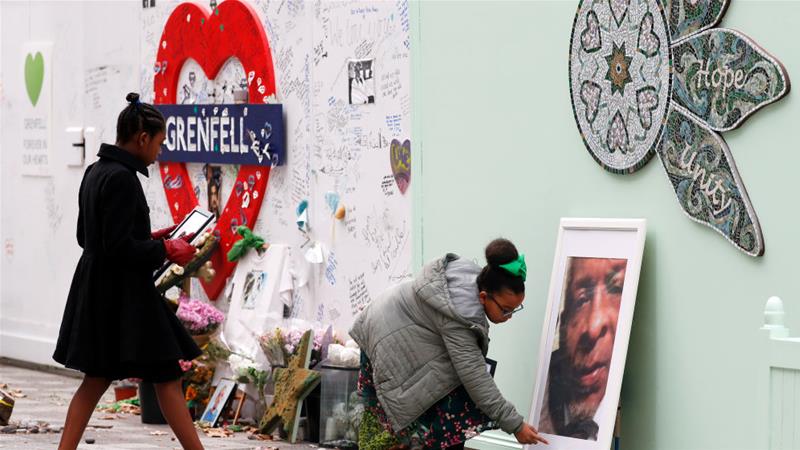 London police arrested six men over a video showing a cardboard model of Grenfell Tower being burned – an act condemned by bereaved families and survivors of the apartment-block blaze that killed 71 people.

British police arrested six men after a video was posted on the internet showing men laughing and mocking the deadly Grenfell Tower blaze.

They were released on Tuesday, but remain under investigation, according to a police statement.

The video showed a cardboard model of the tower with cut outs of residents in the windows being set alight on a bonfire, while those watching made jokes.

Khadijah Mamudu, whose mother and younger brother escaped the firestorm, called the burning of the model a “vile act”.

Grenfell Tower – a social housing block that was home to a close-knit, ethnically diverse community – was engulfed by flames in the middle of the night of June 14, 2017, the country’s deadliest domestic fire since World War II.

“To disrespect those who lost their lives at Grenfell Tower, as well as their families and loved ones, is utterly unacceptable,” Prime Minister Theresa May said on Twitter.

Police Commander Stuart Cundy, who is leading the investigation into the Grenfell disaster, said he was “frankly appalled by the callous nature” of the video.

In the recording, onlookers can be heard saying: “Help me! Help me!”, “Jump out the window!” and “That’s what happens when they don’t pay their rent.”

The Grenfell United organisation for survivors and the bereaved, tweeted: “It’s a disgusting video. Not only is it extremely upsetting to survivors and people who lost family, it’s hateful and offensive to everyone that has been affected.”