Thousands march in Rome to protest against 'climate of hatred' 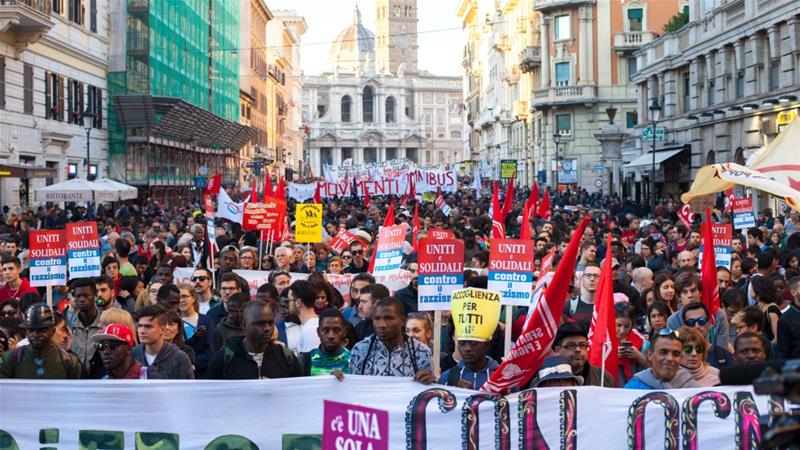 Rome, Italy – At least 20,000 people have marched in Rome to express their opposition to Italy’s populist government which, they argued, has been fuelling a “growing climate of hatred” since coming to power five months ago.

The demonstration on Saturday was organised by left-wing, anti-racism and anti-fascist groups, largely orphans of any mainstream political representation.

Roma families recently evicted from camps rallied alongside students, migrants and refugees, as well as human-rights and social-centre activists from across the country.

The march set off to chants of, “We are all illegals!” with a slight delay, as some buses were held up outside the capital for long police checks.

Among the demonstrators was Domenico Lucano, the mayor of Riace, who was recently put under house arrest and later banished from the southern town on charges of facilitating undocumented migration.

Organisers said the demonstration is the result of an attempt by civil society groups to create a united opposition front at a time when racist incidents are reported with increasing frequency alongside episodes of institutional discrimination – such as the denial of school meals to children born of foreign parents.

“I’m here against the climate of intolerance and complete social and cultural poverty that this country is going through, but also this city,” said Massimo Guidotti, who runs an “intercultural” nursery school in Rome currently at risk of closure.

“We continue working based on equality as a universal right, but we risk becoming [increasingly isolated] if people don’t wake up,” Guidotti added.

Three months after an inconclusive election on March 4, an agreement between the traditionally anti-establishment Five Star Movement and the far-right League party resulted in the formation of Italy’s new government. Since then, polls have shown the first losing in popularity, while the latter has nearly doubled its consensus to become the country’s top party.

Much of the League party’s popularity can be attributed to its leader and Interior Minister Matteo Salvini’s anti-migrant stance, which included preventing NGO-run refugee rescue boats from docking at Italian ports.

While the number of arrivals had already dropped as a consequence of the previous government’s deal with Libya, such actions had an effect on public opinion. They also led to a higher mortality rate and instances of missing people in the central Mediterranean, according to the Italian Institute for International Political Studies (ISPI). 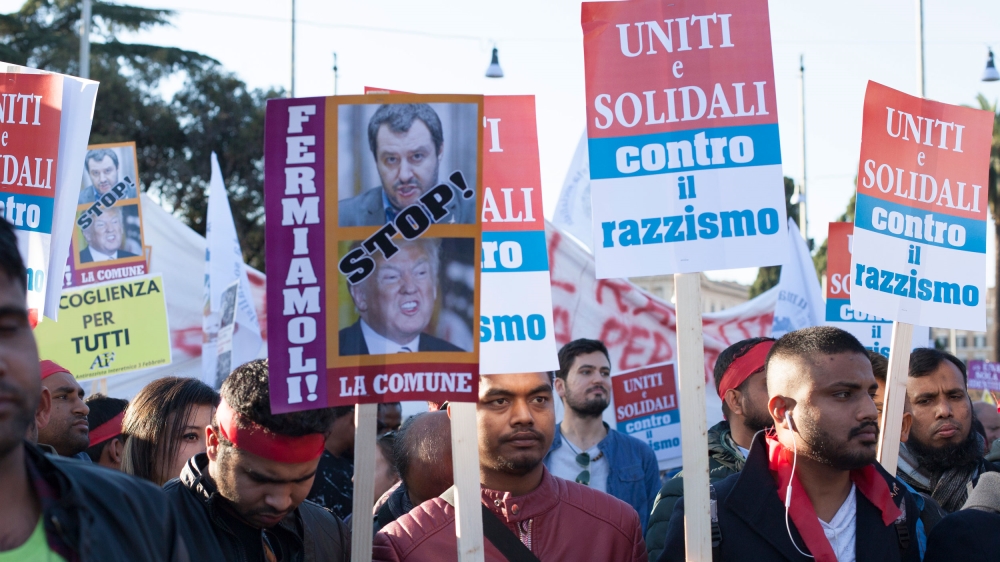 This week, the Italian Senate gave the go-ahead to a “security and migration” decree drafted by Salvini, who is also one of the country’s two deputy prime ministers.

The move brought the bill a step closer to being turned into law within 60 days of its entry into force on October 5. It will now be examined by the second branch of the Italian parliament, the chamber of deputies.

Salvini said the new rules will cut the financial costs of migration, while Italy will continue to grant refuge to those who have the right to asylum.

Among the most contested measures is the abolition of humanitarian protection, which Italy used to grant applicants who did not qualify for asylum or subsidiary protection. This type of permit will be replaced by special permissions to remain in Italy based on stricter categories and issued for a shorter time.

“We want the security of a roof over our heads,” said a speaker from a truck at the head of the march, referring to the bill dubbed the “Salvini decree”, as protesters called for its withdrawal.

‘Climate of hatred terrifies me’

Boubakar Bahaba, 25, came to the march with a group from Caserta, a city near Naples that was the theatre of at least one of a series of “copycat” air gun shootings against migrants over the summer, often dismissed as “pranks” by the authorities and large parts of the public.

Bahaba, originally from Senegal, has a humanitarian protection permit, which allows him to catch up with his higher education while working as a cultural mediator. He learned Italian through one of the programmes run as part of the migrant reception system.

Under the new rules, none of this would have been available to him.

“We need to go forward, not backwards,” Bahaba said. “How can I renew this permit? This worries me,” he says.

Worries also remain that the new measure will lead to more people finding themselves undocumented and without rights on Italian streets, creating “new forms of irregularity.”

According to ISPI, the number could rise to 60,000 more in the next two years than under the current system

The think tank says that during the government’s first five months in office, more people have seen their application rejected, while fewer have been repatriated compared to the previous government’s average.

“Those who decide to cross the sea, or even walk for kilometres to get to the United States’ border looking for a better life – I can only support that personally,” said 22-year-old student Saba Abbate, who was born in Italy to an Ethiopian father.

“The growing climate of hatred terrifies me; on the bus or at the market, we live it every day.”