‘They Threw Themselves Into the Sea, 14 Black Women, All Together’

NANTES, France — On the banks of the Loire River in this port city, students come almost every day to see France’s only memorial to slaves taken by French ships to the New World.

Gray steps lead down to an enclosed space made of weathered wood walls, not unlike the hulls of the ships where the slaves were chained for the voyage across the Atlantic Ocean.

Junior high school students on a recent day fell silent as they descended the staircase to the Memorial to Abolition of Slavery, built right on the river. The waves slapped against the wood much as the sea might have against the slave ships.

“There is always this moment when it clicks, a moment when they go down into the memorial, where there is this relationship between the silence, the water and the writings on slavery,” said Johanna Rolland, the mayor of Nantes. 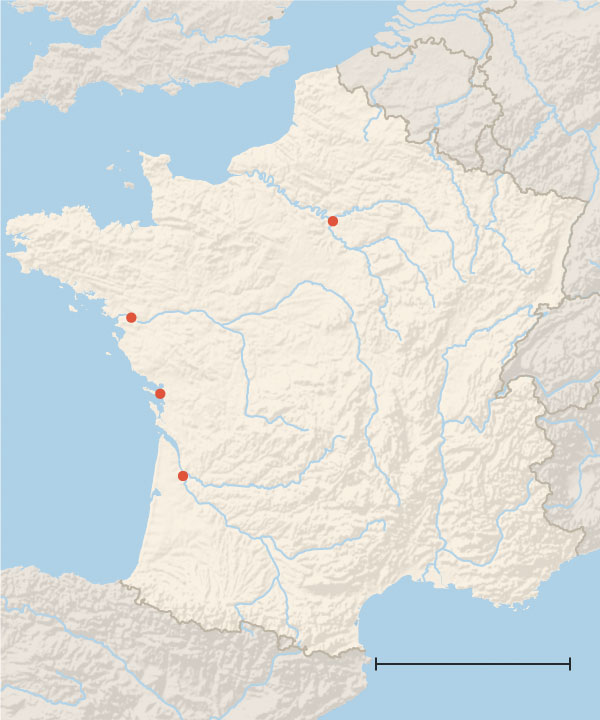 At that moment, visitors, no matter their age, begin to understand the scale of the tragedy, she said.

The city’s opening of the memorial in 2012 and its overhaul of the history museum to take account of Nantes’s role in the slave trade have paved the way for other French port cities, including Bordeaux and La Rochelle, to bring their histories out of the shadows.

France was the third largest of the European slave-trading nations after Portugal and England, transporting an estimated 1.3 million to 1.4 million captives from Africa to the French colonies of Guadeloupe, Haiti, Martinique, Louisiana and French Guiana, where they were sold into slavery.

The traders then brought back sugar, coffee, chocolate, spices and rum to Nantes, the city with the largest share of the French trade, transporting some 450,000 to 550,000 slaves.

In all, an estimated 12 million slaves were taken from Africa to the Americas by European traders; about 10.7 million survived the trans-Atlantic passage, making it the largest forced migration by sea in history.

For years, Nantes, like most European cities, resisted public acknowledgment of this history; descendants of slave traders as well as local businessmen and some politicians did not want it aired publicly.

But local organizations, many representing people of color primarily from the Caribbean, pressed for recognition.

One idea was to “put in place something permanent, such as a plaque that would mark the end of slavery,” said Octave Cestor, who started Memories From Overseas, an organization of people from former French colonies who now live in France.

When officials declined, Mr. Cestor’s organization and others commissioned a statue of a slave breaking his chains, which was placed on a quay near the port.

A few days later “the statue was desecrated, broken,” recalled Michel Cocotier, who now leads Memories From Overseas and is the principal of a Nantes high school.

Opponents of the memorial had rewound the chains around the statue’s ankles and broken off one of its arms, a reference to the “Code Noir,” the quasi-judicial document France issued in 1685 to govern the relationship between master and slave. Amputation was specified as one of the punishments for runaway slaves.

The desecration was a turning point, Mr. Cocotier said. Broad popular support then emerged for building a memorial that would reflect the city’s involvement in the slave trade.

Jean-Marc Ayrault was mayor when the memorial, designed by the American firm Wodiczko + Bonder, opened. He said he did not want to see people set against one another or blaming one another, but examining their shared history.

“When things are not spoken about, not expressed, when this history is hidden, when it’s not brought up, it comes up again and often is used for ill,” Mr. Ayrault said.

Despite the long silence about Nantes’s slave trading history, its impact can be seen physically here and there in the city.

Some streets in the old town are named for slave traders, who were some of Nantes’s biggest patrons — funding schools, universities and orphanages.

A number of houses in the Isle Feydeau, one of the most beautiful quarters, were built by slave traders, and discreet signs of their business remain. Limestone facades are ornamented with occasional caricatures of African captives: thick-lipped, broad-nosed and with curly hair.

On the Isle Feydeau (no longer an island since the Loire has silted up), The Beauty of Ebony hair salon caters to a clientele primarily of West African and Caribbean origin.

Rachel Etoga Yana, who owns the shop, shrugged when asked about the building, which was quite likely built and used by slave traders.

“This was a slave-trading city,” Ms. Yana said matter of factly. “One knows it was like this. This is our history. It’s a part of us.”

An immigrant from Cameroon, she married a Frenchman, moved here and feels completely at home. Yes, she said, there is racism. But it’s occasional and she shrugs it off.

A young boy in the shop, who said he was 17, was getting his hair trimmed. He knew about the city’s slave trade, he said, having studied it in school. But he doesn’t think about it much, he said.

Perhaps he is an exception.

Bruno Chevrier, a history teacher in a Nantes school where students are from both old Nantes families and Afro-French or Caribbean French backgrounds, said that when he teaches about Nantes’s role in the slave trade, the pupils are riveted, especially those whose origins are overseas.

“They listen in class, they don’t react, they are completely focused,” he said. “Their eyes are wide open and they do not say a word.”

Children who visit the city on school trips follow a carefully planned itinerary from the museum to the Isle Feydeau to the memorial.

At the Museum of the History of Nantes, they see examples of the chains that bound the slaves to the ships, and of cloth and other goods that the French brought for African tribal chiefs in exchange for captives.

One of the museum’s most arresting possessions is a drawing of each level of the Marie Séraphique, a ship that could carry up to 312 slaves.

The drawing shows that the bottom of the boat carried barrels of water while the third level carried slaves. They are shown naked, chained to the ship’s wall, seemingly not an inch of space between them.

The drawing also indicates the number and gender of the slaves acquired in Africa, how many survived the journey, and an accounting of the goods bought in the Caribbean with the earnings from the sale of slaves.

“You would not find that ship’s diagram in many other places,” said Anthony Bogues, a historian and head of the Slavery and Justice Center at Brown University, who has worked with the Nantes museum and others across Europe to rethink how they portray their slave trading and colonial past.

In the memorial, three ninth-grade girls from a school in rural Normandy stopped to read a quote on the wall from Nantes’s slave-trading heyday in the 1700s. It was from Louis Mosnier, the commander of the ship The Sun.

“23rd of March, 1774. They threw themselves into the sea, 14 black women, all together, all at the same time, in a single motion — what diligence they had, the waves were very large and rough, the winds blowing with torment. The sharks had already eaten many before it was possible to launch a boat so that we could only save seven of them of which one died.”

As one girl finished reading, she pulled her sweatshirt around her.