PARIS — “Marine Le Pen does not have to say anything,” said Alain Frachon, a former editor of the French daily Le Monde. “Each time France is hit by terrorism, the extreme right benefits.”

Mr. Frachon was reflecting on the fatal stabbing Friday of a police officer by a Tunisian immigrant who had been in France for a decade without legal status before securing authorization to stay in 2019 and a temporary residence permit last year.

In fact, Ms. Le Pen, the leader of the far-right National Rally, did say something. She told the BFM-TV news network that France needs “to expel hundreds of thousands of illegals in France. We need to return to reason. Support our police, expel the illegals, eradicate Islamism.”

How, she asked, was it possible for “somebody who was illegally here for 10 years to have his situation regularized?”

In France, where tensions are simmering after a series of terrorist attacks, Ms. Le Pen’s rhetoric resonates. The left, which is in tatters, bereft of an effective leader or message, appears to have no answer for the moment.

France is divided between vehement supporters of the police on the right, who view the force as beleaguered by the government and exposed to the double threat of vandalism and Islamist terrorism, and a left that has focused on repeated cases of police violence and the state of some French Muslims in ghettoized suburbs of misery. 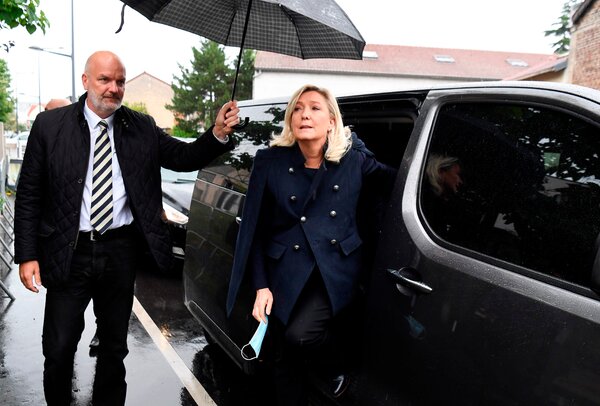 In the attack on Friday, a 49-year-old police officer, identified only as Stéphanie and a mother of two, was stabbed in the neck in Rambouillet, a prosperous town southwest of Paris known for the beautiful grounds of its chateau. Her death will further sharpen this social battle, with its clear echoes of American divisions over the role of the police.

The police shot and killed the 36-year-old Tunisian man identified as the attacker. He was not known to French domestic intelligence services.

Jean-François Ricard, France’s top antiterrorism prosecutor, said that “the words uttered by the assailant” at the time of the stabbing indicated it was a terrorist attack. He did not specifically confirm reports that the attacker shouted “Allahu Akbar,” or God is great, in Arabic.

Agence France-Presse, the news agency, reported that the social media posts of the assailant, identified only as Jamel, were often dedicated to denunciations of Islamophobia in France and attacks on prominent right-wing commentators, including Eric Zemmour, the author of the best-selling book “The French Suicide.”

More recently, those posts were dominated by verses from the Quran. Days after the beheading six months ago of a teacher, Samuel Paty, who had shown cartoons of the Prophet Mohammed to a class on free speech, the assailant had joined a campaign titled “Respect Mohammed, Prophet of God,” the agency reported.

It was not clear, as a wide-ranging police investigation began, whether the man, who was living in Rambouillet, had acted alone. Several recent terrorist incidents have involved self-radicalized individuals who have proved hard for the French authorities to trace.

President Emmanuel Macron reacted to the killing with vows to fight on unbowed against “Islamist terrorism.” Before the killing, he had promised in an interview with Le Figaro to recruit an additional 10,000 police officers and gendarmes, a reflection of his determination to uphold “the right to a peaceful life.” This phrase was quickly mocked after the stabbing.

“A peaceful life, Emmanuel Macron?” Guillaume Peltier of the center-right Republicans wrote on Twitter, accusing the president of “an inexcusable renunciation of courage and action.” As for Ms. Le Pen, she was blunt: “France cannot stand this any longer.”

Mr. Macron, a centrist, has tilted to the right given the apparent absence of any threat from the left, and has identified “Islamist separatism” as a threat to the Republic. A bill still before Parliament aims to counter the sources of radicalization in France’s large Muslim population.

Attacked by the right as too mild and by the left as a twisting of France’s secular model into an instrument of anti-Muslim action, it has illustrated the country’s ever-sharpening fractures.

Opinion polls on next year’s presidential election show Ms. Le Pen, who has dropped calls for France to exit the European Union and the euro as part of an effort to bring her message closer to the mainstream, in a tight race with Mr. Macron.

A runoff between the two of them is seen as the most likely scenario for the second round of the vote. Because many disillusioned, left-of-center Macron voters in 2017 say they will under no circumstances vote for him again, assumptions that France would never lurch to the far right now appear more fragile.

Still, it is hard to gauge sentiment in a country still under lockdown in a bid to counter the pandemic. For the moment, tensions are partly held in check by the difficulty of getting around or getting out. As these restrictions lift over the summer, battle lines will become clearer.

In particular, the success of Ms. Le Pen’s strenuous efforts to bring about what commentators in the country have called her “banalization” — the masking or softening of any rightist threat through a quiet tone and some more moderate policies — are expected to emerge.

Certainly, if nothing else, her call after this latest stabbing for “hundreds of thousands of illegals” to be deported, summoning visions of mass repatriations and chaos, was a reminder of what endures behind her ever-blander persona.