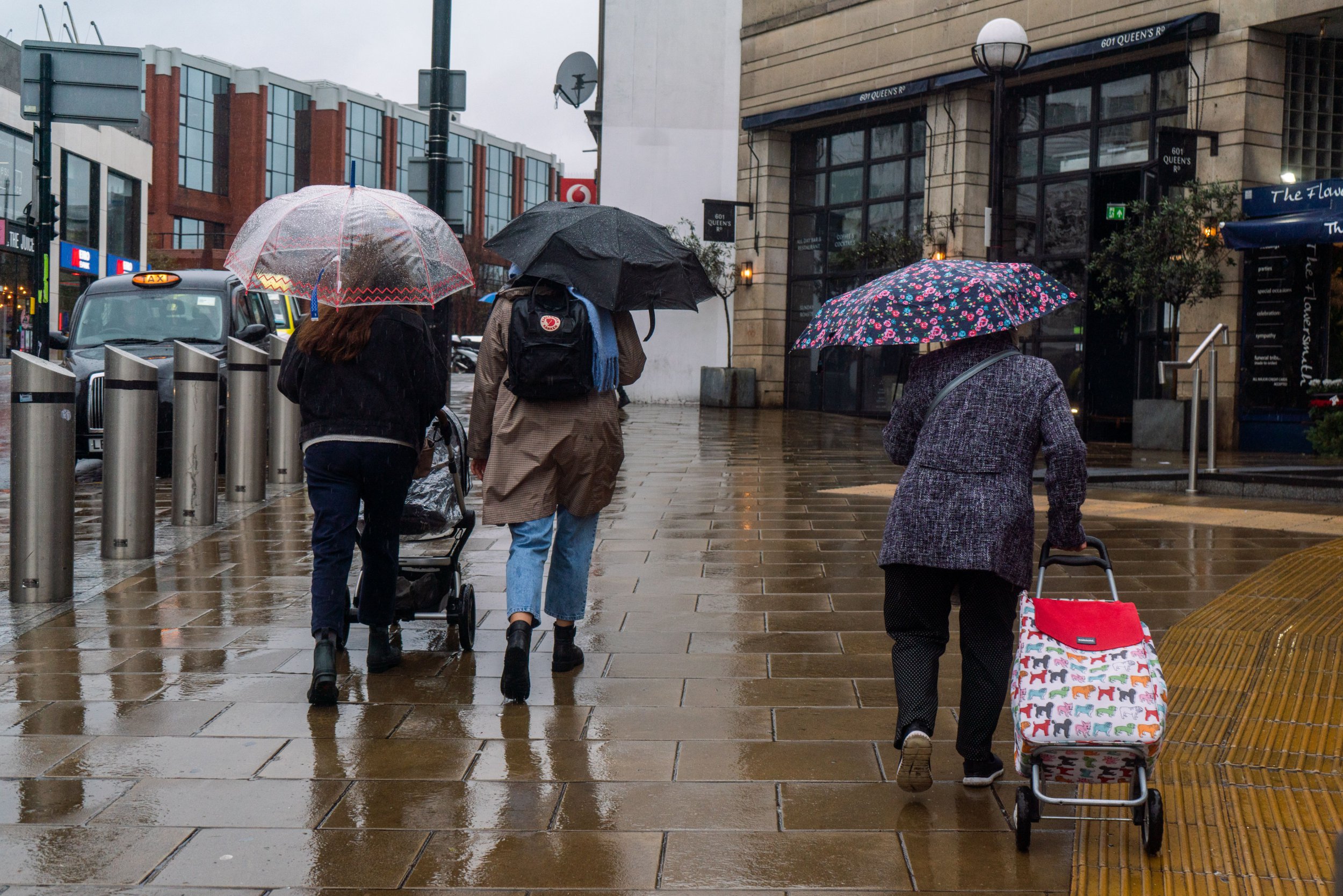 Temperatures in some areas are set to dip as low as -4°C amid concerns that cold weather will lead to a ‘bleak winter’ for people struggling with fuel bills.

The North East will take the brunt of the cold weather, but elsewhere rain and strong winds will not be making it a pleasant day for a stroll.

The Met office has issued a yellow wind warning across areas of South West England and South Wales, with gusts of up to 65mph expected on land and 80mph in coastal areas.

Met Office meteorologist Alex Burkill said that two areas of low pressure were set to bring ‘very wet and windy weather’ between 6am and 6pm tomorrow.

He said: ‘We’ve got two areas of low pressure that are coming towards the UK tonight and into tomorrow.

‘First one’s towards the north-west of Northern Ireland and the second one’s coming up in Ireland and South West England.

‘They’re going to bring some very wet and windy weather.’

He said that while there is uncertainty around the weather on Monday, there is a risk of strong winds in coastal parts of Cornwall, Devon and South Wales.

Mr Burkill said: ‘Tomorrow, it’s worth bearing in mind there’s a bit of uncertainty around this, so different models are doing slightly different things with the track of that low pressure.

‘Particularly on your coastal parts of Cornwall, Devon and South Wales, there is the risk of some significantly strong winds.’

He said that the winds could impact travel from airports in the region, such as Cardiff Airport and Exeter Airport.

Mr Burkill added that while no warning was in place yet, there could also be ‘significant’ rain in western areas of Wales and Northern Ireland on Monday.

‘There could be some significant rain,’ he said.

‘We don’t have a warning as of yet. But, you know, it’s not out of the question.’

Temperatures are also expected to drop to as low as -4°C in parts of the country on Monday morning.

‘It’s going to be quite cold particularly towards the north-eastern UK,’ he said.

Burkill said the sub-zero temperatures could bring an additional risk of ice and fog, and warned of difficult driving conditions arising in its wake.

The UK has enjoyed an unseasonably warm autumn this year which has to date helped insulate people from rising energy costs, but the upcoming chill could soon see many forced to confront the scale of price rises for the first time.

Peter Smith, the director of policy and advocacy at the fuel poverty charity National Energy Action, said: ‘The average annual bill has almost doubled since this time last year. So far the milder than usual weather has protected many from the spiralling bills as they haven’t needed to heat their homes as high or as long as usual.

‘But as the temperatures fall we know that many people will either start building up unaffordable debt or will ration their energy – or self-disconnect completely.

This will have a huge impact on both mental and physical health, especially for those with existing medical conditions.

‘With 6.7m UK households in fuel poverty, this is the start of a bleak winter.’