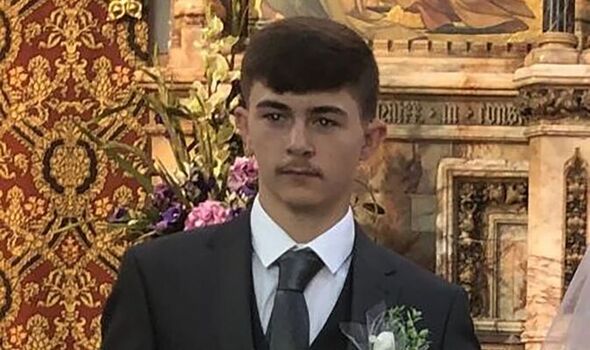 A teenager was allegedly beaten to death by a group of eight men inside a mobile phone shop in scenes described as a “mosh pit”.

Eight men and a 14-year-old boy are on trial for the murder of Michael Toohey, 18, who was cornered in a internet café in Liverpool city centre. The court heard Mr Toohey had fled from a white Volkswagen Golf and rushed into the shop in an attempt to hide.

But a witness, who cannot be named for legal reasons and who will be referred to as “Woman A”, saw one of the defendants 28-year-old Kieron Williams jump out the car and follow the teenager inside the shop.

Footage of Woman A’s interview with police showed her tell officers: “Michael was behind the counter. There was two men that owned the shop stood in front of Michael trying to stop Keiron. Keiron was trying to swing over the counter.

“I’ve obviously came in, started like pushing Keiron away and said ‘look, he’s nothing to do with Gerry. Leave him alone, he’s a kid and you’re a man’. Then he turned round and called me a sl*g and said he was gonna stab me.”

Woman A said Williams was shouting at Mr Toohey that he was “going to kill him”, with Mr Toohey pleading “leave it, please just leave it”.

The jury heard the woman walked outside and took a photo of the Volkswagen’s registration plate, and was shouted at by one of the young boys outside, reports Liverpool Echo. However at this point other men began arriving on scene including two riding pedal bikes. She told detectives and the jury that one of the riders unclipped his bicycle seat and carried it into the shop with him.

In her interview, the young witness told detectives: “All we could see was people just everywhere. it was like a mosh pit, everyone was just everywhere. Arms were getting thrown everywhere and you could just hear shouts, and then about say no longer than two minutes later, all these people started coming out of the shop.”

In her interviews shortly after the incident she told detectives that she saw Keiron Williams throwing a number of punches at Mr Toohey, but when cross examined in court said she “couldn’t really remember” what was happening in the shop.

The jury heard after the men “scattered” she followed her partner and his friend into the shop where Mr Toohey was unconscious on the floor, with blood pouring from his mouth. Mr Toohey’s family sobbed in the public gallery as they listened to her evidence.

Woman A said to Merseyside Police detectives: “I followed in and they were sat there. [My partner’s friend] was trying to give Michael CPR but he was in too much shock.”

The jury were told Woman A tried to take over from her partner’s friend and perform CPR, until police officers arrived and began administering first aid.

The court heard that as she tried to save Mr Toohey, her partner noticed a knife with a plastic cover had fallen from the teenager’s waistband. Woman A accepted placing it into her handbag when her partner passed it to her, because she thought “Michael would get in trouble” if he survived.

However it was later found when police at the scene opened her handbag looking for her ID.

Jon Jones, KC, representing Keiron Williams, told the jury a second knife had been found in the back room of the shop. He showed a picture of the blade to Woman A and asked if she had ever seen it before.

Woman A replied: “It looks familiar but I can’t recall where I have seen it.”

When Mr Jones asked why Mr Toohey carried a blade, she said: “It was for protection. On two previous occasions Keiron Williams had chased him through the city centre.”

Earlier the jury heard that Mr Toohey had been pressured into selling drugs for ‘Gerry’, described as in his 30s, who made him sell “white and brown” every day. Woman A told police Kieron Williams and Gerry were “enemies” in the Langsdale Estate area, and had been “at war” since they were teenagers themselves.

She said: “Because Michael had started working for [Gerry], he was getting seen around the estate with him. Kieron thought that Michael was still associated with Gerry.”