LONDON (Reuters) – As Britain and the European Union restart talks to try to agree a trade deal before the end of 2020, traders are bracing for a new round of volatility for the pound that could end the currency’s recent run higher. 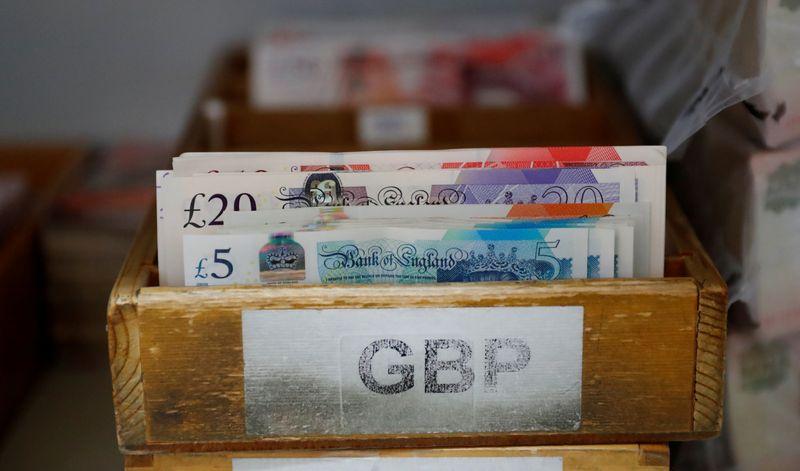 Sterling is up 6.4% against the dollar since June 29, trading close to $1.31 despite the risk that Britain will be cast adrift from the EU in January without a trade agreement in place.

The pound has performed less solidly versus the euro, but a 1% gain since June is still noteworthy given the impasse between London and Brussels.

Dominic Bunning, senior FX Strategist at HSBC, says sterling’s gains owe much to broad dollar weakness and predicts the pound will fall to $1.20 by the end of 2020.

With Britain enduring one of the worst economic contractions among G7 nations, and one of the highest per capita coronavirus death rates in Europe, sterling looks vulnerable to a correction.

Option markets suggest some nervousness, with costs elevated, indicating a fear of unexpected moves GBP3MO=FN GBP6MO=FN. Risk reversals – the difference between call and put option demand – show investors still prefer options to sell the pound, though not as much as in March. GBP3MRR= GBP6MRR=FN

Britain exited the EU in January but has until Dec. 31 to agree a deal on its future trading relationship. The UK government said again on Monday it believed it could seal an agreement in September.

Without a deal, Britain faces a so-called “hard” Brexit many investors fear would significantly damage its economy.

“The point that I’ve been making for the past two weeks is that cable (sterling/dollar) at $1.31 flatters the valuation of the pound, so I would expect cable to drop below $1.30 in the coming weeks, towards $1.27,” he said.

Sterling faces other headwinds too.

A lockdown to fight the spread of coronavirus caused the UK economy – now officially in recession – to record a record slump in second-quarter gross domestic product (GDP).

To save jobs, the government has borrowed unprecedented amounts, swelling national debt to 99.6% of GDP.

“The UK faces a number of fundamental challenges which will only be highlighted and exacerbated by the economic impact of coronavirus,” Bunning said, listing large fiscal and current account deficits, and a reliance on foreign capital.

The Bank of England (BoE) sounded relatively upbeat on the economy at its last meeting, while warning it would take until the end of 2021 for the economy to regain its previous size.

Analysts believe things will worsen when the government’s jobs furlough scheme, which has supported 9.6 million people through the COVID-19 lockdown, winds down in October.

The BoE also said it saw no immediate case to cut interest rates below zero, though money markets suggest that rates could fall into negative territory.

But with investors pushing their net long euro positions to record highs, they also appear reluctant to express their negative stance on the dollar via the pound.

Roger Hallam, chief investment officer for currencies at J.P. Morgan Asset Management, said he expected Britain to forge a deal with the EU by Dec. 31. But the deal “will have more of a ‘hard Brexit’ feel,” he said, limiting any gains for sterling.