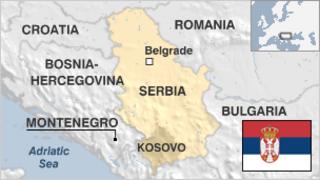 Serbia became a stand-alone sovereign republic in the summer of 2006 after Montenegro voted in a referendum for independence from the Union of Serbia and Montenegro.

The end of the Union marked the closing chapter in the separation of the six republics of the old Socialist Republic of Yugoslavia, which was proclaimed in 1945 and comprised Serbia, Montenegro, Slovenia, Croatia, Bosnia-Herzegovina and Macedonia.

Yugoslavia’s communist leader, Josip Broz Tito, kept the lid on ethnic tensions. The federation lasted for over 10 years after his death in 1980, but under Serbian nationalist leader Slobodan Milosevic it fell apart through the 1990s.

The secession of Slovenia and Macedonia came relatively peacefully, but there were devastating wars in Croatia and Bosnia. Serbia and Montenegro together formed the Federal Republic of Yugoslavia between 1992 and 2003 before forming a looser union.

On coming to power, Mr Vucic pledged a radical overhaul of Serbia’s ailing economy and an accelerated drive towards EU membership.

The reforms would include squeezing the public sector, reforming the budget, privatising state-owned companies and expanding the private sector.

He announced his candidacy for the largely-ceremonial presidency in February 2017, and won a comfortable victory in the first round in April, taking office the following month.

Ana Brnabic made history as the first female and first openly gay prime minister of Serbia when she took office in June 2017. She succeeded Aleksandar Vucic after he assumed the presidency, having served in his government as minister of public administration and local self-government.

Ms Brnabic is non-party, and has a background in local government development. She has continued the policies of Aleksandar Vucic’s pro-EU administration.

Television is, by far, the main source of news and information. The flagship public network, RTS1, is among a handful of outlets that dominate the market.

There are more than 90 TV channels and the average viewer spends more than five hours a day watching television, the highest figure in Europe.

Six TV stations are licensed to broadcast nationally; 30 have regional licences. The national TV broadcasters attract around 70 per cent of the audience.

RTS1 is the most popular channel in Serbia, attracting up to a quarter of the audience and providing strong competition for commercial stations, including leading commercial network TV Pink.

Some key dates in Serbia’s history:

1918 – Kingdom of Serbs, Croats and Slovenes – later Yugoslavia – formed after World War I.

1945 – Together with Slovenia, Macedonia, Croatia, Bosnia and Montenegro, Serbia becomes one of republics in new Socialist Federal Republic of Yugoslavia under Josip Broz Tito.

1991 – Slovenia, Macedonia, Croatia and Bosnia break away from Yugoslavia.

2002 – Trial of Slobodan Milosevic on charges of genocide and war crimes begins in The Hague.

2006 – Montenegro votes in a referendum to separate from Serbia and declares independence.