Alexei Navalny was stopped from leaving Russia over an unpaid fine, a move he said was illegal. 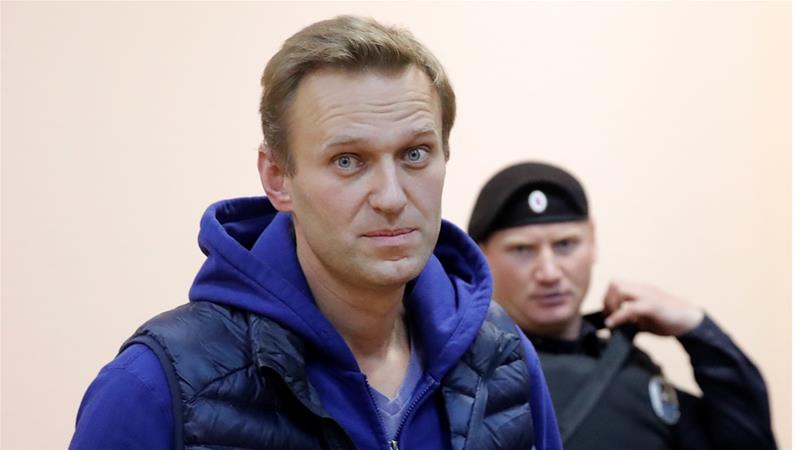 Russia’s main opposition leader, Alexei Navalny, has said he was prevented from flying out of Moscow for a European court ruling on whether his recent detentions have been politically motivated.

“Border guards are saying that leaving is forbidden for me,” the 42-year-old Kremlin critic wrote in a Twitter post on Tuesday.

“There is some kind of letter that says I am prohibited from leaving, but there is no explanation why.”

Authorities in Russia said Navalny was prevented from leaving the country over a $31,000 fine connected to a 2013 conviction, a move he said was illegal.

Navalny said he had checked the registry on the eve of his flight and said it contained no information about the fine.

He said he was not notified of the fine’s sudden enforcement in writing as the law dictates, or given the mandatory five days to pay it, the Reuters news agency reported.

“It’s interesting – what will the authorities do next?” Navalny wrote on his blog.

“The money was sitting in my lawyer’s account so it only took half an hour to pay the fine. Does that mean I can leave the country tonight or tomorrow morning?”

The anti-corruption campaigner also posted a photo on Instagram of himself at Moscow’s Domodedovo Airport, where he said border guards had taken his passport.

Navalny was barred from leaving the country between 2013 and 2017, when authorities refused to issue a passport because of legal cases against him.

He was eventually given a travel document and allowed to leave the country in May last year to seek treatment in Spain.

Russian authorities have in recent months turned up the heat on Navalny, after President Vladimir Putin’s approval ratings took a beating over an unpopular pension reform and the ruling United Russia party suffered setbacks in regional polls.

Navalny sought to challenge Putin at a presidential election in March, but was barred from taking part because of the conviction he says was fabricated.

He finished a month-long sentence in September for organising anti-Kremlin protests when he was immediately re-arrested and charged over a separate rally.

The Yale-educated lawyer was sentenced to a further 20 days and finally released last month, as rights group Amnesty International described him a “prisoner of conscience”.