Royal expert Daniela Elser said the Queen and her courtiers may be starting to show a more aggressive attitude when it comes to their public relationship with Meghan and Harry. The most recent row centres on whether Harry asked the Queen for permission to name his daughter Lilibet. In an op-ed penned for News.com.au, she wrote: “The palace has not denied the BBC’s initial reporting or issued any sort of statement distancing themselves from the initial claims.

“(The BBC appears to be standing by their report too.)

“This in and of itself is extraordinary and if the palace does continue to stand its ground then this would represent the House of Windsor’s biggest pushback against the rabble-rousing couple since their sensational departure from the palace in January last year.

“After months of having been the target of the Sussexes’ fusillade of painfully public criticism, are the Queen and her army of courtiers finally starting to far more aggressively – and obviously – fight back?

“Is this a case of no more Mrs Nice Queen?” 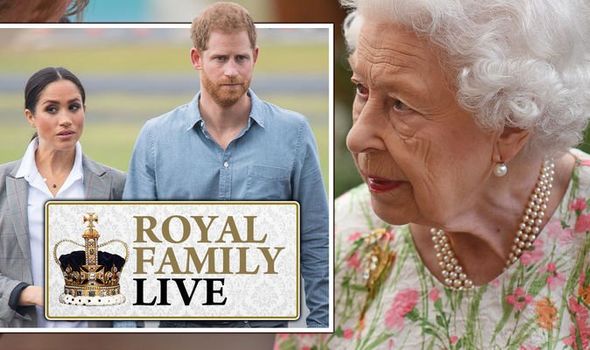 Earlier this week the BBC published a Palace source claiming the Queen was “never asked” by Prince Harry over the use of Lilibet.

The Duke and Duchess of Sussex quickly responded to this report, with their spokesperson saying Prince Harry had “shared their hope” of naming their newborn daughter using the Queen’s childhood nickname.

Their statement read: “The Duke spoke with his family in advance of the announcement, in fact his grandmother was the first family member he called.

“During that conversation, he shared their hope of naming their daughter Lilibet in her honor.

“Had she not been supportive, they would not have used the name.”

Prince Harry and Meghan’s daughter was born on June 4 at a Santa Barbara hospital.

The couple said in a statement released two days after the birth that the baby, Lilibet ‘Lili’ Diana Mountbatten-Windsor, was named after the Queen and Princess Diana.

Meghan and Harry have been fiercely critical of the Firm over the past months and made damaging claims during some of their interviews and public appearances.

However, they have continued to speak highly about the Queen, with Meghan telling Oprah Winfrey in March Her Majesty has “always been wonderful” to her and Harry saying he is in touch with his grandmother and she will always be his Colonel-in-Chief.

According to People magazine, the baby was introduced to the monarch via video call after arriving home from the hospital.

Follow this liveblog for regular updates on the Royal Family