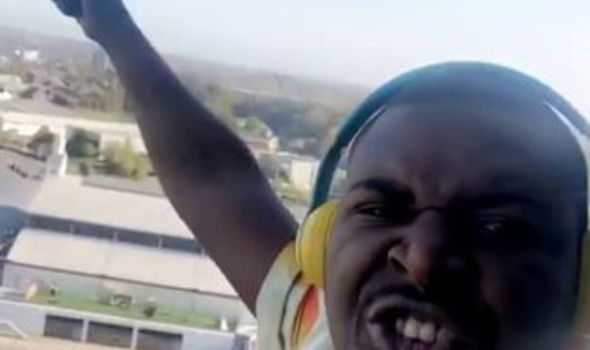 Michael Alunomoh, 34, was listening to Tupac’s ‘Hit Em Up’ when he fired blanks from a handgun and an assault rifle into the sky. Alunomoh had been listening to ‘Hit Em Up’, which includes the lyrics “Grab ya Glocks, when you see Tupac. Call the cops, when you see Tupac”. In April 2020, Alunomoh, who is the CEO of Truth or Dare Records, fired shots into the sky from his flat in Chatham Dockside before armed police officers arrived at the scene.

In an earlier trial, the jury was told how Alunomoh, claimed to hear a voice in his head telling him to “disturb the peace”.

The court was told he did so in order for police to arrive and give him the treatment he needed.

The trial last year was aborted after the judge involved fell ill.

Minutes before his re-trial at Maidstone Crown Court on Monday, he admitted to three offences of possessing imitation firearms – including two blank-firing 9mm self-loading pistols, and a Camp assault rifle – and intending to cause fear of violence.

At the time of his arrest, three psychiatrists claimed Alunomoh was suffering from mental issues.

Dr Bernard Chin revealed Alunomoh had taken the words from Tupac’s song to grab his guns and summon the police.

Dr Chin added: “I asked him what he did after hearing the lyrics and he told me he fired his guns from the balcony.”

He also claimed Alunomoh had been inspired by the song when asked.

The court also heard how Alunomoh had told the police he was a “king waiting to be crowned”.

On March 23, 2020, a month prior to the incident he had been sectioned by the police.

The police had spotted the accused driving erratically and when he was stopped, he began to eat grass.

The court was also told, Alunomoh, had phoned the police the night before the gun incident in April 2020, saying something was wrong in his head.

Alunomoh told police after being arrested: “I was shooting. I was not killing anybody.

“I was just doing my own thing because it’s still in my head.

“Then the police came and I said ‘You have to treat me, you have to help me’.”

He also denied he was attempting to scare the public.

“I was just doing it to the sky and shouting ‘Call the police’.”

Since his first trial, Alunomoh has been receiving treatment in hospital.

Barry Kogan, defending, asked the court to consider an order to place his client under the Mental Health Act or to be given a term that leads to his release, after his client has already served the equivalent of a three-year and four-month jail term on remand.

The hearing resumes this month on January 26.