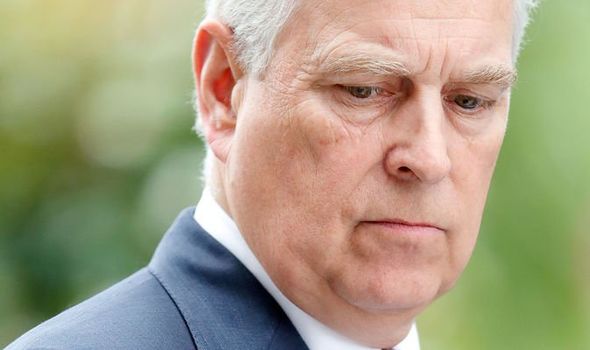 The Duke of York believes he has a “genuine argument” to halt the case brought by Virginia Giuffre because she is not a permanent American resident.

Ms Giuffre, 38, claims she was forced to have sex with Andrew on three occasions in 2001 while she was trafficked around the world by paedophile Jeffrey Epstein and his lover, jailed British socialite Ghislaine Maxwell.

Mother-of-three Ms Giuffre has lived in Australia since 2002.

New York district judge Lewis Kaplan, who is expected to decide imminently whether the Duke, 61, will face a full civil trial in the autumn, has already dismissed Andrew’s lawyer’s argument.

But his team believes it has found a new angle that will finally prove Ms Giuffre’s case cannot go ahead – federal law explicitly bans two parties who are not US residents facing each other in court.

The Duke’s lawyer, Andrew Brettler, said Ms Giuffre was living in a £1million home in Perth when she filed her lawsuit and had spent less than two years in the US since moving Down Under in 2002.

The prosecution team already has a deadline of January 14 to prove her residential status.

A source with knowledge of the case said: “This could potentially be problematic. The judge has already decided there was no case to answer in terms of the domicile argument, but Andrew’s team are not taking this lying down and believe they have a genuine argument to get this thrown out.

“If they can prove under federal law, where Ms Giuffre has filed her case, that there is precedent not to bring a case where both parties are not US residents, then it should be halted immediately.”

It is understood Andrew’s team will argue that US federal law clearly makes a point of “jurisdiction diversity”.

The issue can rely on a maximum of one of the parties being nondomiciled in the US, but if both are non-residents then there is no case, they believe.

A source said: “Even if the judge rules there is a case for a full trial, there is a long way to go.”

Andrew argues that he wants to avoid going up on the witness stand against Ms Giuffre to protect the Queen and the wider institution of the monarchy from devastating reputational damage – rather than an out of a desire to avoid having his version of events shredded in open court.

Sources close to Andrew cite the damages case that the Duchess of Sussex won against a Sunday newspaper for publishing a letter she wrote to her father, as evidence that going to court is rarely a good idea.

Even though she won, Meghan, 40, was forced to admit misleading the High Court over co-operating with the authors of a flattering biography of her and her husband Prince Harry, 37.

It has been revealed how Prince Andrew is in a race against time to complete the sale of a £17million chalet to meet the cost of his huge legal bills, which have topped £2million. The Queen will not pay her son’s eye-watering costs and “would not assist” him in paying a financial settlement, which could be as much as £3million if handed down by the court.

The sale of the chalet in the exclusive ski resort of Verbier, Switzerland, that he owns with his former wife Sarah Ferguson, is understood to be the Duke’s only method of raising substantial amounts of cash.

But it is further complicated by the fact that the Yorks still owe £6.6million from the purchase to a French socialite who sold them the seven-bedroom mansion.

As Andrew prepares to hear his fate, his ex-wife and children enjoyed “a final family holiday” at the chalet. Sarah, 62, was joined by her daughters Beatrice, 33, and Eugenie, 31, along with their husbands and children this week.

Yesterday, the Duchess declared it was “onwards and upwards” as she headed back from the Alps with her daughters and grandchildren to the UK.

Meanwhile, Andrew faces a tense wait to hear if Judge Kaplan will throw out the sex abuse claim against him.

If the judge does decide that Ms Giuffre’s case should go to a full trial, insiders have said the option to settle out of court “remains on the table”.

One source said: “No discussions have been had regarding a financial settlement – the Duke wants to clear his name. [But] this is a US civil litigation, being fought in US court with US lawyers.

“And given that the vast majority of US civil litigation is settled out of court, it would always remain an option on the table.”