Police were seen leading the man away on Tuesday afternoon after various preachers used a microphone to spout “awful” views criticising the LGBTQ+ community. Jordan Denny, who witnessed the public spat in Leeds city centre, said a crowd quickly gathered to defend the LGBTQ+ community.

In the clip, the man with the microphone says: “Does God accept the LGBT community? Listen, homosexuality is an abomination in the eyes of God.

“It says in the bible if a man lies with a man the way a man would lie with a woman it is an abomination.

But Jordan says his friend, who is transgender, was abused by one of the preachers multiple times as he repeatedly “called her a man”.

Initially, there were only six people defending the LGBTQ+ community, but Jordan says a huge crowd then began chanting in support. 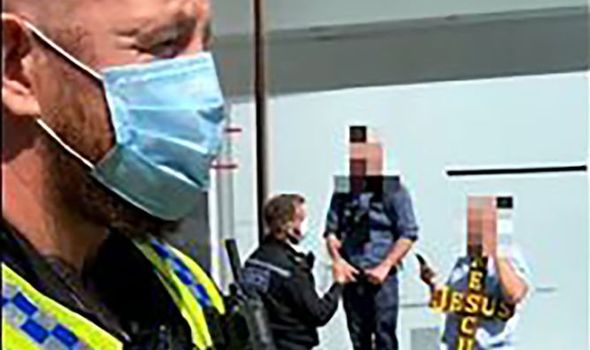 Jordan said: “There were only six of us at first, stood around, but that turned to 20 and 30 really fast.

“Once we started chanting more came around and we had about 70 people supporting us against discrimination.

“He was Anti LGBTQ+, racist and said that this was freedom of speech. However, this is a hate crime. We quickly called the police and made sure they got taken down and arrested.

“I’m so happy that as a city we became closer and came together to stop this awful speech! He was making us all feel very little and overpowered us with his speaker.”

One man was seen being led away by police after crowds shouted “lock them up” and “arrest him” at the preacher.

West Yorkshire Police confirmed a man is currently in custody after being arrested.

The man seen preaching in Briggate on Tuesday afternoon was not the same one commonly seen in the city centre.

A spokesman for the police said: “Police in Leeds received several reports of an ongoing hate incident on Briggate in Leeds during Tuesday afternoon.

“Officers attended and located and arrested a male on suspicion of public order offences. He remains in custody and enquiries are ongoing.

“All reports of hate offending are taken very seriously by West Yorkshire Police and are fully investigated.”