Travellers from mainland Portugal to England will have to quarantine from 04:00 BST on Saturday, just weeks after the country was put on the safe list.

Wales and Scotland had already imposed the mandatory two weeks of self-isolation earlier this month.

Quarantine-free travel is still allowed from the Portuguese islands, the Azores and Madeira.

Meanwhile, Sweden has been made exempt from quarantine for Wales, England and Scotland.

People travelling to England, Wales and Scotland from Hungary and Reunion will also be required to self-isolate, while England is additionally requiring arrivals from French Polynesia to quarantine.

Portugal, one of the UK’s most popular holiday destinations, was given an exemption from UK quarantine rules as recently as 22 August.

Portugal expressed “regret” over the quarantine decision for the mainland, but said it valued the continued inclusion of the Azores and Madeira on the safe “travel corridor” list. 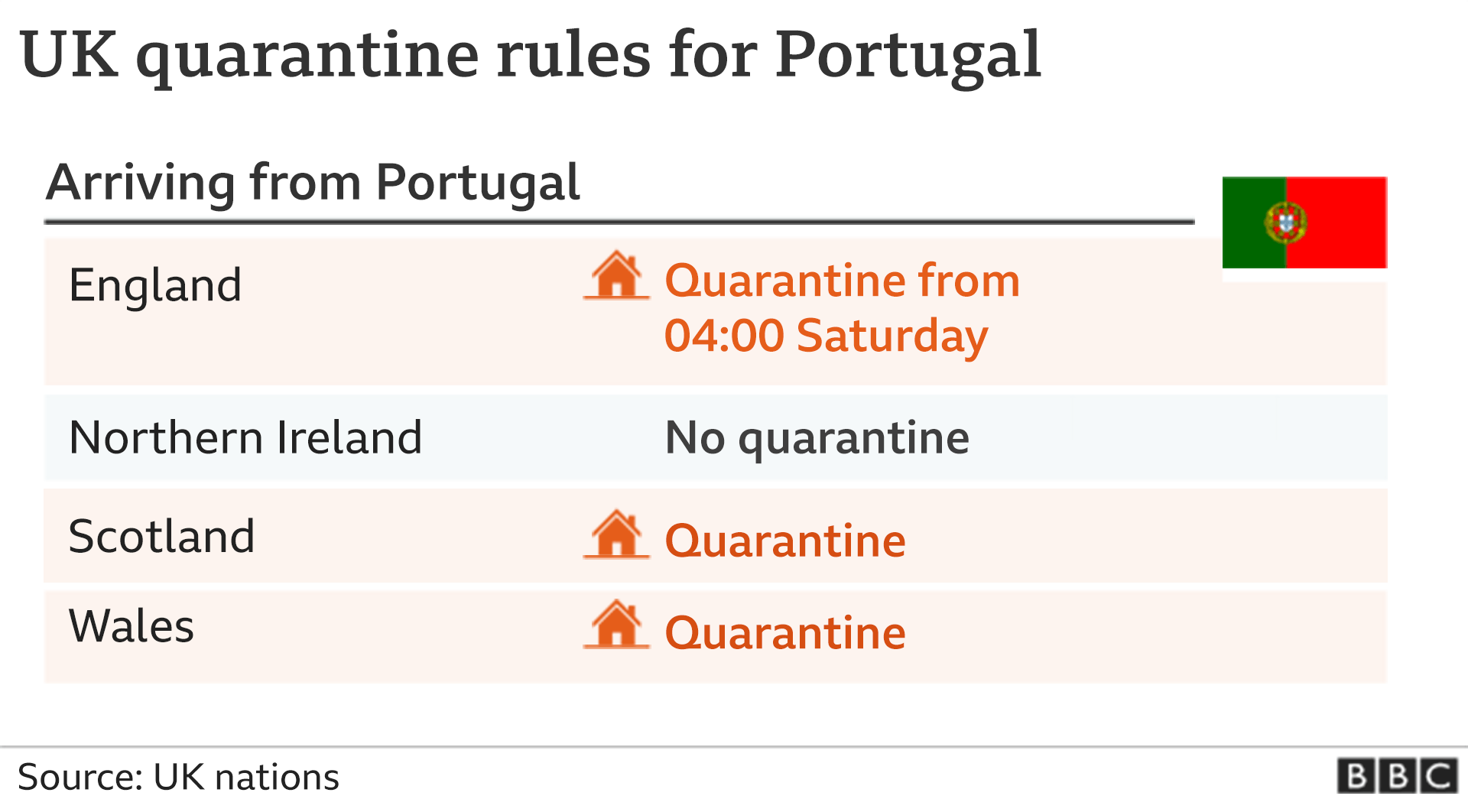 It comes as the UK’s confirmed coronavirus cases rose by another 2,919, the fifth consecutive day that the figure has been more than 2,000. Another 14 deaths were reported within 28 days of a positive test.

Transport Secretary Grant Shapps said that because of “enhanced data” the government was able to assess the infection rates of islands separate to their mainland countries.

On Wednesday, quarantine requirements were also imposed on seven Greek islands, the first time that different self-isolation rules had been applied to the mainland of a country and its islands.

Mr Shapps also stressed that travellers must fill out the Passenger Locator Form on arrival to the UK, a day after the prime minister said enforcement of this part of the quarantine rules would be stepped up.

“It is a criminal offence not to complete the form and spot checks will be taking place,” Mr Shapps said.

Figures show that nearly 2m spot checks have been carried out to ensure travellers have filled out the form, and calls and text messages were made to 136,500 people to check they were quarantining.

Successful contact, where the traveller has been spoken to or responded to a text, was made 66,773 times with 64,800 people confirming they were self-isolating. Just 34 fines have been issued.

Travel industry body Abta, along with the chief executives of airlines such as easyJet, Ryanair and British Airways, is calling on the government to introduce testing on arrival at airports and to change quarantine policy so mainland regions can be treated differently.

“Every country, mainland or island that is taken off the government’s travel list lessens the ability of travel businesses to operate and increases the necessity for the government to provide tailored industry support,” said an Abta spokesman.

Rory Boland, editor of Which? Travel, said holidaymakers were now “more acutely aware” of the risks of travel abroad, but said the “last-minute” decisions meant many missed out on refunds or were “extorted” with additional airfares if they tried to rush home.

“It’s obvious that the current travel corridor system is not working for passengers, and becoming completely detrimental to the already dwindling trust in the sector,” he said.

Sweden adopted a lighter-touch strategy for dealing with the pandemic compared with most other European countries, deciding not to institute a widespread lockdown, and putting in place relatively few restrictions.

This was based partly on the idea of letting Covid-19 sweep through the population creating so-called herd immunity. Such an approach was considered but then abandoned in the UK.

Research published in August suggested exposure to coronavirus was similar in Stockholm and London, based on antibody tests, despite the different lockdown strategies.