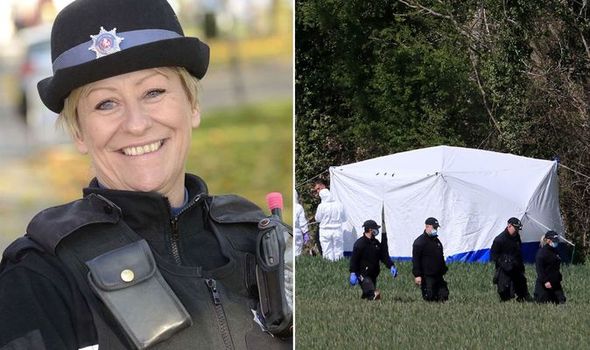 Her grieving colleagues left a heartfelt message nearby, which read: “Your duty is done. Take it easy for now we will take it from here! Thinking of your family at this time. From the Guys in Blue xx”. Villagers also left flowers in memory of the PCSO mother of two as tributes poured in from family and neighbours.

She was attacked as she walked her Jack Russell in Akholt wood in Snowdon, near Dover.

Her neighbours in the Kent village fear that Julia, 53, – a domestic violence specialist – was killed at random.

Resident Mary Bosson said: “We all walk our dogs around that area. We won’t be doing it now.”

Dorothy Morgan said of grandmother Julia: “It’s so chilling. She was a really nice girl. I just can’t believe it.” 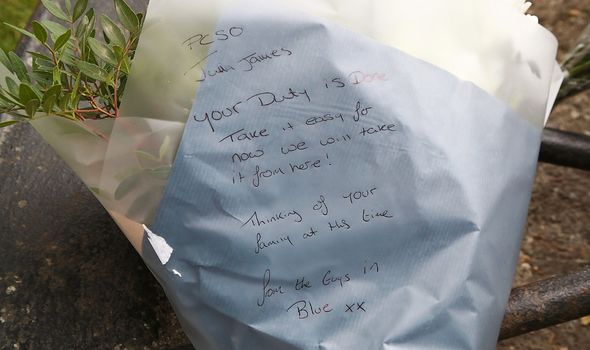 Another said: “It’s definitely frightening that there could be a killer on the loose.”

A white forensic tent could be seen at the scene yesterday as dozens of officers used rakes in their search for clues. Flowers left nearby carried the tribute: “Dearest Julia. R.I.P. You made me laugh. The kindest person I ever met. Love, Becki x.”

Julia – who is understood to have suffered head injuries – was found on Tuesday afternoon.

Her husband Paul and her two children from a ­previous relationship were being ­comforted by police family liaison officers yesterday.

Her ex-partner Wayne Davis, 62, said: “We ­don’t know if it’s a random attack or whether she was ­targeted by someone, possibly because ­of ­her job.

One neighbour, who did not want to be named, said: “The last time I saw her out the window she was getting into her car over ­ the weekend. ­

“I know she’s been working very hard through lockdown.

“But we would always say hello and catch up. She just had this beaming smile.”