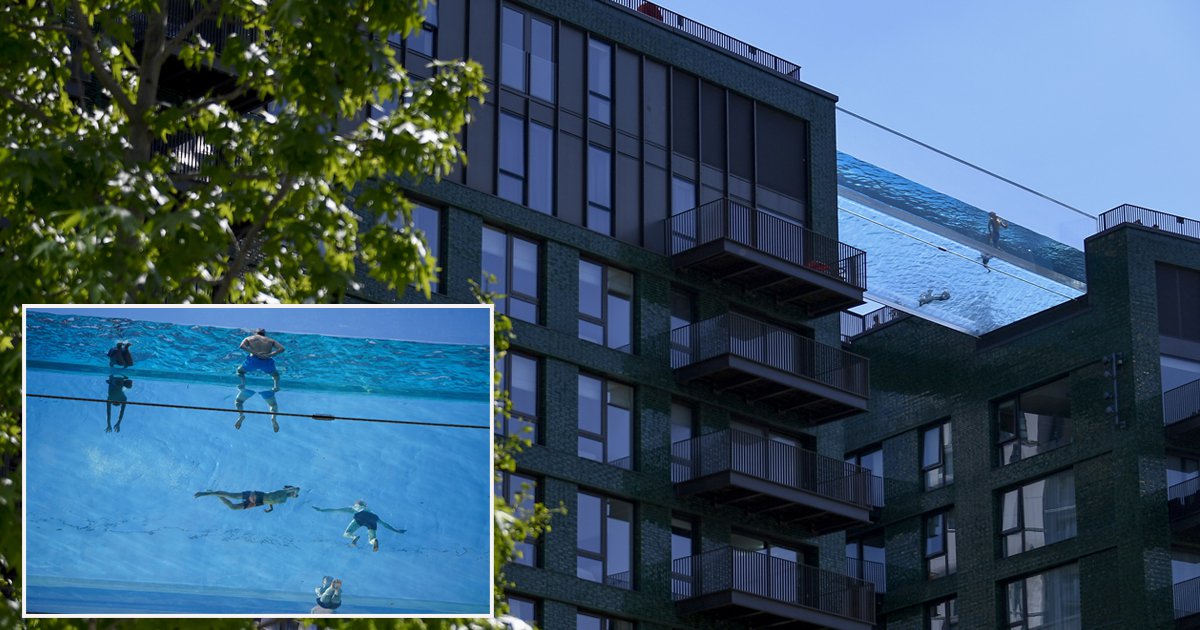 The world’s first swimming pool suspended between two buildings has been getting a lot of attention this week.

Residents of Embassy Gardens in London can enjoy the experience of staring down 35 metres (or 10 storeys) at the ground below, as they do a lazy front crawl to the other side of the development.

But not everyone who lives there will get to benefit from the luxury facility.

People who bought their flats under a shared ownership scheme, buying part of the property and paying rent on the rest, are not invited.

In London, to qualify for shared ownership you must have a household income of £90,000 or less a year.

Only those who purchased or rented their apartments at full price – so, only the wealthy residents, as most are currently priced at well over £1 million – can access the pool. 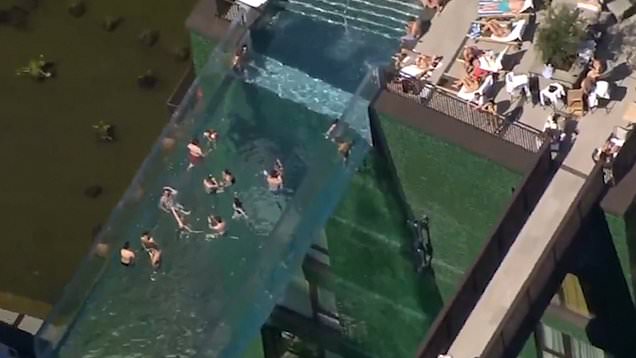 Others will have to just look at it from their windows.

The developer said that this is because shared ownership properties have a lower service charge so don’t pay to maintain the pool and other facilities like a rooftop bar, cinema and gym, making things more affordable.

But it has been seen as a sign of the capital’s inequality, with some suggesting those who are not able to swim are treated as ‘second class’.

They are not able to pay on a one-off basis to use the pool, or to sign up for it as an optional extra when they buy their property.

Some shared ownership residents of Embassy Gardens, situated next to the new US embassy, shared their thoughts on the Home Views website, which said it had verified their identity.

‘I cannot use the facilities in the other building as we have shared ownership of the property which I feel is quite unfair,’ one person wrote.

Another said that they had to use a different ‘poor door’ out of sight of the main entrance and claimed: ‘I wish I had known the extent of the discrimination we would be shown as shared owners.’

One resident said: ‘The service charge is also extremely high for the quantity and quality of service.’

However, some wrote that they were very happy with their homes and felt they were good value.

The pool has also been seen as a symbol of a missed opportunity to create more social housing during the regeneration of Nine Elms in south London.

Labour councillor Aydin Dikerdem, who represents nearby Queenstown, tweeted: ‘This former industrial area in the heart of London was an incredible opportunity for a city facing a severe housing crisis.

‘Yet from its inception, Conservative politicians have prioritised the private gain of developers over the public good.’

He said money from a Section 106 agreement (money developers pay for community benefit, in exchange for planning permission) was used for an extension of the Northern Line, rather than affordable homes.

The tube line work should have been funded by the government or via a Community Infrastructure Levy instead, he argued.

‘We’re never again going to have all this abandoned industrial space which could’ve transformed the lives of people in a borough where thousands are statutorily homeless or spending half their income on private rent,’ he said.

A spokesperson for housing association Optivo said: ‘We’re one of two social housing providers who own and manage blocks within the wider Embassy Gardens development.

‘Our residents live in three blocks. These are separate to the ones managed by Ballymore, who also look after the wider estate.

‘As a charitable housing association, ensuring our homes are affordable for our residents is a top priority.

‘Some of the privately owned blocks in the development have additional facilities, including access to the pool, for which their residents pay additional service charges.

‘When we purchased the blocks, we made the decision not to buy into these
additional services as these are affordable homes and it’s important we keep
our service charge as low as possible.

‘We’re always clear with residents from the beginning what services and
facilities are available in their block.’

A spokesman for Peabody said: ‘Generally speaking, people don’t have access to blocks where they don’t live, regardless of tenure.

‘It is important to keep service charges as low as possible for shared owners and that is what we have tried to do here.

‘This was clear from the outset and we did not offer access to services and amenities in separate blocks to our residents.

‘This considered approach to keeping service charge costs as affordable as possible ensures that we are able to provide great quality, much sought after homes in central London areas for people who are not able to buy outright.’