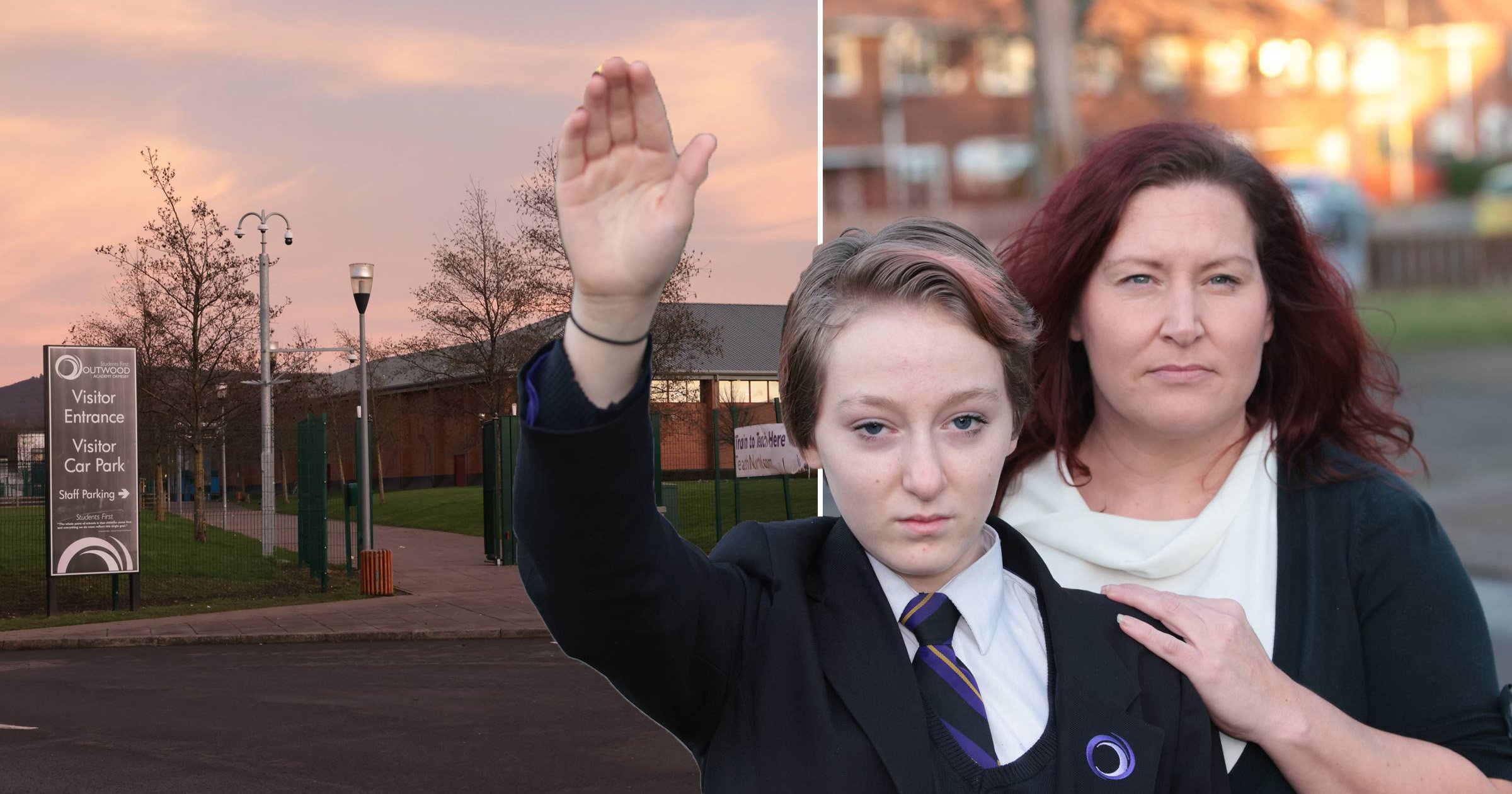 A mum-of-six claims her children’s secondary school is making pupils line up at break time and raise their hands in the air ‘like Adolph Hitler’.

She says her son Tyler, 15, and daughter Tilly, 13, are told by teachers to stand with their left foot on a line and raise their hand in the air for silence at break time.

‘They are not happy, they have even said kids are shouting “Heil Hitler!” when they are doing it,’ said Samantha.

‘It’s like a military camp – it’s like a salute. Why are the kids having to raise their hand?

‘It’s just not positive. We shouldn’t be giving out that system for children. It’s a really bad thing to be putting out there.

‘In primary school you raise your hand to get attention. They’re going against what they are told as a child – put your arm up to get help.

‘I feel they are being turned into performing monkeys. What are they going to do next? Rub their tummy when they’re hungry? It’s an unnecessary action.’

Samantha says she emailed the school about the rules on Monday but did not receive a response.

The full-time mum said: ‘A lot of parents aren’t happy about it. The kids have been through a lot.

‘They’ve gone to school after a horrible two years of home schooling. They’re being treated like little children. My son is 15-years-old and he’s about to leave to go out to work.

‘I don’t have issue with them standing in line. But standing with their left foot and then putting their hand up to be quiet – it’s gone a bit far.’

Urging the school to improve its communication with parents, Samantha said: ‘We didn’t know there was a new head until the kids came and told us.’

‘It’s not good, I’m not going to let my daughter do that in school. In my eyes they’re in there to be taught school work not to be lined up in a playground,’ she said.

Lisa, a 39-year-old shop assistant, said she has told her teenage daughter not to take part in the lining up method.

She said: ‘She doesn’t like it, she said “mam I’m not doing it”. I know some kids stand there and laugh about it but it’s not a laughing matter, this is serious.

Gemma Trattles, Associate Executive Principal at Outwood, said the raising of the hand has been brought in to show teachers that pupils are paying attention.

She said: ‘We introduced this process for entering the school at the start of the day and end of break times this week, and the feedback from students has been really positive, which makes these complaints all the more surprising and saddening to hear.

‘Although we have only introduced this process, children across the country have been lining up after break and lunch times for decades and the raising of the hand is simply a gesture that informs the teacher that the student is attentive and ready to enter the classroom. Again, this is something that happens in many schools.

‘Also, we want to state clearly that if any student is heard saying phrases like those the parent has alleged, this would not be tolerated in school as it is completely unacceptable.’

Ms Trattles said the school wants to work with their parent community to help better support the students.

She said that, while they can confirm numerous letters from the new Head of School have been sent to parents, as part of their ongoing process of learning and improving they will look at alternative ways they could have delivered the news to parents.

Ms Trattles added: ‘We hope with this issue behind us, the school community will come together to work with our new Head of School, Toni Wilden, to help continue the good work the school is doing to raise standards and transform the lives of our students.’