Anna Patalong, who performed at the Classical Spectacular over the weekend, wore a yellow gown with a blue waistband band printed with gold stars – and boldly declared her outfit represented EU colours.

The following day, officials ordered the singer not to wear the dress for her Sunday performance after they received a complaint.

Ms Patalong’s husand, Benedict Nelson told the London Evening Standard: “I think it’s worrying that someone should be told what they can and cannot wear.

“On Sunday they said they had had a small complaint and they said it would be better if she wore a different dress. 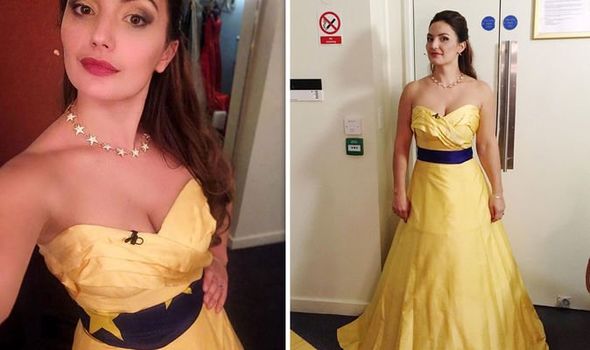 “She was upset that it had been seen as a political statement. It’s ridiculous. At best, it’s someone wearing a dress.”

Ms Patalong shared a picture of her outfit on Instagram before her performance, with the caption: “Rocking some EU colours for tonight’s concert.”

The singer, who voted Remain, included Union Jack flags in her sash which appeared during her performance – in what appeared to be a declaration of support for the EU.

The next day, Ms Patalong opted for a red dress.

Her husband Mr Nelson lashed out at officials for demanding she change her outfit.

In a furious Twitter post, he said: “Yesterday a man was ejected from the Royal Opera House for wearing a pro EU T-shirt.

“Today my wife was asked to change her dress from yellow and blue at the Royal Albert Hall as the colours were too provocative.

“Two artistic venues people. Anyone who knows their history knows what that sounds like.”

Mr Nelson also posted an image of his wife’s performance outfit, adding: “If you can’t enjoy a three hour concert because a performer wears some visible gold stars for three minutes of it, you need to have a word with yourself.”

The Classical Spectacular concert was held on the same day as the People’s Vote march on 23 March, where an estimated one million people gathered in central London for a mass demonstration.