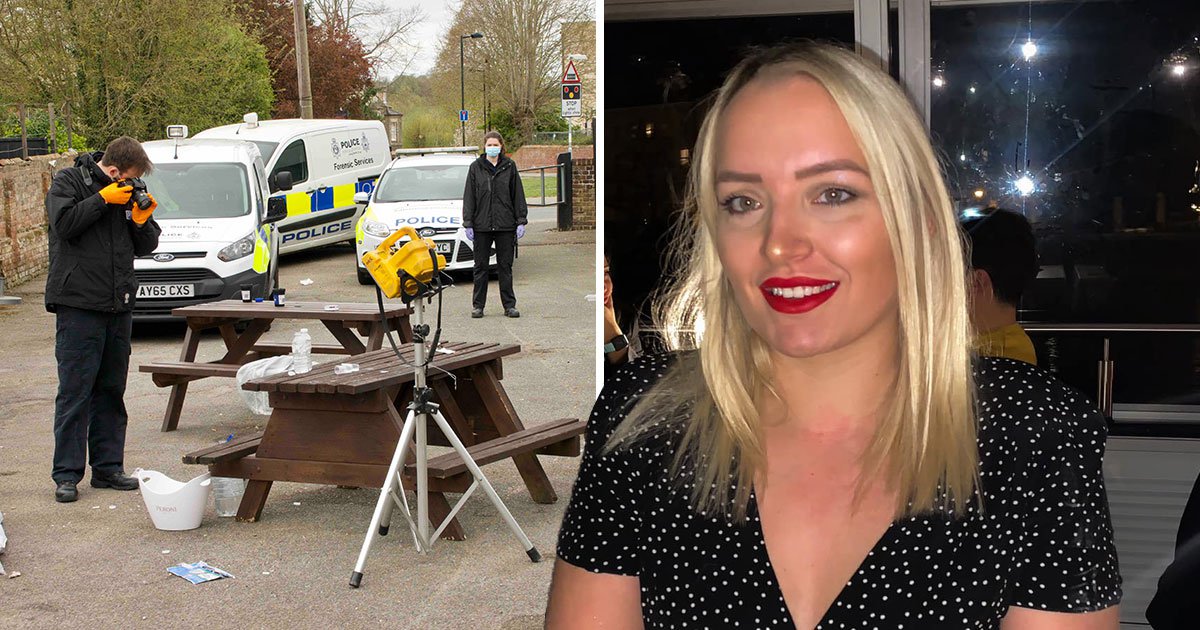 A children’s nurse has been left with life-changing burns after a portable heater exploded in a pub garden.

Ashleigh Charlesworth, 27, was seriously injured in the explosion at the Kings Head pub in Great Cornard, Suffolk.

She received burns to her face, chest and hands and two others – including Ashleigh’s cousin – were injured in the blast on April 24, which saw two air ambulances rush to the scene.

It is believed to have happened after a customer brought the heater to the pub themselves.

Ashleigh was taken to a specialist burns unit at Broomfield Hospital, in Chelmsford, Essex, where she was placed on a ventilator for two days.

She has been given a skin graft on her hands, and is now wearing a special face mask to help heal the burns.

Ashleigh’s dad, Paul Charlesworth, said: ‘[The cousins] were badly burned and taken to hospital. Ashleigh was put on a ventilator for two days and needed operations on her hands.

‘The doctors are trying their hardest not to do anything to her face as they hope the skin can heal itself.

‘She’s having to wear a special mask on her face still as these types of burns can carry on damaging skin for days.’

Ashleigh, previously a paediatric nurse at Colchester Hospital in Essex before moving to Virgin Care, was on a night out with her cousin at the time.

The heater had an open flame, and it is thought the blast happened when someone sprayed ethanol fuel onto the heater as a prank, and the bottle exploded.

‘I believe that the injuries were due to the actions of one drunken person,’ said Paul, who is 55.

‘Someone brought a heater to the pub but it exploded and Ashleigh and her cousin got sprayed in the face.’

The Colchester resident said it is too early to tell what degree burns Ashleigh has suffered.

He said: ‘She is in extreme pain and needs to have her skin chemically cleaned. What’s happened has only sunk in for Ashleigh over the last couple of days.

‘It’s so unfortunate as she is such a hero who does so much for the NHS.’

Stacey, Ashleigh’s sister, added: ‘She has quite deep burns along the left side of her face and around her left ear. It’s quite shocking – it’s not just a little scald.

‘She has had skin grafts on both her hands, which they have taken off her legs – so that’s another wound she has to deal with.

‘We haven’t really had a chance to have a look at her injuries yet because they’ve been bandaged up pretty much the whole time to help avoid infection..’

Stacey said her sister did not realise what had happened until after the heater had exploded.

‘Because Ashleigh was sat side-on to where the heater was, she didn’t actually see what happened until it was too late,’ she explained.

Suffolk Police is investigating the circumstances leading up to the blast.

The Kings Head pub posted on Facebook that it was ‘limited’ in what it could say due to the investigation.

‘We can however confirm that the heating appliance was not one supplied by the pub, but was brought onto the premises without our knowledge,’ it added.

‘Our focus is on supporting the enquiry that is taking place while keeping them, and their families, at the forefront of our thoughts and prayers during this difficult time.’

A police statement said: ‘Officers were called shortly before 10pm on Saturday, April 24, following reports of an explosion in the outside area at the Kings Head pub in Bures Road.

‘It is believed the fire was caused by a small portable fuel heater.

‘Emergency services attended including the fire service and ambulance service, and three people were taken to hospital for treatment.’

A man in his 20s who was burned has now left hospital. Ashleigh’s cousin, 27, is being treated at the Queen Victoria Hospital in East Grinstead which specialises in burns and reconstructive surgery.

A Suffolk Police spokesperson added yesterday: ‘The two females remain in hospital receiving treatment for their injuries. Their condition is described as stable and their injuries are life-changing.

‘No arrests have been made or charges. However, a man has been interviewed voluntarily regarding the incident. Enquiries are ongoing in regards to the circumstances.’

A GoFundMe page has been launched for Ashleigh while she is off work, which has so far raised more than £3,000.