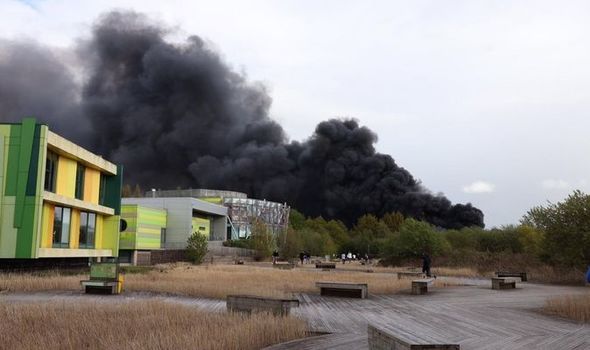 Huge swathes of dark smoke has been pictured close to the University of Nottingham campus in Lenton.

Emergency services have rushed to the scene as they look to bring the fire under control.

The fire can be seen by residents in nearby areas including Beeston and West Bridgford, Nottingham Live has reported.

Nottingham Fire and Rescue Service said they had been called tyo a “large industrial fire” on  Harrimans Lane in the Dunkirk area.

Crews from six different fire stations have rushed there to tackle the blaze.

A spokesperson said: “We are currently in attendance at a large industrial fire on Harrimans Lane in the Dunkirk area.

Local residents have also been adsied to keep their windows and doors shut.

The  Nottingham Fire and Rescue Service spokesperson added: “We are aware that smoke can been seen from a distance.

Michael Riley, who lives in Dunkirk, said he heard a “couple of explosions”.

He told Nottingham Live: “I know that they are taking water from two canals.

“I live a few miles away and I could see it from my house.

“I heard a couple of explosions, other than that I don’t really know.

“It was about half an hour ago.

“I spoke to someone down there, a business owner, and he said that something like this happens every six months or so.”

“If you can smell the smoke please keep your windows and doors shut.”