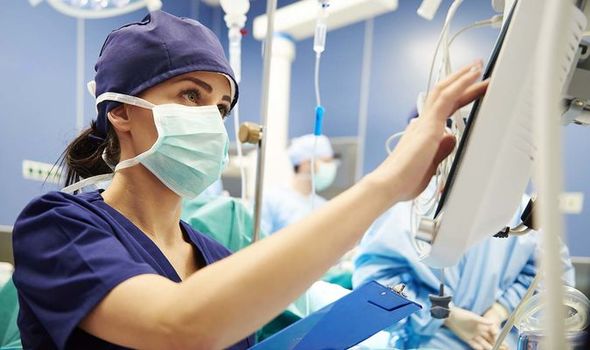 Health bosses said the situation is now so precarious that the quality of patient care is in danger as pressure intensifies. At least 24 NHS trusts have declared critical incidents because of staff shortages and rising Covid admissions. It comes as more older people are being admitted to hospital and the uptake of booster jabs is slowing in every age group.

That, coupled with traditional winter pressures, has created a perfect storm ‑ leaving services from emergency care to routine surgery on a knife-edge.

Matthew Taylor, chief executive of the NHS Confederation, the voice of the UK healthcare system, said: “The weeks ahead will be some of the toughest in the history of the National Health Service.

“Health leaders are battling an unprecedented staffing crisis. The quality of care is at risk of being compromised at a time of rocketing patient demand. NHS organisations do not declare critical incidents lightly but over two dozen have done so far.”

Mounting concern over the ability of the NHS to withstand a third successive winter wave comes as the UK reached another grim milestone.

More than 150,000 people have died from Covid within 28 days of a positive test since the pandemic erupted in March 2020. The UK is the first country in Europe to pass the figure.

Mr Taylor is demanding an urgent action plan to address the lack of “resilience” that has seen the NHS stretched to breaking point in the crisis.

He said: “The public inquiry into the pandemic will pose fundamental questions. It is crucial we learn the lessons.

“The NHS did not enter the pandemic in a resilient state following a decade of the lowest real terms funding increases in NHS history. That left us with 100,000 staff vacancies, run-down buildings, a lack of key equipment and without the effective testing capacity.”

Pressures are set to increase with a slowdown in the booster jab programme.

Data show fewer than half of all adults in some of the UK’s biggest cities ‑ including Liverpool, Birmingham, Manchester and Nottingham ‑ have had their third jab.

The UK also faces a shortage of fully-qualified surgeons as more than one million elective or non-urgent operations, in which trainees would have gained key experience, have been “lost” to the pandemic.

The monthly number is down 50 percent on pre-Covid levels in some specialities.

The Royal College of Surgeons warned around half of surgeons in their final two years of training are not meeting “the requirement on numbers and experience to graduate from the training programme”.

According to figures compiled by the Joint Committee on Surgical Training, some 1,142,967 elective operations that involve trainees assisting or being supervised by a consultant have gone by the wayside.

Meanwhile, two-thirds of UK doctors have told the British Medical Association the spread of the Omicron variant is causing a dramatic slowdown in the provision of non-urgent medical care.

A snap survey showed one in five GPs has had to self-isolate in the past fortnight.

Nine in 10 said clinical colleagues had to take sick leave or self-isolate within the same period, but less than half said they could always access lateral flow tests.

“We currently have a record-breaking waiting list stretching to almost six million.

“These are people in distress, 312,000 of whom have already been waiting more than 12 months. As doctors, it is our job to provide the care they need and it’s incredibly distressing when we can’t do that.”

To add to the crisis, from April all frontline NHS staff in England will need to have the Covid jab ‑ or be redeployed. The boss of one of London’s busiest hospitals is worried about losing medics as a result.

King’s College Hospital chief Clive Kay said his job was to encourage workers to get jabbed ‑ but 10 percent of his 14,000 staff remain unvaccinated.

A similar policy is in place in social care in England ‑ with care homes saying it has compounded staffing issues. The NHS is short of about 93,000 workers.

Hospitals are also under pressure from bed-blocking, where patients healthy enough to leave wards are unable to do so because councils do not have space in care homes or staff to care for them at home.

One NHS trust recently turned a hotel into a care facility. Staff from Spain and Greece were flown in and at least 30 patients were discharged to stay with live-in carers at the Plymouth Hotel, Devon.

Meanwhile, some resourceful paramedics are helping to relieve the pain, stress and boredom for patients waiting for up to seven hours or more to be admitted ‑ by letting them watch Netflix on their iPads.

Tracy Nicholls, of the College of Paramedics, said: “Paramedics are apologising for waits and distress. I’ve heard some crews have streamed Netflix on to trust iPads and strapped [these] to stretchers.”

We are under so much pressure right now that, despite being two years into this pandemic, the Government has once again been forced to deploy the Army to help out.

Health leaders are facing an unprecedented staffing crisis with nearly 40,000 currently off for Covid reasons, while hospital admissions have reached 16,000 in the UK. This rate is doubling roughly every 12 days.

The quality of patient care is at risk of being compromised at a time of rocketing demand. NHS organisations do not declare critical incidents lightly but over two dozen have done so.

Sadly hospitals which had started to make inroads into long waiting lists have once again cancelled non-urgent operations.

As the UK hits the sad milestone of over 150,000 lives lost to Covid (the real toll is almost certainly considerably higher), we must acknowledge that this virus continues to represent a substantial threat to the UK’s health and wellbeing.

This is despite everything the NHS is doing to support patients ‑ with antiviral treatments and the success of the vaccination programme for example.

For all the good news about the Omicron variant being milder, we still don’t fully know yet how it will impact the population at large and especially older people.

There are a number of steps the Government could potentially take right now to offer some respite.

These include prioritising access to Covid tests for key workers ‑ including NHS and social care staff ‑ considering short-term deployment of clinical students on towards and into other healthcare settings, reviewing the self-isolation period and ensuring patients can be discharged from hospital as soon as they are medically fit to leave.

In the longer term, it is surely a duty to those we have lost, and those who have been bereaved, that we build a National Health Service capable of not just addressing the backlog of care that has built up over the past two years, but one that has the resilience to deal with future pandemic shocks and be the envy of the world once more.